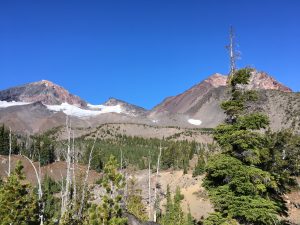 [I’m way behind on these, but will try to catch up…]

After getting spanked by rain in the Cascades, and not feeling all that motivated, I headed south with some stops for peaks along the way. I had already done South Sister during my quest for ultra-prominence peaks, but there are several other prominent volcanic peaks in the Bend area. I had been turned around before by poor conditions on North Sister, probably the most technical Cascades volcano. All of the volcanoes are made of garbage rock, so most are non-technical mounds. However, the easiest route up North Sister finishes on a steep, north-facing gully that often holds some amount of snow and ice. 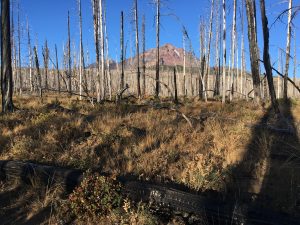 I started out through the ugly, burned forest shortly after sunrise, jogging some of the downhills on my way to Soap Creek. I passed a camp there, turning uphill on a trail that climbs gradually toward Squaw Creek and Middle Sister. Where the trail crosses Squaw Creek, a fairly obvious use trail continues upstream toward the toe of the Hayden Glacier. The trail was dusty and monotonous while in the unburnt woods, and downright unpleasant in the burned areas, but lots of people seem to backpack in the area. 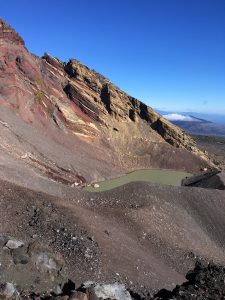 Following a track downloaded from Peakbagger, I left the fading use trail in a flat area, struggling up a sand-hill to North Sister’s southeast ridge. Once on the ridge, I struggled up through more brush and sand, eventually finding a faint use trail where the ridge narrows. From there, I dodged cliffs and gendarmes to one side or the other, eventually reaching the point where the southeast and southwest ridges join at the south end of North Sister’s summit ridge. 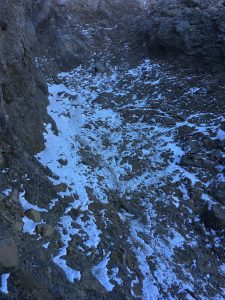 Following a clearer use trail, I contoured around the west side on a mixture of rotten rock and nasty, steep dirt, eventually reaching the base of the steep gully leading to the summit. Here I found a surprising amount of climber garbage, including not just the expected webbing anchors, but a complete 70m rope seemingly left in place for single-strand rappels. Last time I had been turned around by brittle ice on this final pitch. This time, although it had snowed some the week before, not enough remained to defeat me, though what was left was rock-hard and icy. I carefully made my way up the class 2-3 section, stepping on rocks, grabbing one side, and sometimes kicking steps. 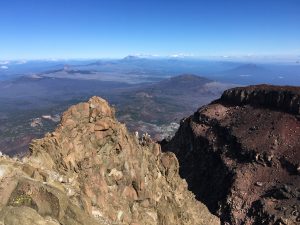 The class 4-5 section was fairly spicy with the old snow. I started on the right, then made a delicate traverse into a corner on the left, where stemming made the climbing a bit more secure. Reaching the easier ground below the twin summits, I found yet more climber garbage in the form of two fixed lines, one to the true (left) summit, the other leading from near the right summit down to the top of the rappel rope. I went left first, tagging the summit before removing the fixed line on my way down. I left it near the top of the route, then went over to tag the other summit, and to remove the other fixed line, the rap rope, and as much of the anchor as I could. 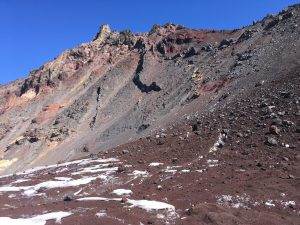 I stuffed some of the junk in my pack, tied the rest on the outside, then awkwardly downclimbed to the base. The rap rope got caught a few times, but I eventually managed to get it down. With two fixed lines, a 70m rope, and a mess of tat, my pack bit painfully into my shoulders as I traversed back south, then hiked and carefully slid down to the upper Collier Glacier at the saddle between North and Middle Sisters. I had had enough of carrying the tat-pile, so I left it at the saddle before climbing, figuring I could pick it up on my way down. 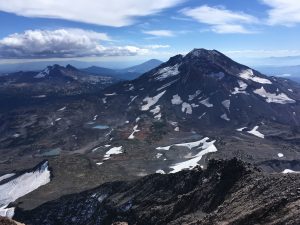 I found a few footprints on the glacier, and various use trails making their way steeply up Middle Sister’s north side. I had the summit to myself for a few minutes, watching as a group made their way up the south ridge to join me. They didn’t seem particularly talkative, so after a bit of stilted conversation, I retraced my steps toward the saddle. 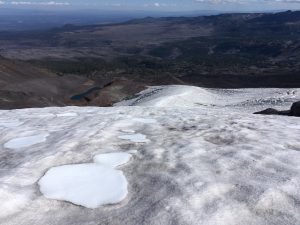 The Hayden Glacier looked much more pleasant than the neighboring, nasty volcanic moraine, so I hopped on that before point 9312′. The surface was just soft enough that I could carefully make my way down a ridge on the left-hand side, skirting the crevasses near the middle. I eventually ran into crevasses lower down, and actually had to think a bit to make my way through the crevasse maze without an ice axe or crampons. I eventually ran into some boot-prints making their way up from the left side, and soon thereafter dismounted onto slabs and moraine, finding the upper end of the use trail I had followed in the morning. I passed a variety of backpackers and day-hikers on the way back, including a couple with a dog, bizarrely being carried by the man. I didn’t ask why. I jogged the final, dusty descent to the trailhead, then rinsed off my feet and legs before continuing to Bend for supplies.