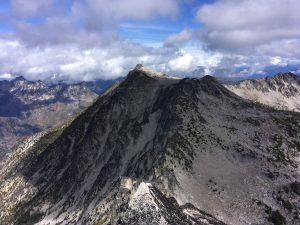 The western Cascades were generally making my life miserable, with constant rain, changing a flat tire in said rain, driving 10 miles of gravel on a doughnut spare afterwards, etc. Finally, I got sick of the abuse and headed over to the east side. The forecast was still not great, but it had at least a chance of being drier, and I had some peaks to deal with there. Enchantment and Cannon are two high but otherwise unremarkable summits in the Enchantment area southwest of Leavenworth. I had hoped to do them with McClellan earlier this summer, but was rained out. This time, I returned toward the dry end of the season, and experienced cold, cloudy conditions, but fortunately no rain. I hope this will be the last time I have to hike the the dusty trail to Colchuck Lake, or descend the miserable talus of Asgard Pass. 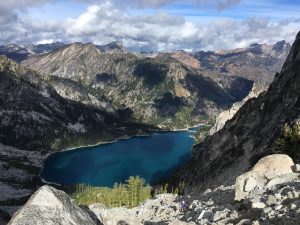 I camped at my usual spot, then drove up to the popular Stuart Lake trailhead for a late-ish start. I expected it to be mostly full on a summer Friday, but there were still many spots in the large lot; perhaps the forecast had scared people off. It was chilly and cloudy, and I started the hike in my hoodie. I have not been in the Cascades this late in the year before, and when it is not raining, the Eastern Cascades are much more pleasant than in June and July, when they are unbearably hot. 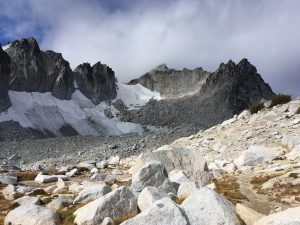 I passed the usually tourists and campers at Colchuck Lake, then slogged my way up the braided trails to Asgard Pass. Some dude, apparently concerned for my safety, yelled that I was going the wrong way when I headed right of some cliff band. I took out my earbud long enough to give him a polite version of “yeah, whatever,” then continued following my use trail, which required a few third class moves getting up a rock band. At the top, I checked out the remaining permanent snowfields, including a nasty, icy thing on the descent route from Dragontail, then took off across the dry plateau. 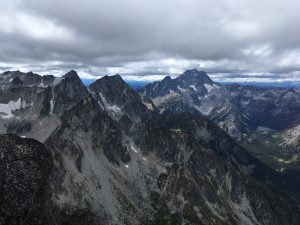 I soon left the trail, diagonaling across sand and rocks toward the two bumps of Enchantment’s summit. I contoured under the west one, passing through some cliffs on a ledge, then climbed a rockpile that might or might not have been its highpoint. The eastern summit looked a bit higher, and that is evidently where most people go, so I hiked over there, then made a short third class scramble up the west side of the summit knob.

There is a ridge between Enchantment and Cannon, but it looks tricky, so I dropped down to Prusik Pass, then followed occasional cairns and bits of use trail past a small, unnamed lake, then up sand and scree to the broad plateau below Cannon’s summit cone. I climbed a short third class summit block, then made my roundabout way back home via Prusik Pass. There were the expected campers, and some mountain goats who were unnervingly unafraid of me, but the place was surprisingly quiet for summer in the Alpine Lakes. There were only a few cars parked down the road when I returned to the trailhead in the mid-afternoon. I went into town to check the forecast (bad), then to choose a suitably unambitious goal for the morrow.