Looking around for something to do on a day with an unsettled forecast, the Aletschhorn seemed like a good prospect. Though it is a fairly long, hard day from Blatten, with a bit over 3000m of climbing thanks to some up-and-down along the way, it is not technically challenging or committing, and involves relatively little glacier-work. On a clear day, the summit offers a bird’s-eye view of the konkordiaplatz, where the Grosser Aletschfirn, Jungfraufirn, and Ewigschneefeld join to form the Grosser Aletsch Glacier, the largest in the Alps. Though it is much diminished, it is still very much alive, and remains around 800m deep at the junction.

I scouted out the route out of town, then settled in to sleep in Blatten’s car park (sigh…). (Side note: Most Swiss car parks print tickets reading “hertzlich wilkommen,” or “hearty welcome.” Blatten’s instead read “hexlich wilkommen.” It turns out that there are legends of witchcraft in Belalp, and even an annual witch-themed ski race.) I got started up the trail to Belalp around 4:00, and hiked by headlamp past the Hotel Belalp and down a steep descent to the trail traversing below the Oberaletsch Glacier. I finally put away the headlamp a bit after 6:00 — the days are getting noticeably shorter.

This approach has more annoyingly unnecessary climbing in addition to the return climb back to Belalp. The Oberaletsch Hut is about 100m above the glacier, which is bad but to be expected. However, after crossing a bridge at the glacier’s toe, the trail to the hut takes a rolling line along the glacier’s east side that often rises well above the level of the hut. The first part of the trail passes through several gates separating fields for cows and sheep, many of which were sleeping on the trail when I passed in the morning. I was almost tempted to hike up the glacier from the bridge, but saw no cairns or bits of path, so that would have been a wretched moraine-slog.

I startled a couple washing up outside the hut around 8:00, then took the ladders and steps down to the glacier. Of all the big Bernese glaciers I have seen, the Oberaletsch is in by far the worst shape, with large watercourses cutting the ice near its tongue, and a rocky surface for most of its length. As I approached the Aletschhorn, I saw why: the valley glacier is all but cut off from the cirque of steep glaciers that once fed it, with only one thin connection still extending down from the Schinhorn to its west. Though the corpse will take awhile to melt, I suspect the valley section will be dead soon.

The first trick in climbing the Aletschhorn’s standard route is getting back up off the glacier. The route description on my phone mentioned some reflective markings, but I did not see any, so I plotted out my own right-to-left traverse up the lateral moraine, trying to follow the more stable spots with plants on them, and crossing loose streambeds where possible. I eventually found a line of cairns and a faint trail, which is much easier to find and follow on the descent. With one inexplicable detour to the right, corrected by some fourth class climbing, I got back on the crest of the southwest ridge, where I found some useless cairns on a nice, stable talus-hop. Large cumulus clouds were building over the Rhone Valley, so I tried to climb as quickly as possible in my increasingly worn-down state.

The ridge is split partway up by a crevassed glacier, which could have been tricky, but was fortunately mostly dry. After an initial steep bit getting up off the rock, I made my circuitous way up to the left, then back right of the upper ridge, and finally left to get back on the rock, finding an old boot-pack near the end. I was once again surprised to meet no one else on either the route or the summit, and to find in the register that no one else had summited earlier in the day. This would be unheard-of on a moderate 4000m peak across the valley to the south.

Back on the rock, I hiked up some choss, then followed a line of belay posts up fun and fairly solid class 3 rock to the summit. The clouds were still building, but I was pleased to see that I had made it in time to get a clear view of the konkordiaplatz and the “head-ices” of the Grosser Aletsch Glacier to the northeast. I took some time to enjoy the views and the rest of my giant cheese sandwich, then got out of there with some haste. The clouds didn’t look too serious, but the summit cross had a nice melted spot.

I followed the trail on the way down, which takes a more direct line down the lateral moraine. The crux of the route was at the very bottom, where it descends steep, rock-hard dirt with loosely embedded rocks, terrain I find far more threatening than steep rock. It started drizzling a bit as I hiked down the glacier, and picked up a bit as I climbed the cold, wet ladders toward the hut. I tried putting on my poncho, found that it blew around too much to let me climb, and ended up just putting up with the rain and climbing as fast as I could.

The rain stopped just after the hut, and the clouds kept temperatures comfortable for the rest of the hike. I passed about a dozen people headed for the hut, then a herd of curious goats on the traverse toward Belalp. Not being familiar with farm animals, I gave them a wide berth instead of shooing them out of my way. I did not feel like climbing back up to Belalp, so I took another trail that supposedly also led to Blatten, hopefully with less climbing. It turned out to be just as bad, descending toward a reservoir before switchbacking up steeply to meet the trail I had taken in the morning. Oh, well. 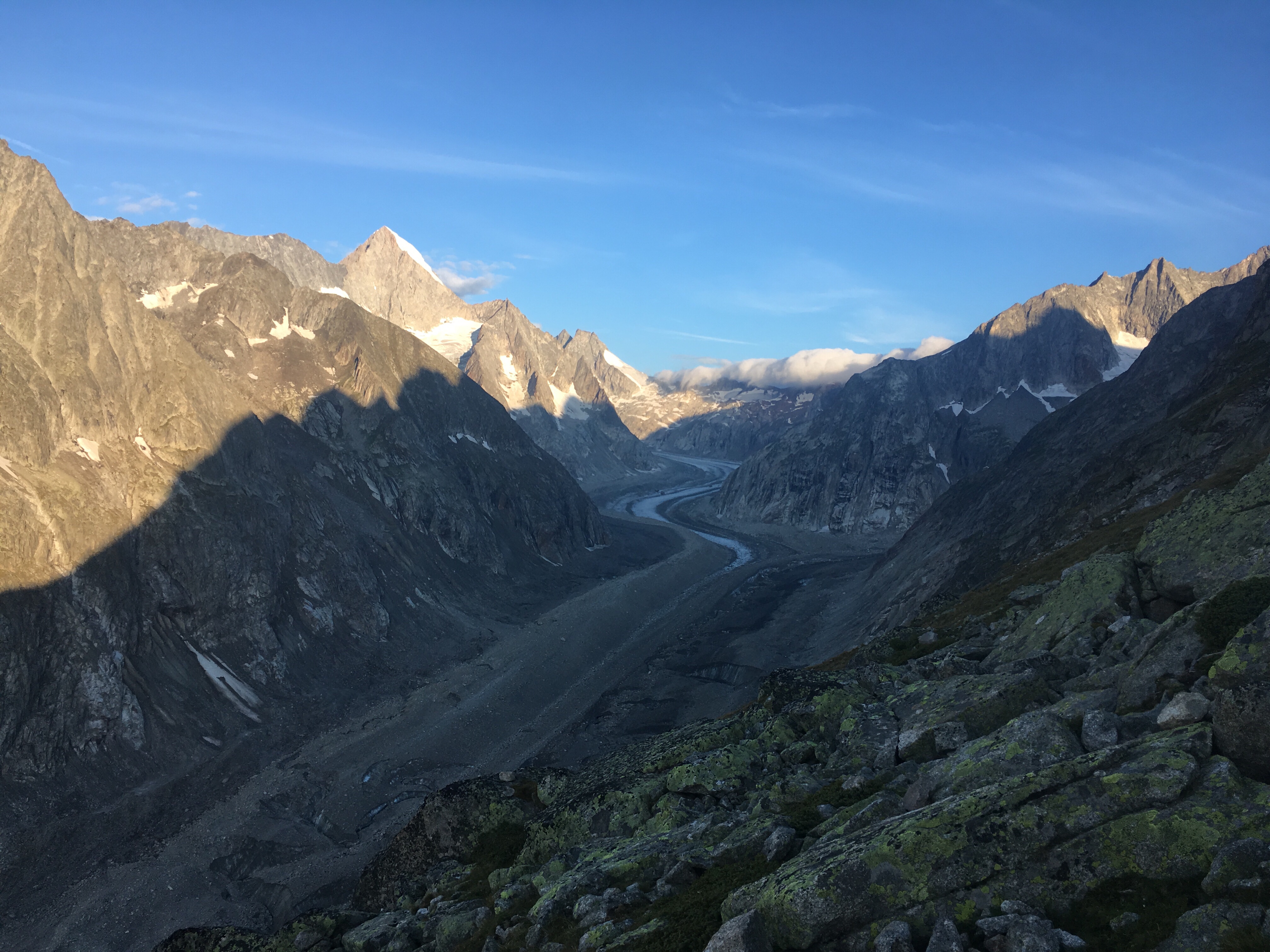 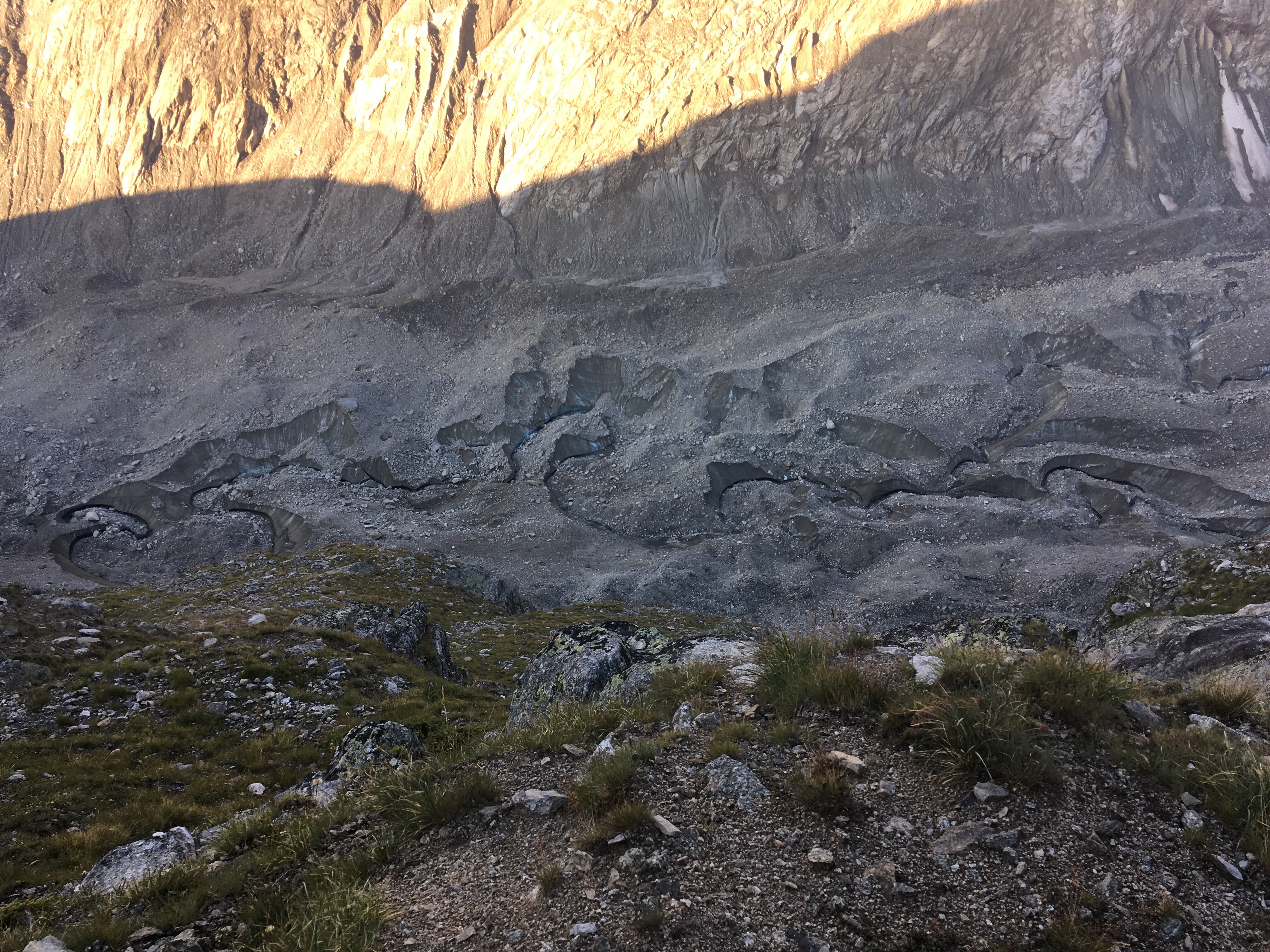 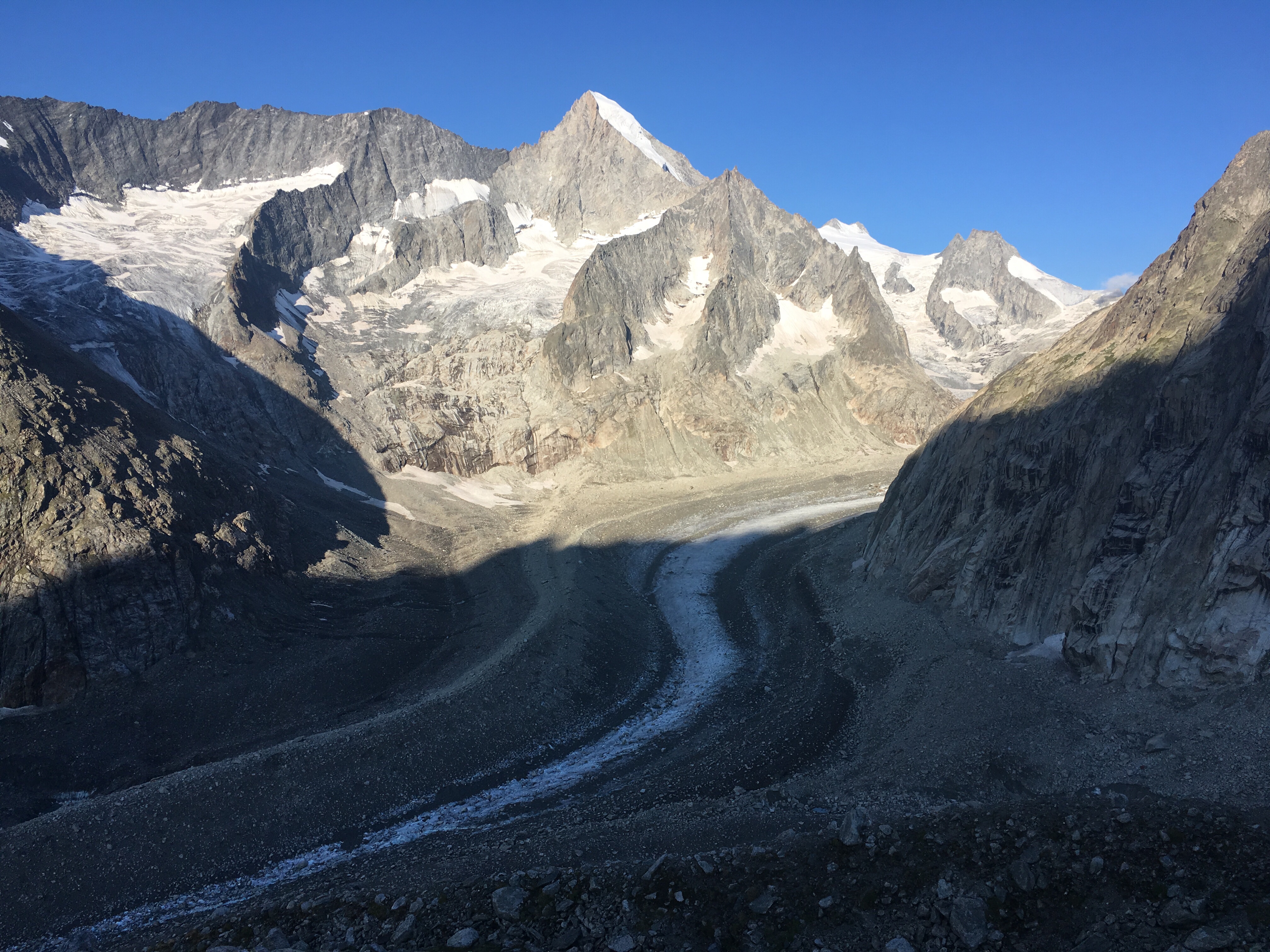 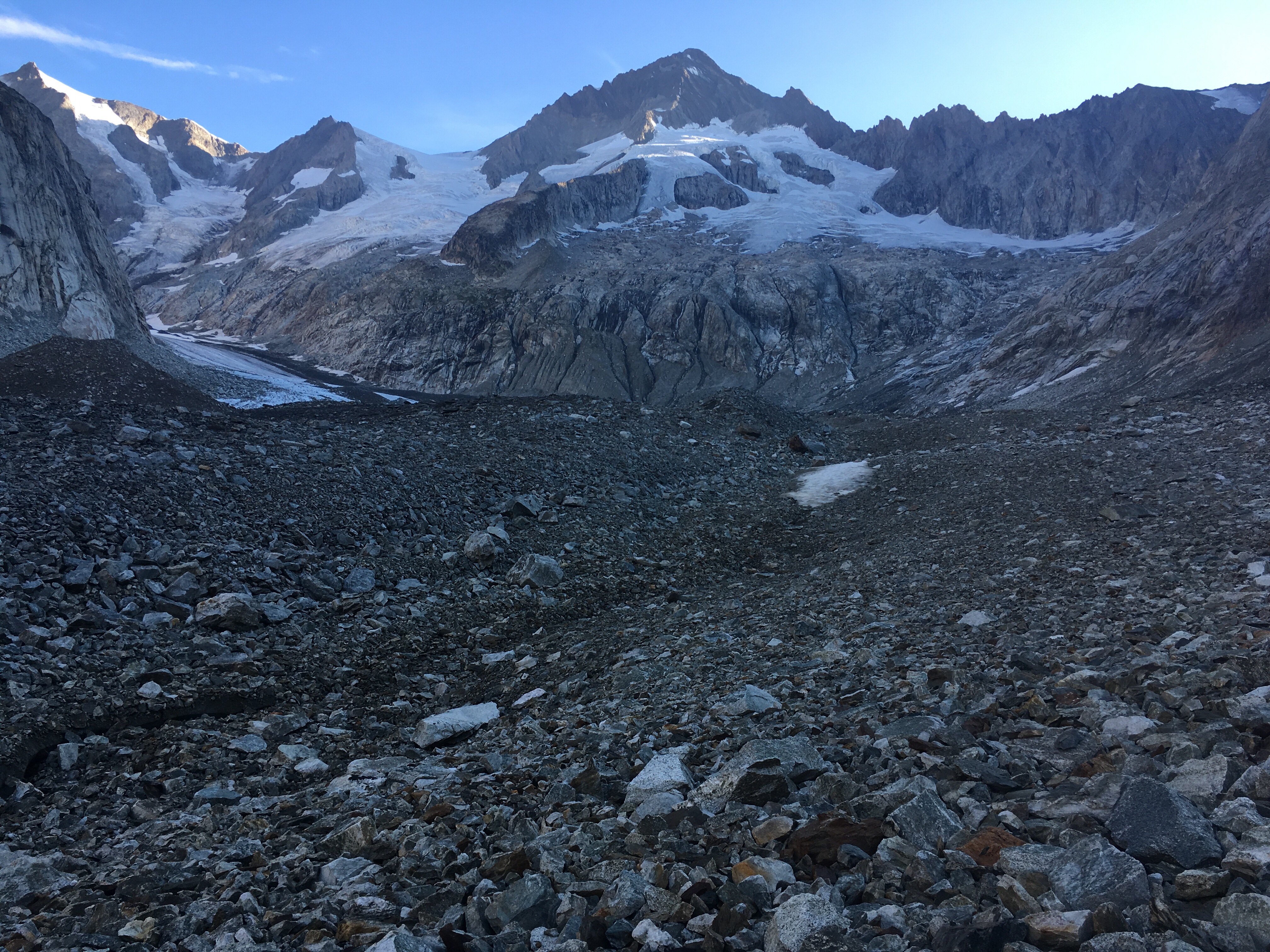 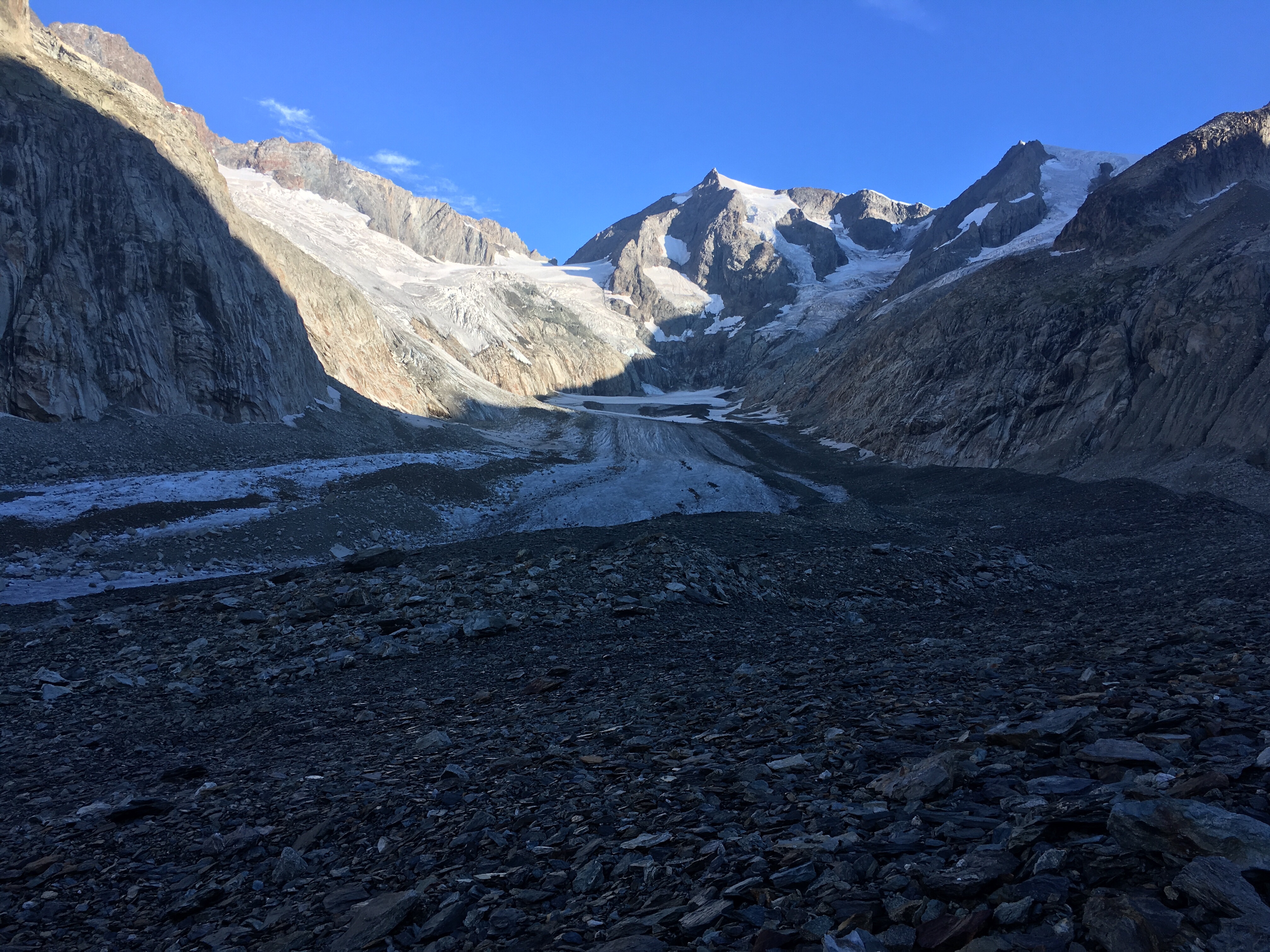 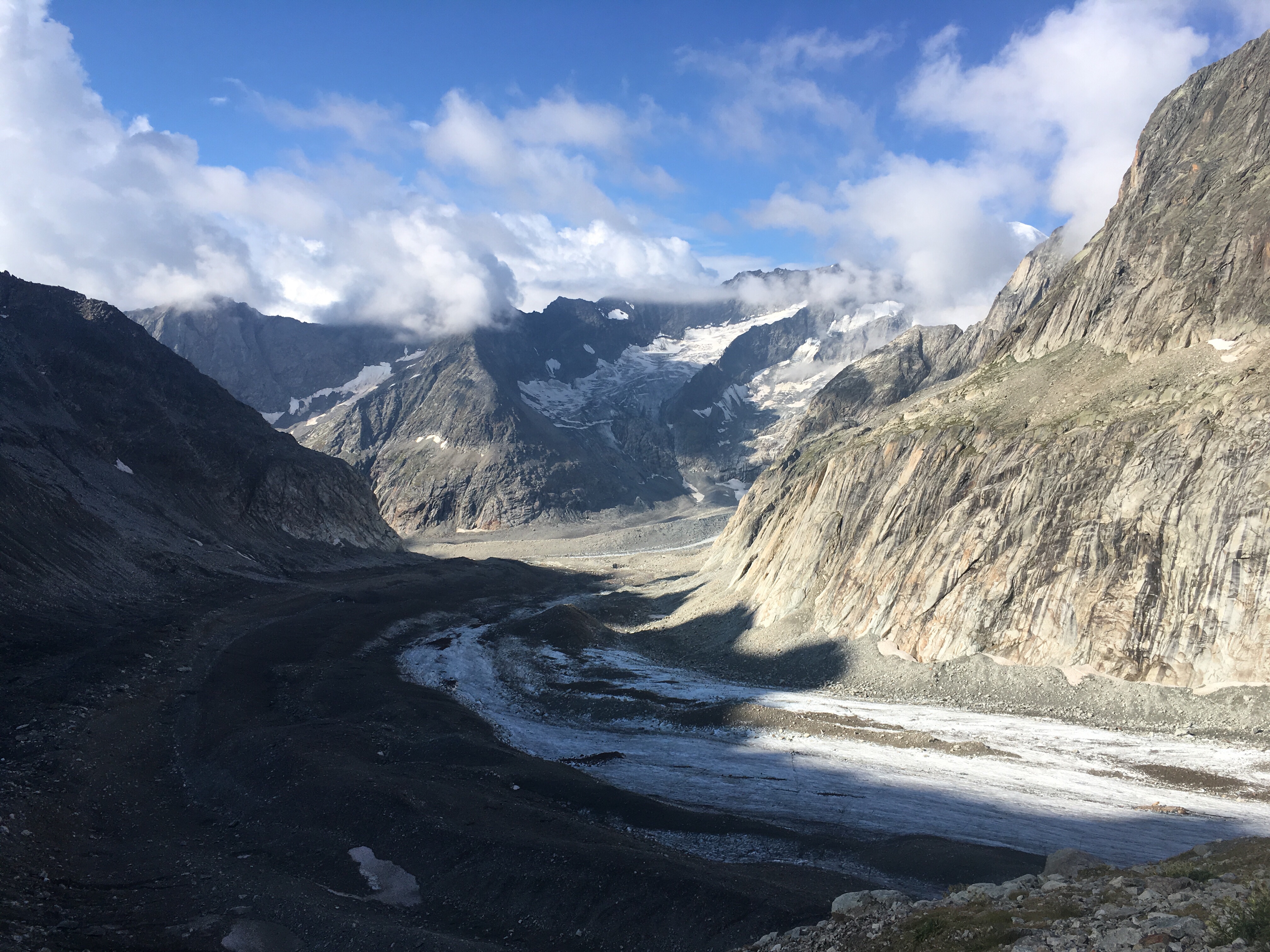 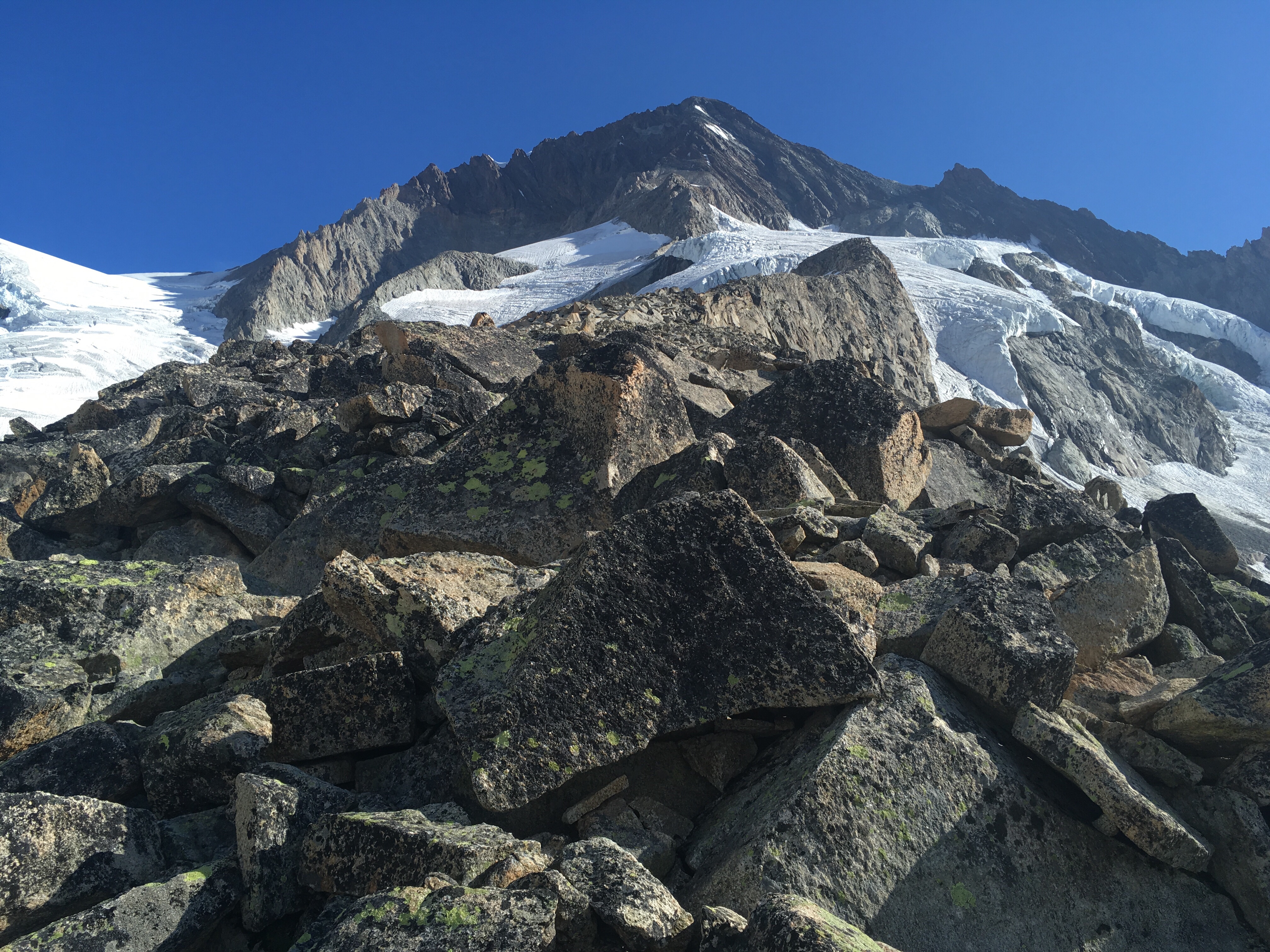 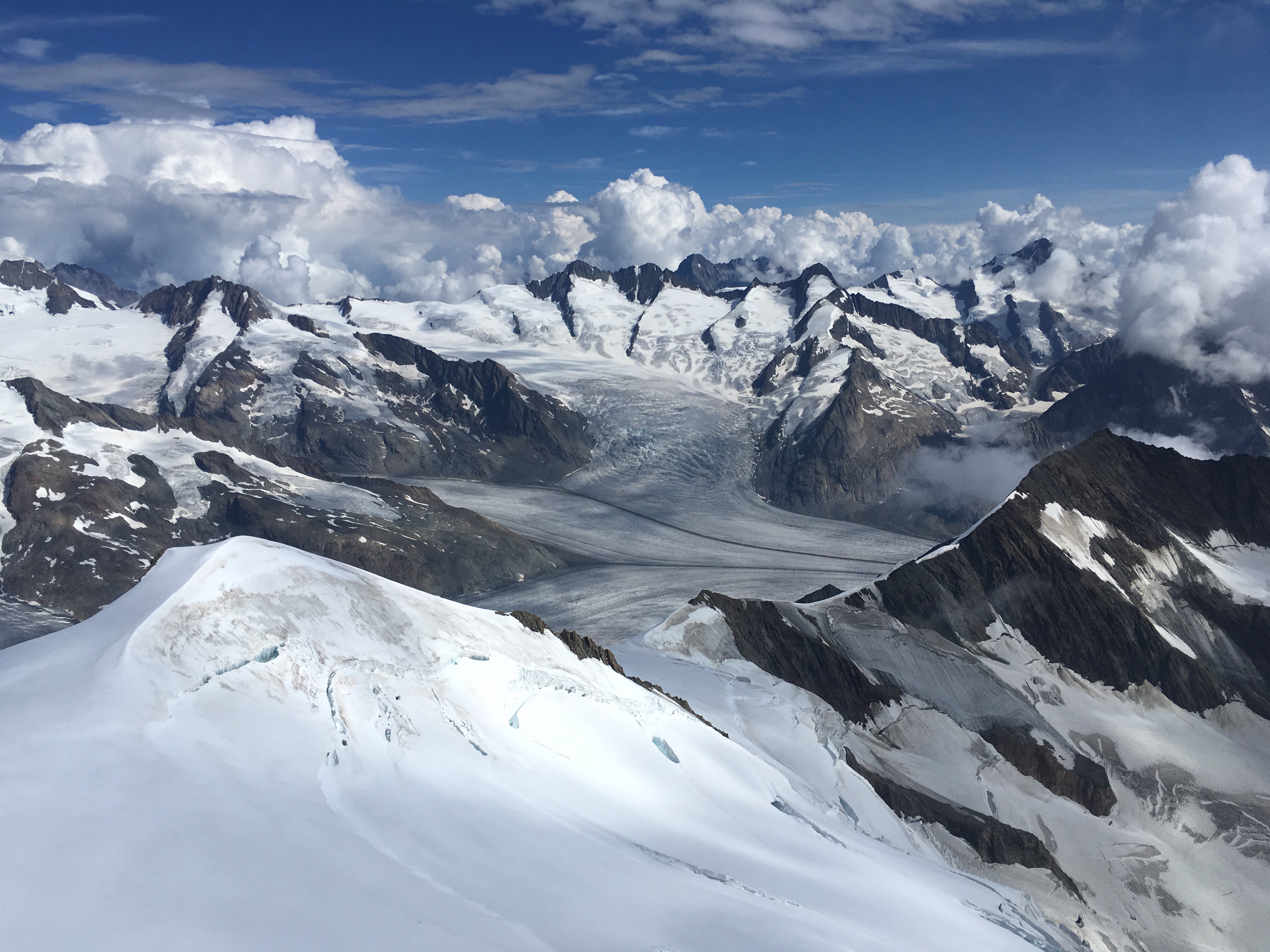 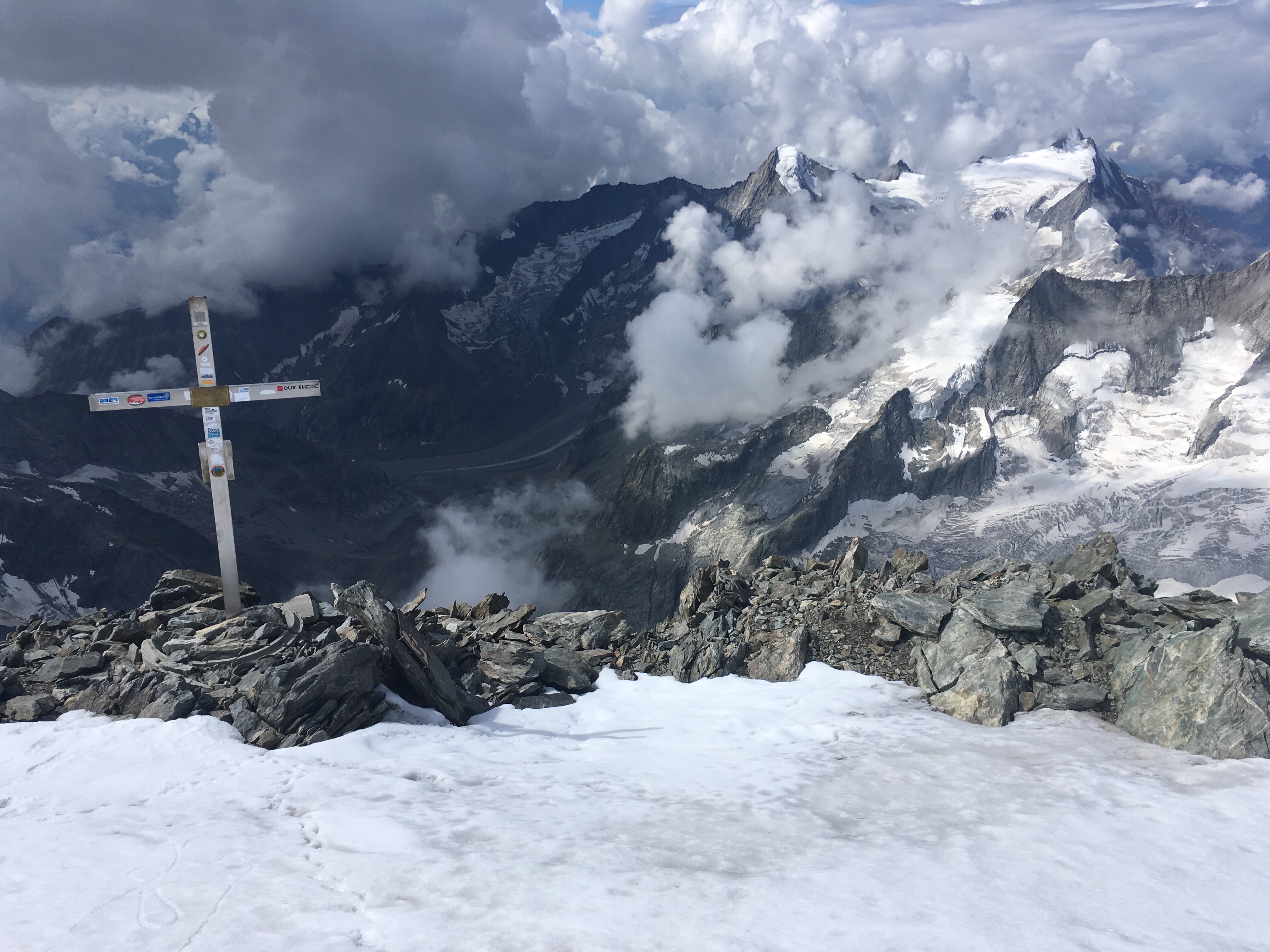 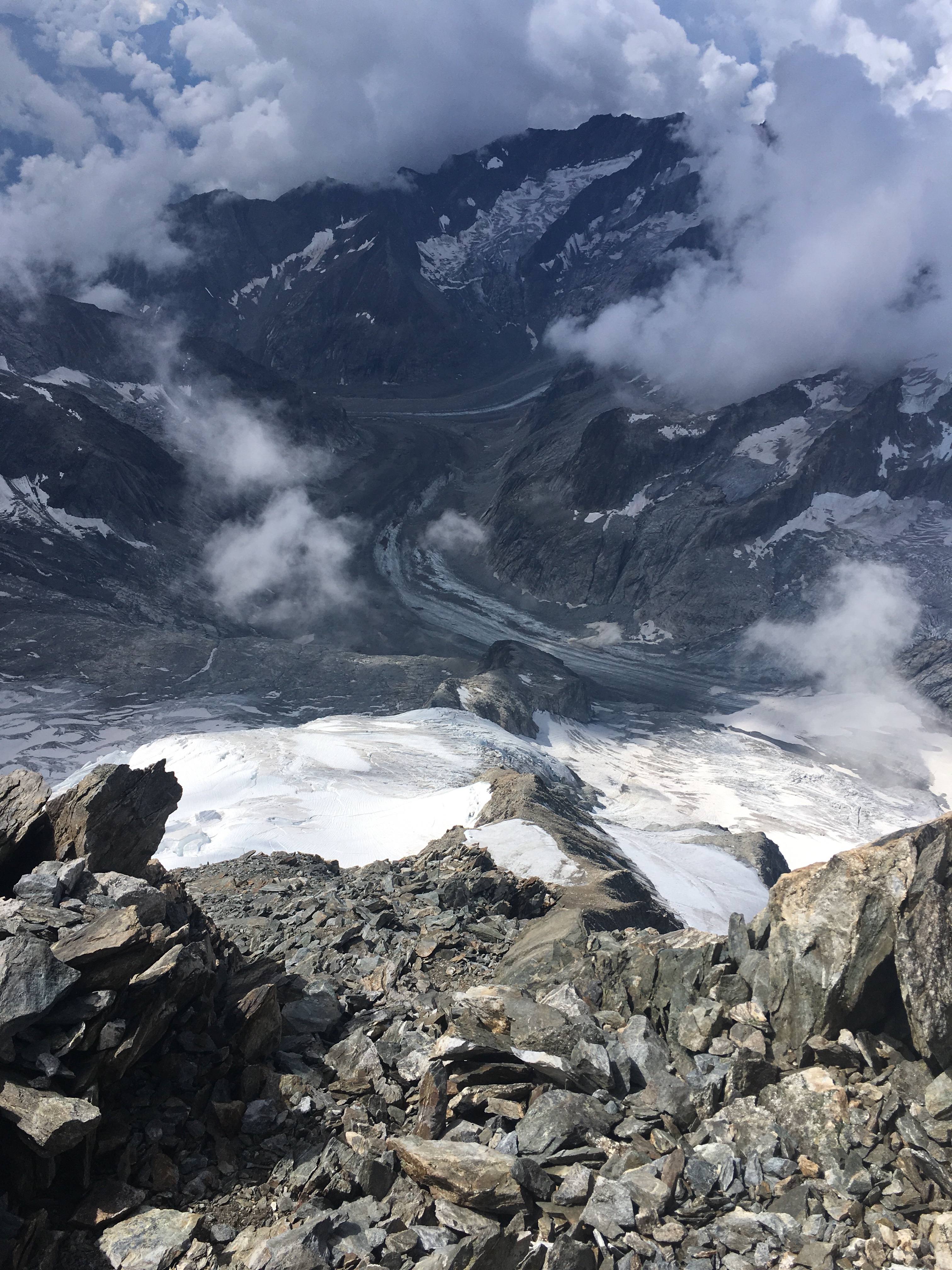 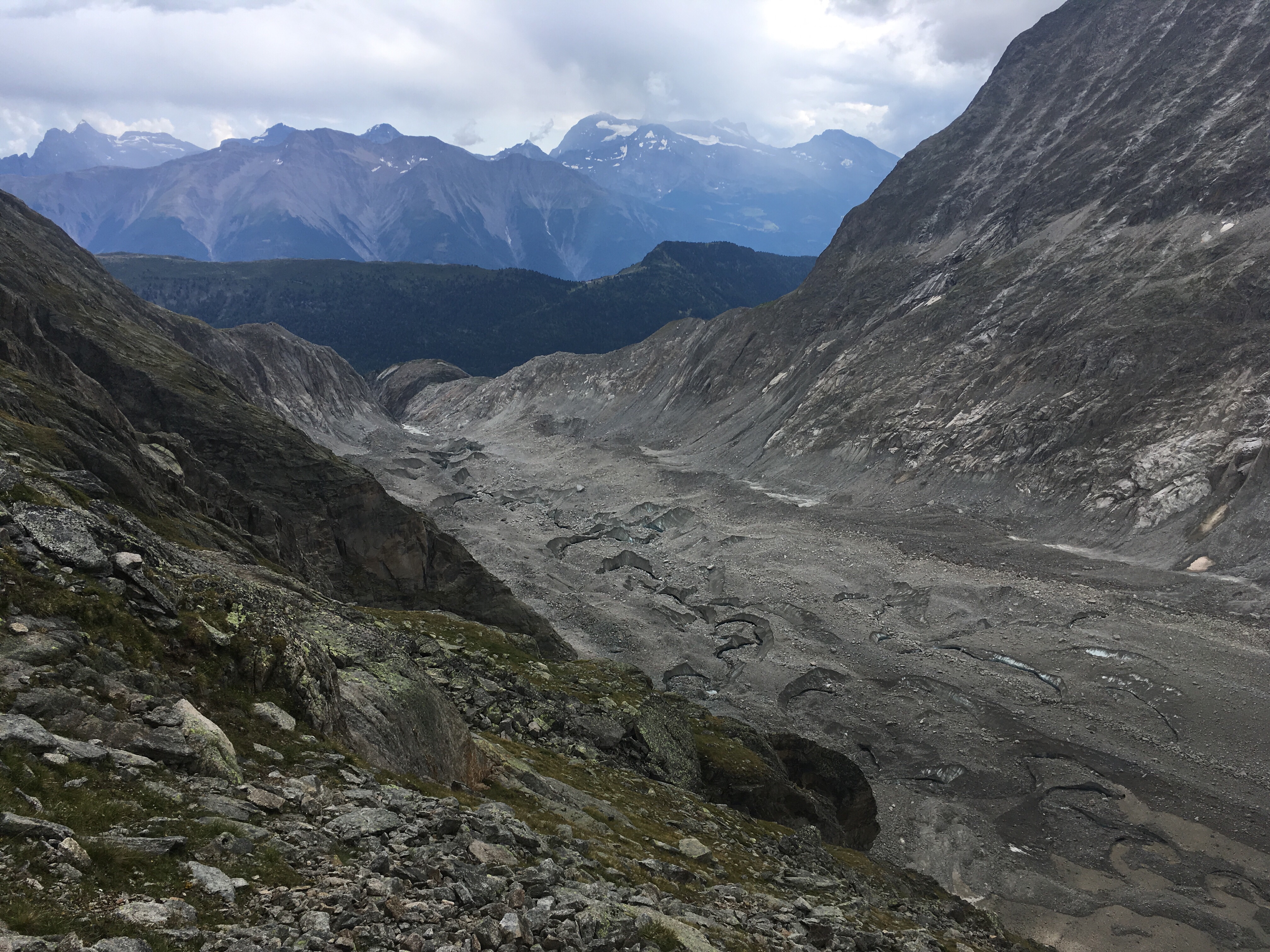 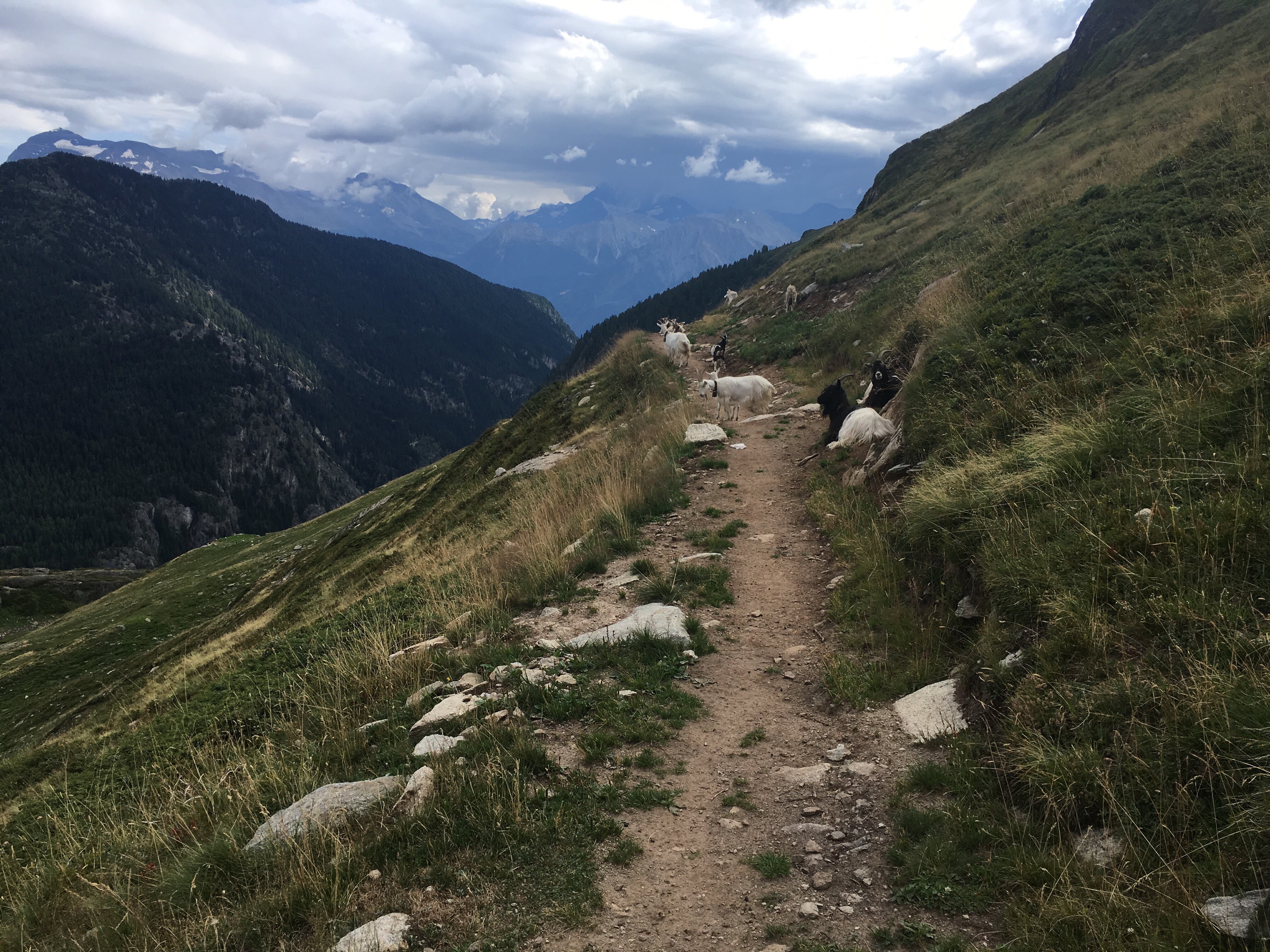 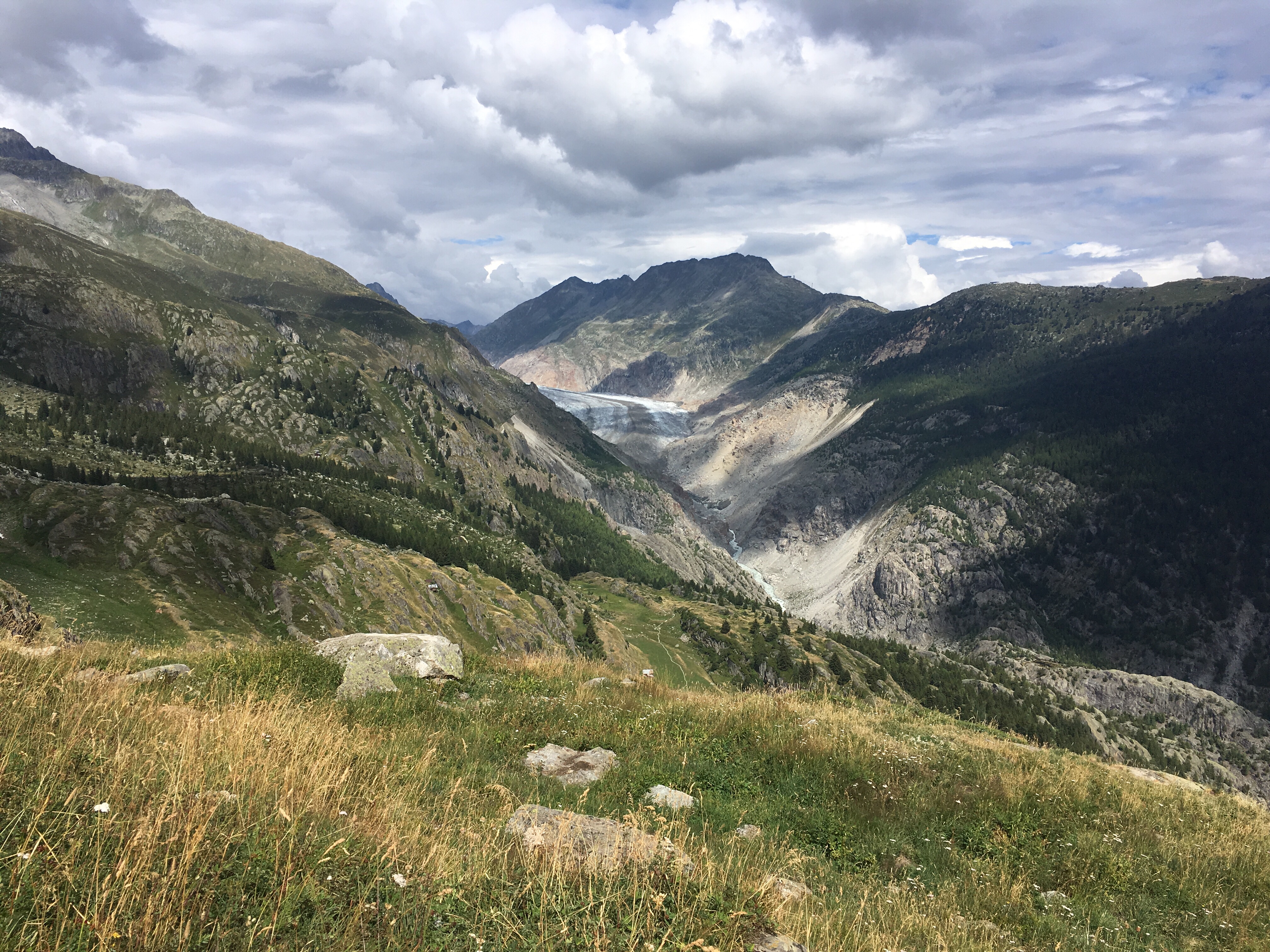