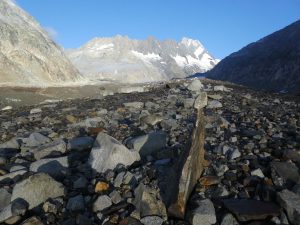 The Lauteraarhorn is one of the lesser 4000m peaks, barely exceeding the magic threshold and having just over 100m prominence above the lowpoint of the ridge connecting it to the nearby Schreckhorn. However, being an “amphitheater peak” surrounded by greater summits, it has one of my favorite summit views in the Alps so far, with the Schreckhorn and Finsteraarhorn looming nearby, the Jungfrau, Mönch, and Eiger rising farther to the west, and the Unteraargletscher flowing back east. Like the Finsteraarhorn, it can be reached from near the Grimsel Pass, saving me some driving. The approach crosses the dam, then follows a trail through a tunnel and around the Grimselsee before ascending the Unteraar, Finsteraar, and Strahleg Glaciers. Most people spend a night at a small bivouac hut above the Strahleg Glacier, but that, of course, is not how I roll.

(Richard Goedeke, in his guidebook, amusingly remarks that “[u]p to 1976, an ascent still meant a voluntary bivouac had to be planned, but it should be remembered that in the days of the pioneers, this was the norm everywhere.” Elsewhere, he writes of the Marguerita Hut on the Signalkuppe that “this is a place in which one can take in the magic of a breathtaking evening at very high altitude and morning moods at leisure, without all the rigmarole and paraphernalia of bivouacing.” I wholeheartedly join him in his disdain for the barbaric practice of camping. I can only imagine his horror upon learning that it is popular in the United States to go on multi-day “voluntary bivouac” trips without climbing any peaks.)

I had spent most of the previous day sitting in the car, listening to the steady drizzle as I caught up on reading and writing. It was still raining as I tried to go to sleep, and I woke at 3:30 to a fog so dense that I could barely make the drive down to the Grimsel Hospiz. Fortunately this is a Swiss mountain road, so it is wide and has lane markers, unlike the Italian ones to which I have become accustomed. I had scouted out the start during a break in the rain the day before, so I knew which stairs to take down to the dam when I finally started out around 4:20. The tunnel was much easier by headlamp, and I knew to avoid the big puddle near the start. 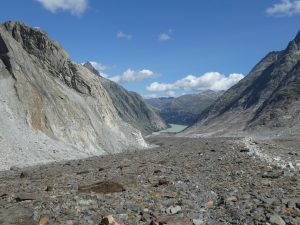 I cranked out the rolling hike around the lake by headlamp, then stupidly continued following the trail to the Lauteraar Hut. Why “stupidly,” you ask? Because, like many of the huts in the Bernese Alps, this one was built back when the glaciers were much larger, so it now sits hundreds of feet above the ice, or in this case, the morainal debris covering the ice. The rain and fog had soaked all of the vegetation, but the broad trail spared me a Cascades-style leg-washing as I switchbacked away from where I wanted to be and toward the hut. I took in a good sunrise view of the Lauteraarhorn, then wandered around in confusion for a bit before finding the path down to the ladders. This path was not wide enough to spare me a soaking, ensuring that I would pulverize my feet on the hike out. The ladders were all solid and orderly, not some Italian nightmare, but there were a lot of them, and they were all cold and wet. 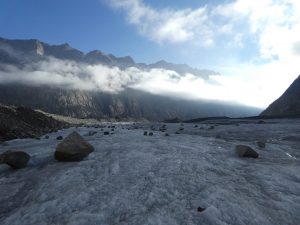 Detour complete, I began hiking up the Unteraar Glacier, following a lattice of cairns, metal poles, and occasional bits of path. As soon as I reached the sun, I stopped to wring out my socks, hoping to spare my feet. The glacier is mostly rocks up to where the Finsteraar Glacier splits off, with a currently-dry stream-bed splitting it down the middle. The best path seems to stay on the right-hand side most of the way, then descends to the stream-bed, following it a bit before finally getting to the bare ice of the Finsteraar Glacier. The ice was all dirty or crunchy enough that I did not need crampons; indeed, unlike the Finsteraarhorn experience, most of my gear stayed in my pack this time. 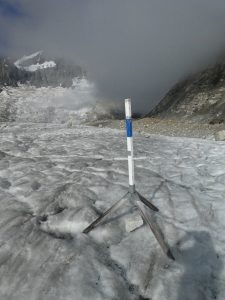 Partway up the Finsteraar Glacier, I picked up a line of markers, blue and white wooden poles on tripods with rocks hanging beneath them. These led up the ice for awhile, then up the lateral moraine of the Strahleg Glacier and on to the hut, an unpleasant-looking little box high up on the cliff to the right. I had no use for that, so I traversed back onto the ice and continued up-glacier, looking for the prominent couloir leading to the southeast ridge. 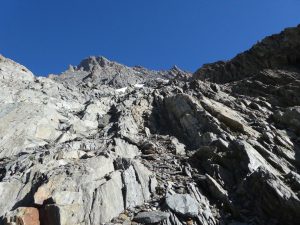 Goedeke recommends getting up and down the couloir early, due to dangerous snow and cornices. Alternatively, one can just wait 20 years, and find that the couloir is mostly bare rock. It took me a few minutes to recognize the feature, but I soon found a left-trending ramp leading into it, and some boot-prints. Ex-couloirs are normally unpleasant, but this one was not bad at first. The upward-tilted rock layers had been planed off, creating sticky textured slabs that were easy walking. At the level of a small hanging glacier, I should have gone to the ridge at the far left. Instead, I stayed too far right, and ran into more typical ex-couloir conditions, with loose rock and a bit of fresh snow from the day before. I struggled up this, linking outcrops of more solid rock and trying to make my way left, and eventually got back on-route just below a col around 3900m. 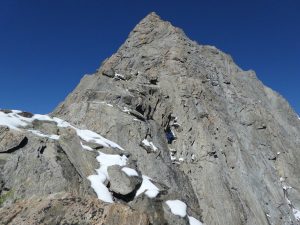 The rock quality immediately improved as the route turned to climb along rather than across its layers. It was fun climbing, a bit slabby but with plenty of positive edges, staying right along the sometimes-exposed ridge crest. Though there were patches of fresh snow, the rock was mostly dry, so I just shook my head when I saw fresh crampon tracks. Putting crampons on at the first sign of snow seems to be common practice here, possibly a holdover from decades past, when the peaks were colder and snowier. 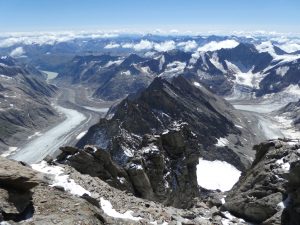 One part of the ridge gave me some trouble, a pinnacle with an overhanging back side that I sketchily bypassed on the snowy and icy right-hand side on the way up. On the descent, I found some hidden footholds allowing me to stay on the crest. It was calm and sunny, just warm enough to climb in a t-shirt without gloves. I reached the summit 7h20 from the car, and spent about 20 minutes taking in the view and perusing the register, where I noted several parties traversing to or from the Schreckhorn. That ridge looked even more fearsome with a smattering of fresh snow, as did the Schreckhorn’s southwest face, falling 1500m to the Unteres Eismeer. To the south, the Finsteraarhorn’s huge north face rose from behind a lesser ridge. Back east, I could see the Finsteraar and Unteraar Glaciers’ junction, and the upper end of the Grimselsee. 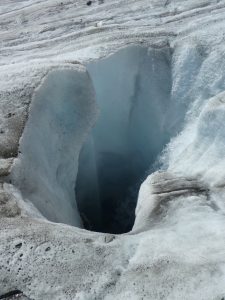 I found the correct path down the face, with occasional cairns, bits of trail, and many crampon marks, so the descent was more pleasant than the climb. I took out my ice axe for all of two minutes to boot-ski a small snowfield, then got some water at the melt-stream below it. Thanks to fresh snow and clear skies, the glacier was flowing with many small streams, which flowed along the surface and merged until they disappeared into moulins. 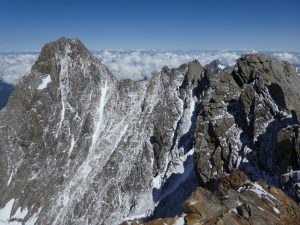 I met a group of three on the Finsteraar Glacier, headed up to sleep at the hut before climbing the next day. Their English was only a bit better than my German, so it was hard to communicate. They probably asked where I was coming from; I pointed and said “Lauteraarhorn” (“louder-ARE-horn”), and received blank stares in response. Eventually one of them said something like “looter-AIR-horn,” and I cringed in embarrassment, as German vowels remain a mystery to me. I managed to communicate that I had come from the Grimsel Hospiz that morning, which surprised them a bit, but what really had them shaking their heads was the fact that I was in running shoes, with no mountain boots. If they would only try it themselves, they would see how much better their lives could be. My feet were trashed enough as-is, and I can only imagine how much worse they would have felt hiking out in the full-shank Nepals the group’s leader was wearing.

The view of the hut perched far above the glacier, connected by the line of ladders, was jaw-dropping. Rather than make that detour again, I continued down the glacier. There were cairns here and there, but they did not indicate a trail, so I just made my way down miserable moraine to the glacier’s toe, then passed a poor stranded iceberg before rejoining the trail. My feet were feeling wrecked at this point, but I tried to make some speed for once, jogging some of the flat and downhill sections of the trail around the reservoir. The cascade feeding the lake was raging in the late afternoon, making for good photos for the day-hikers. I passed a woman leading an unhappy-looking greyhound up the metal grated stairs from the dam, reaching the car about 12h40 after starting. The forecast was perfect for the next day, and I should have done something, but my feet were feeling too thrashed, and my shoes were worn smooth and developing holes. Unfortunately, a maintenance day was required.