Welcome to another edition of “hikes with spikes,” where Dr. Dirtbag shows what can be accomplished by hiking with crampons. Today, we will talk about Monte Cevedale, a glaciated peak near Sulden in the Ortler Alps. Like Ortles, it is very popular on a weekend. Unlike Ortles, it is dog-friendly rather than a friendly dog. Sulden is a nice place to stay, so I wanted to find an excuse to stay there without repeating any ground. Cevedale is normally approached from the other side, but there are a couple of feasible routes from Sulden: one goes over the Paso del Lago Gelado to the Longo/Cevedale glacier, while the other climbs the Solda Glacier to the usual hut. I went up the first, and down the second.

I once again got started just after 5:00, this time hiking the road on the left of the Solda River instead of the trail on the right. This road climbs acceptably steeply to a large refuge and gondola station, both silent as I passed. I followed the signs optimistically pointing to the Casati refuge. They are technically correct (the best kind!), in that the refuge is in that direction, but there is nothing like a trail leading there. There is a cairned path along the Solda Glacier’s left moraine, which fades as such things usually do.

My map showed a route onto the glacier, then back onto rock and up to the Paso del Lago Gelado. Given that it is an old map, and the glaciers are now much diminished, I thought I would be smart and keep on the rock to its left, avoiding awkward transitions on and off the ice. This turned out to be a terrible idea, as the ridge was a steep garbage-fest, while there appears to still be a path along the old route. It was slow going, but I made it work, eventually reaching the pass to find the remains of a hut destroyed in 1918 (bombs?), a memorial to that hut, and a banner celebrating the 120th anniversary of its construction. There was also a register, which I duly signed.

From the hut’s remains, I picked up a decent boot-pack up toward the Casati refuge, which for some reason has its own mini-refuge 100 yards uphill. The track started out across bare ice, then started playing with crevasses in ways that made no sense, with a couple of leg-sized holes in the snow. Not wanting to be a part of that, I took off on a shortcut across bare ice toward the lines of people making their way towards Cevedale. I skipped the hut, following a different boot-pack for awhile before making my way up to the one leading to the summit.

With maybe 100 people leaving from the same hut to climb the same peak that day, you would think that the boot-pack would be clear and safe. You would be wrong. The crevasses were usually obvious: white-brown patches of snow among the blue-gray ice, making for easy if circuitous route-finding. However crampon tracks don’t last on ice, so there were a variety of paths and more leg-shaped holes. Since only had one life in this platform-jumping game, I took my time here, patching together bare ice and solid boot-packs, trying to scope out snow bridges from the side, and making a few leaps.

Approaching the long ridge between Cevedale’s two summit, the trails converged, and I gradually caught a group of three with… a dog?! Yes, the three men were roped together with a happy and impatient mid-sized mutt, who seemed practiced at following boot-packs. I passed this group and several others on the well-beaten pack to the summit, cranking away in just a t-shirt. The summit was the usual incomprehensible foreign language chaos, also featuring a very Italian man in big boots, a harness… and short-shorts and wife beater. It wasn’t that warm, so I put on my layers and sat to the side in the lee of the summit to admire the views. The König-Spitze, Zebu, and Ortler rose rockily to one side, while numerous heavily-glaciated peaks rose to the other. Breaking the routine, I interacted with some of my fellow summiters to share picture-taking duties, watched the bad-ass dog summit, then took off back down the glacier.

I had planned to tag the Suldenspitze and return to Sulden via the pass, but there seemed to be people congregated at the end of the wrong boot-pack I had followed on the way up, so I headed over to investigate. I got a bit lazy, and was chastised by putting a leg through into the void, reminding me to pay more attention. The end of the boot-pack turned out to be another mind-boggling bit of WWI hardware: three large guns on the edge of the glacier. The heroic and clever Austrians (Tyrol is still basically Austria) had stolen them from the Italians, then dragged them up there using teams of 120 men. They had then lobbed 30-40kg shells up to 9.3km at various Italian supply routes. Airplanes and helicopters have made this all obsolete, but no less awesome.

I returned to the Casati hut, then continued on the tourist trail to the Suldenspitze, an unimpressive bump that does not even appear to be the highpoint of its ridge, but which has a cross. I was about to head back to the Cevedale Glacier when I saw a couple and their young daughter topping out on the Solda Glacier, implying that there was a fresh boot-pack on a moderate route. This looked much faster than going around to the pass, so I blew by them as they were unroping, setting a bad example for their daughter by jumping and sliding down the glacier unroped with no crampons.

I found extensive bare ice lower down, and put on the spikes, winding my way down through a mild crevasse-maze and some streams, aiming for a cluster of people roping up on the talus. I wrung out my socks next to them, then hiked back to the tram and down the road. It had been just over an 8-hour hike, a fun and reasonable day out in the hills. 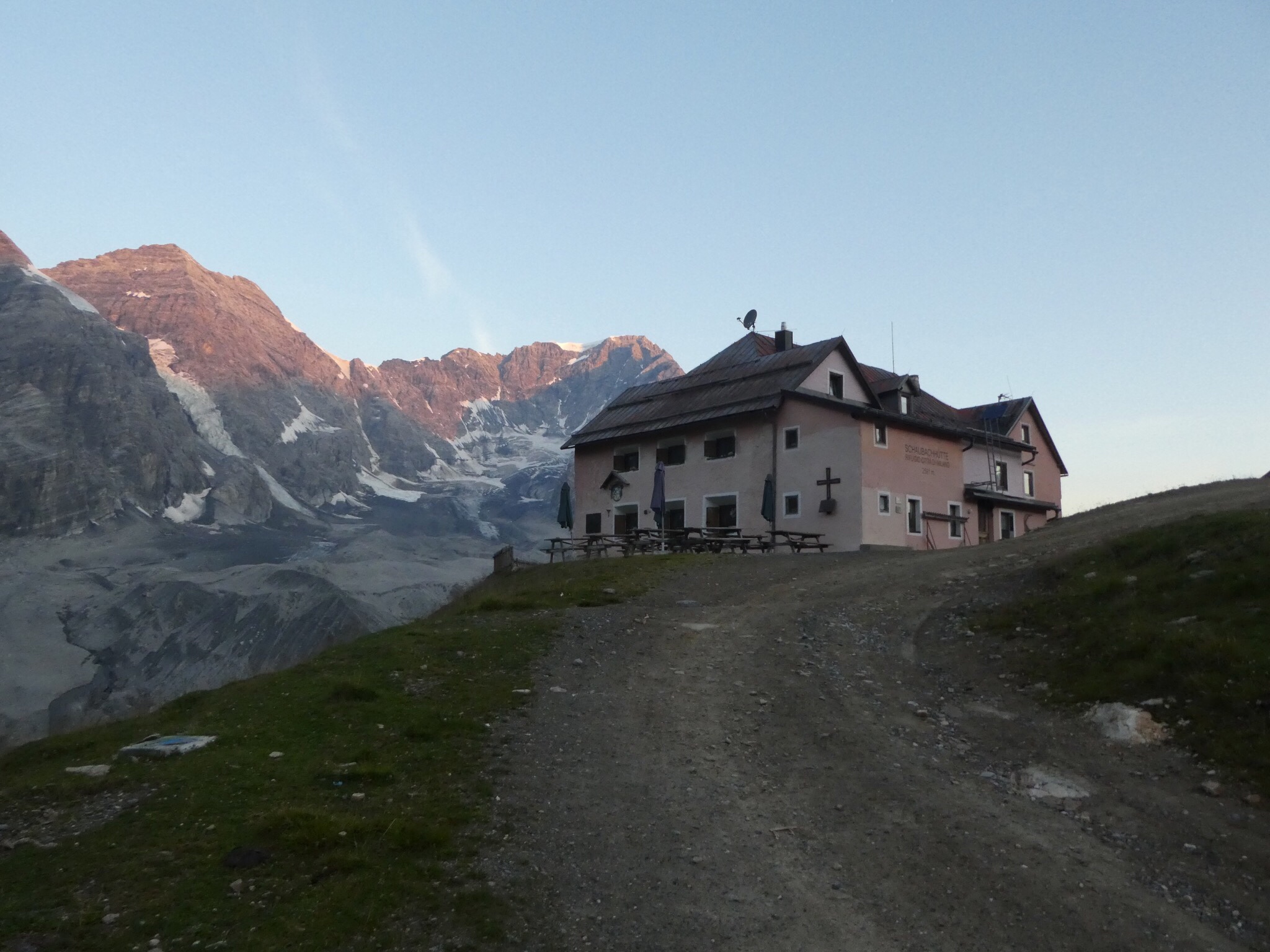 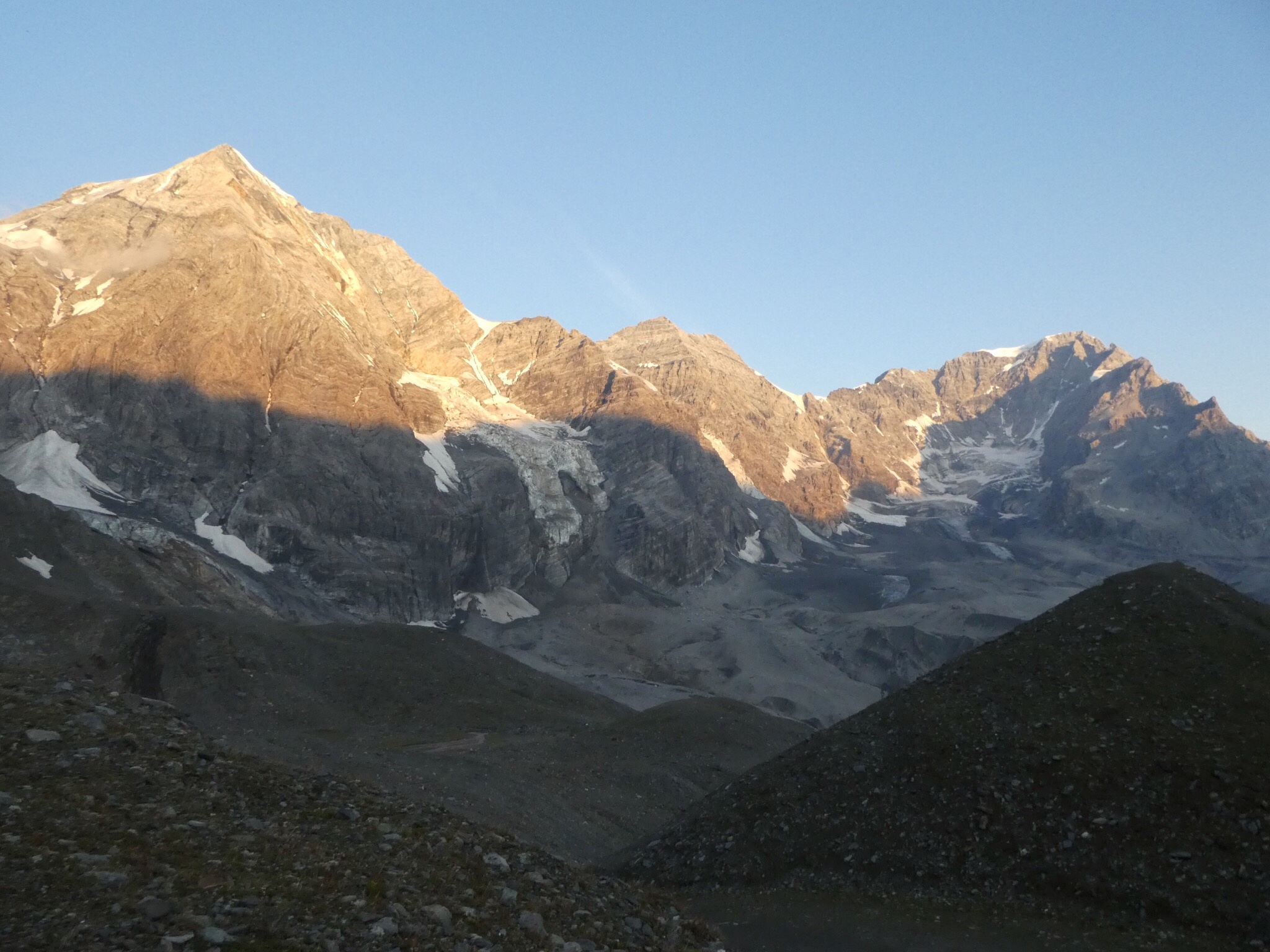 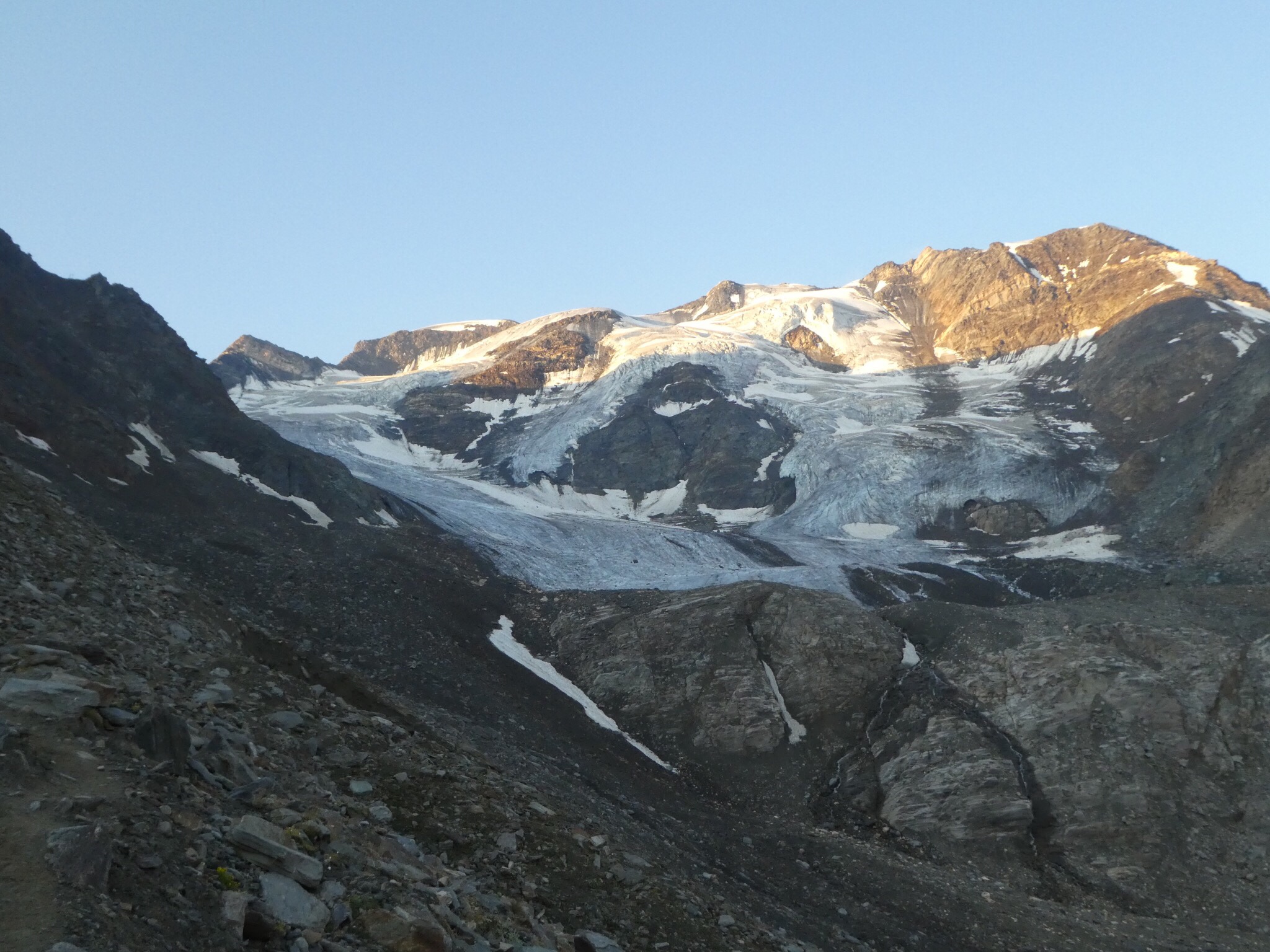 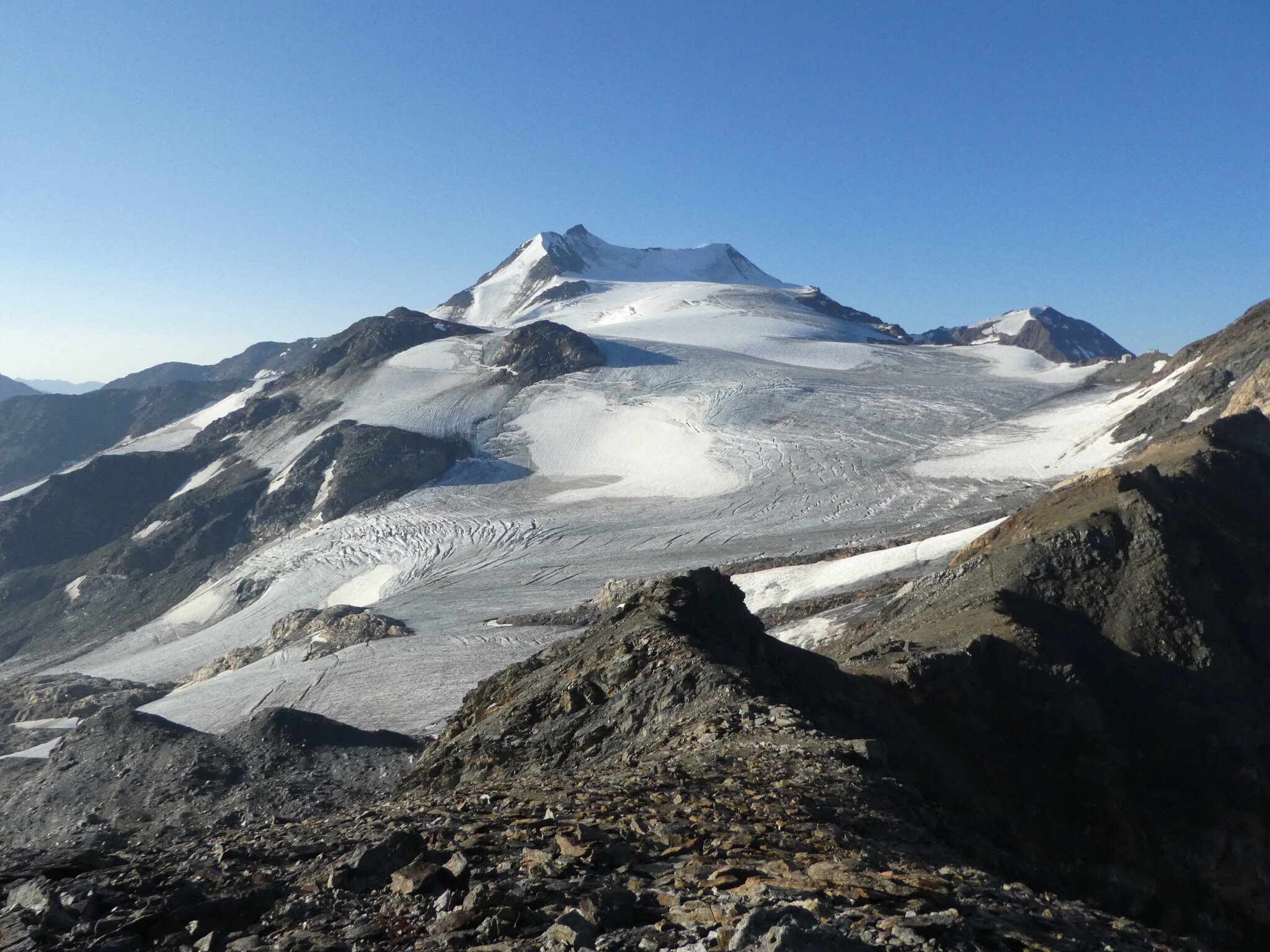 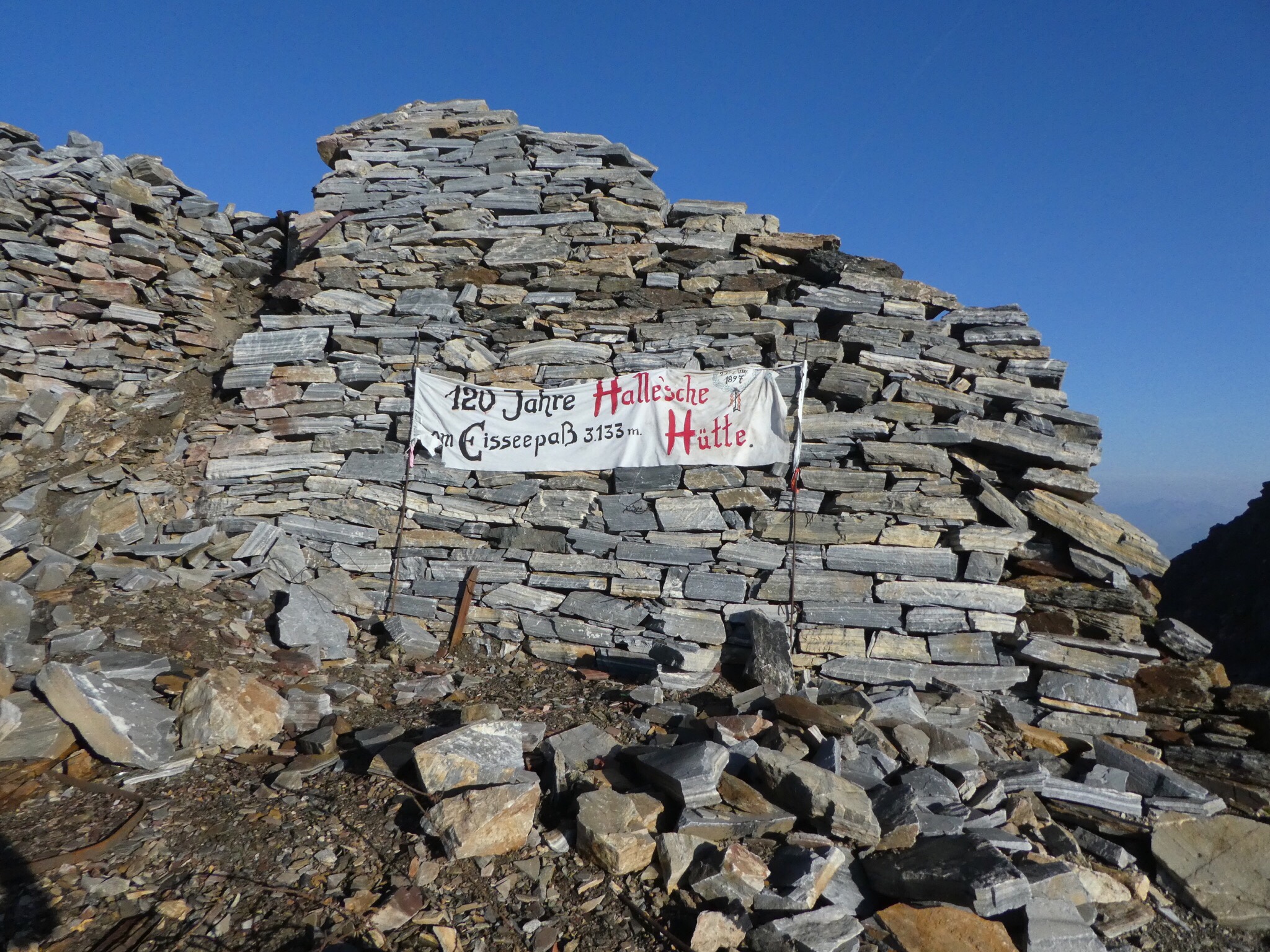 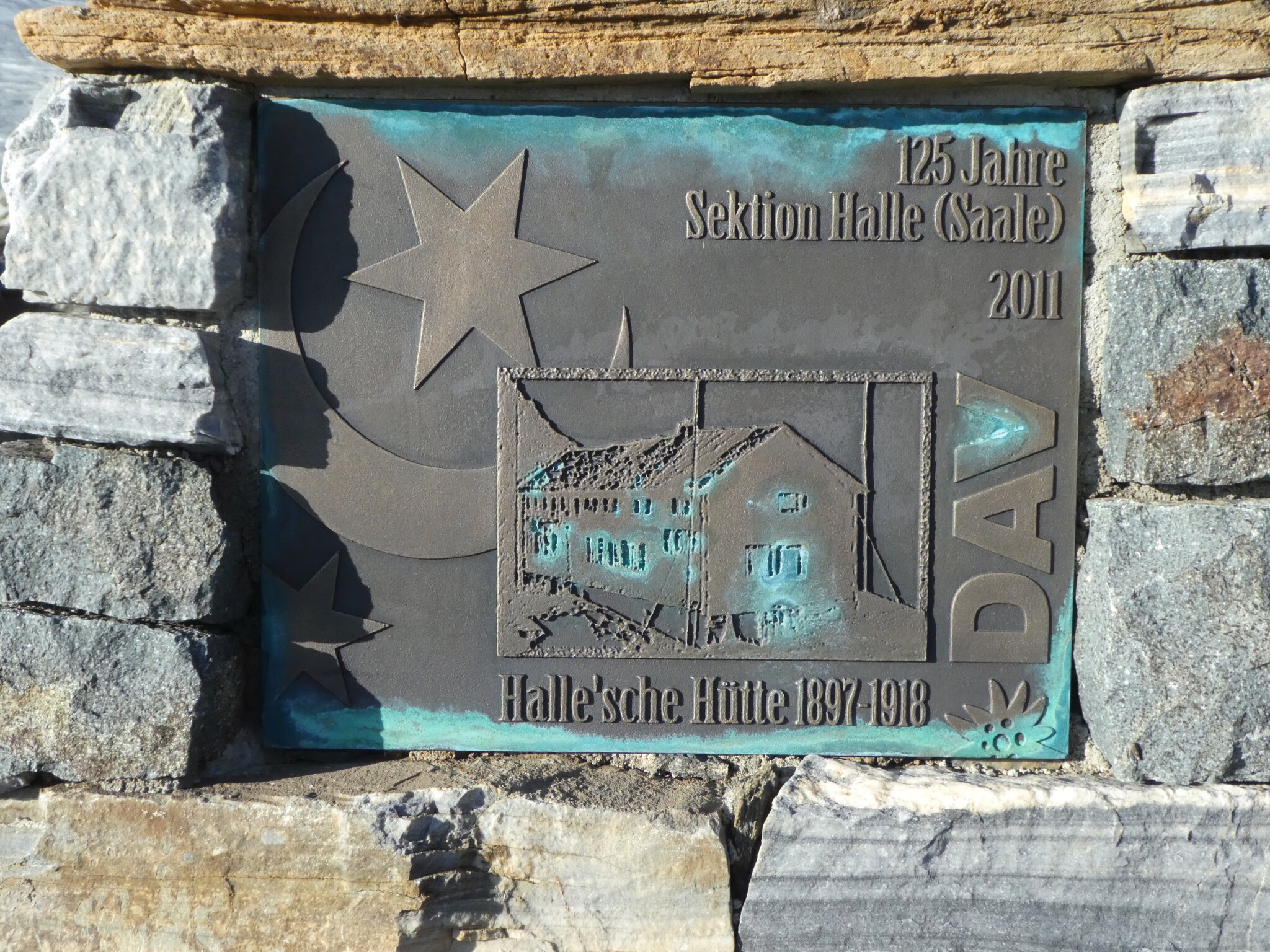 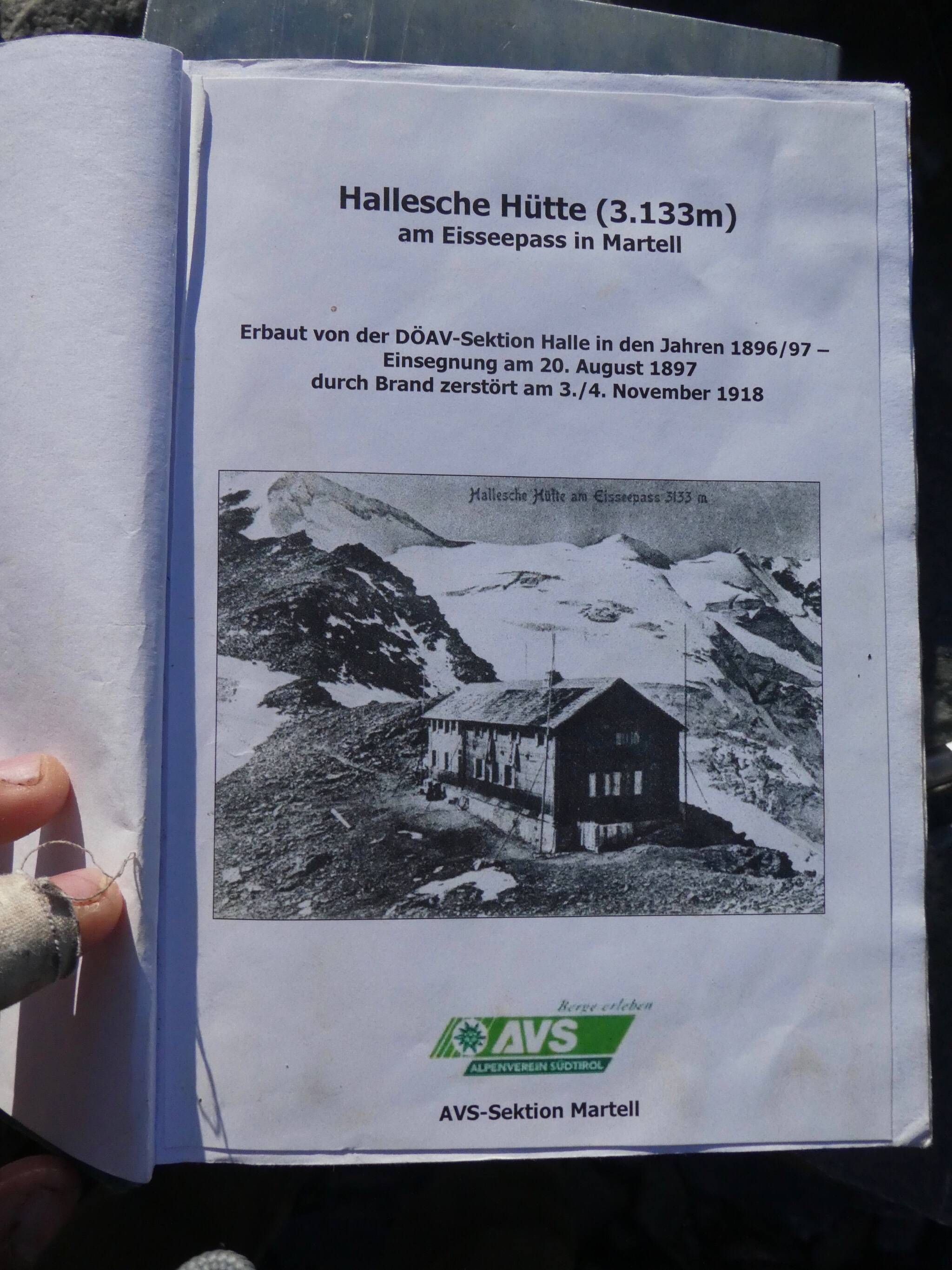 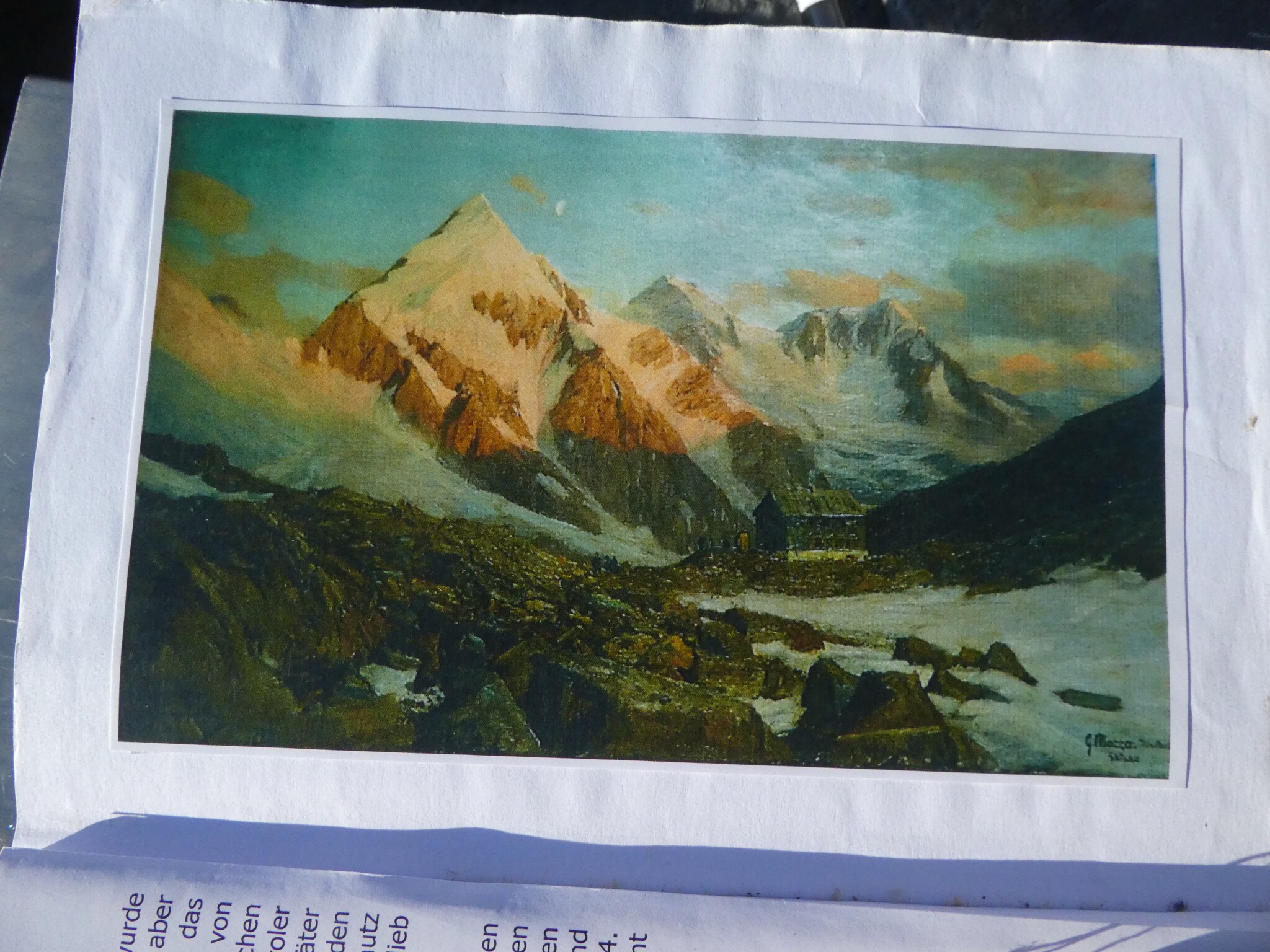 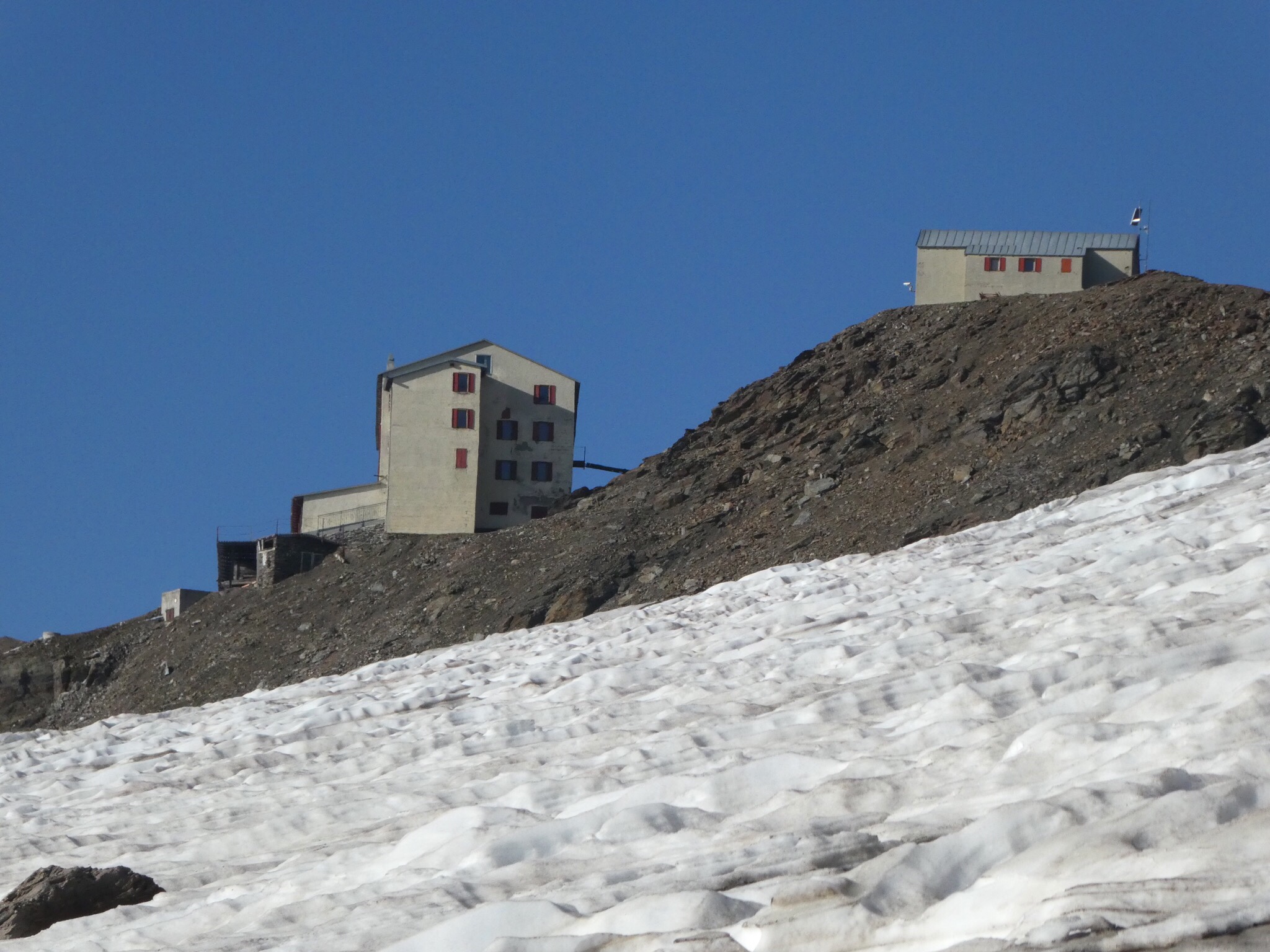 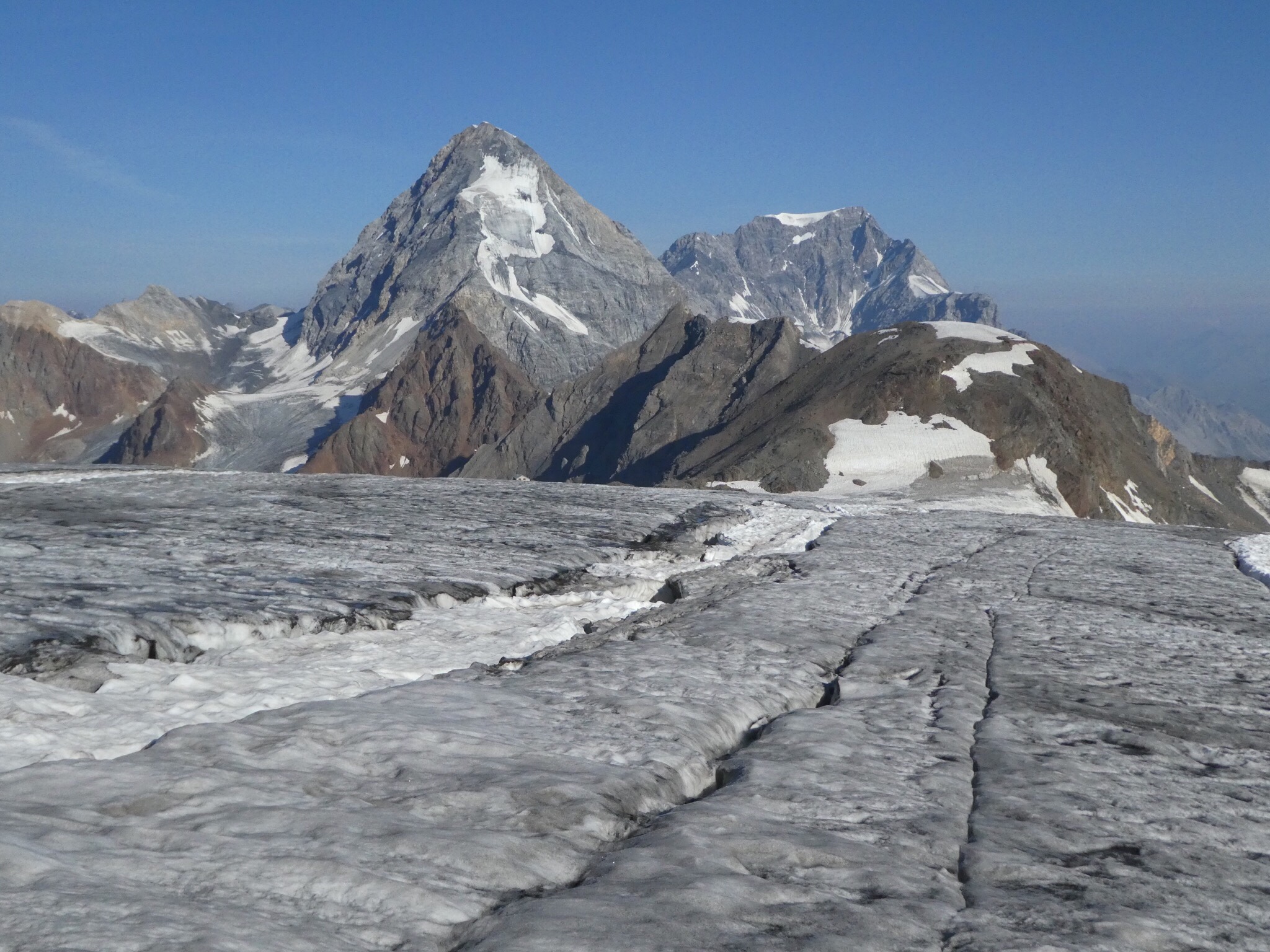 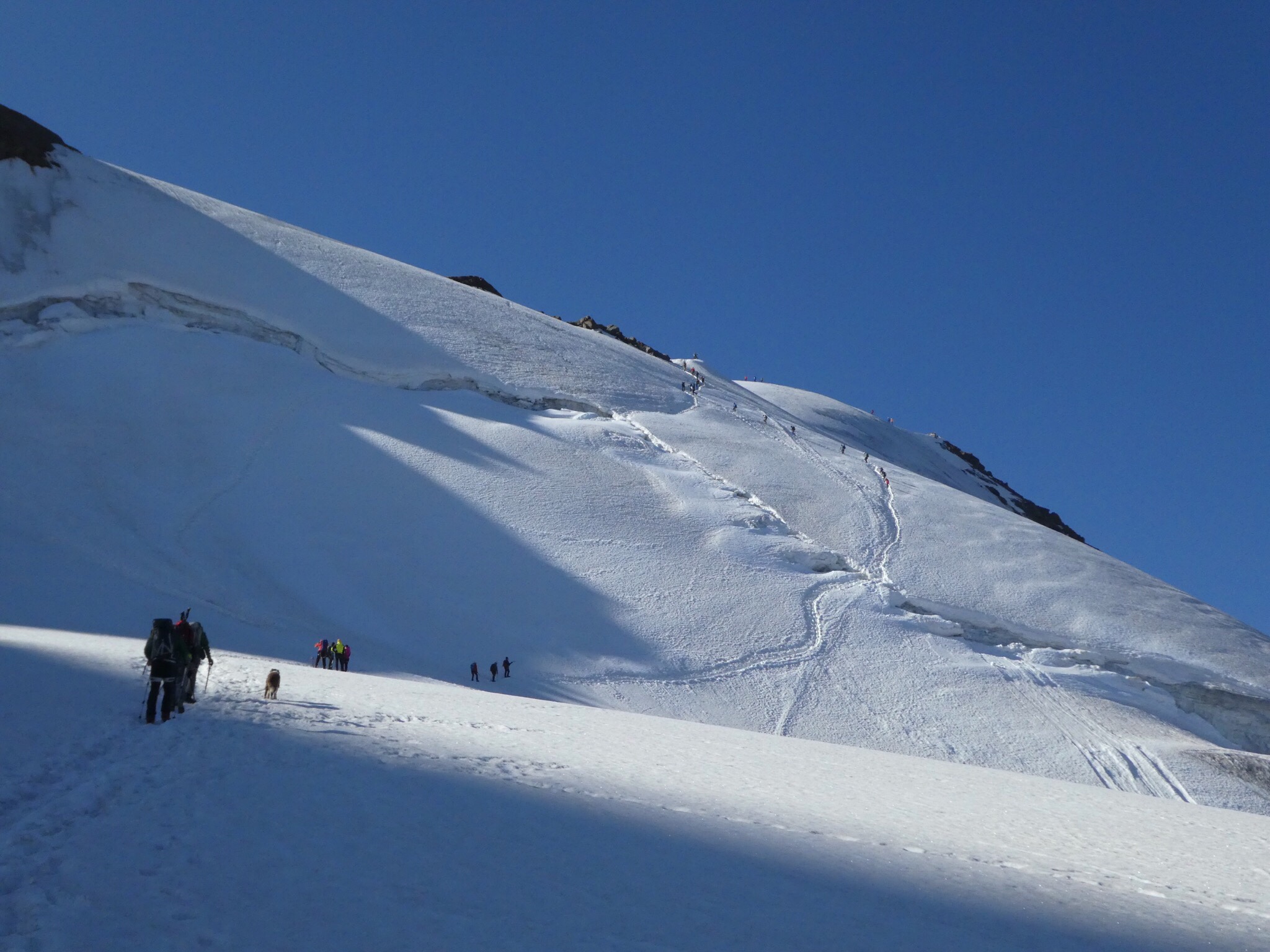 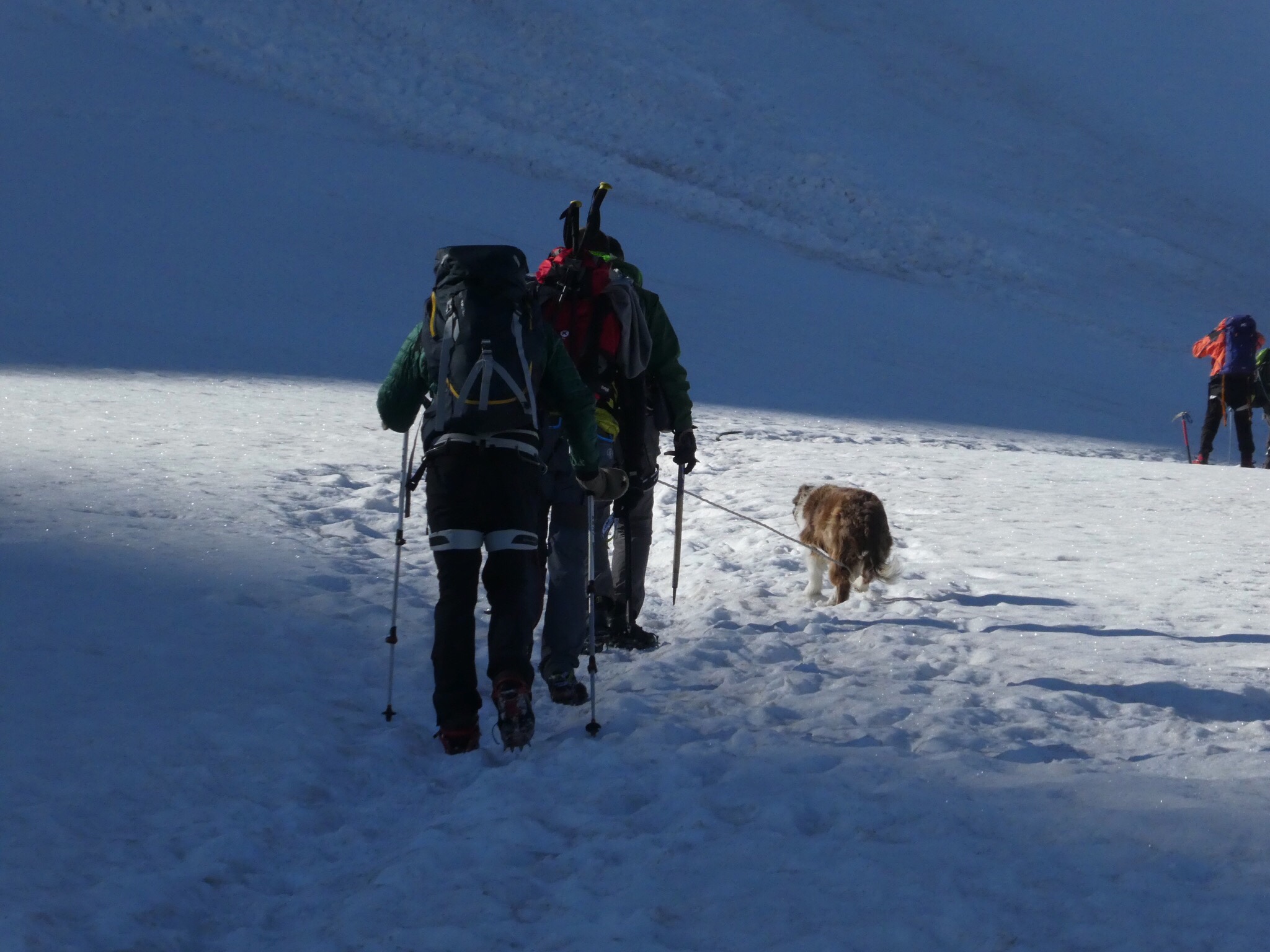 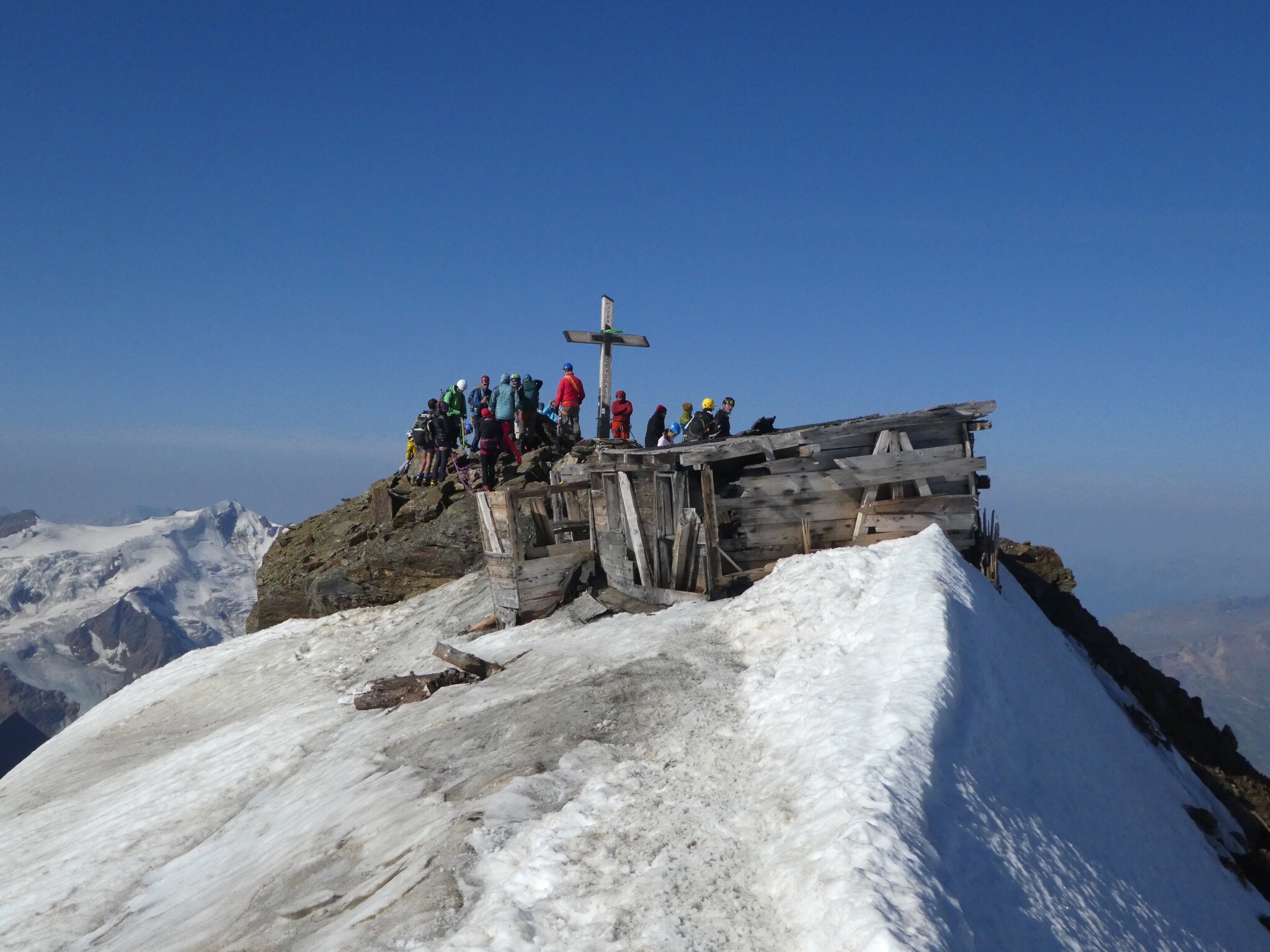 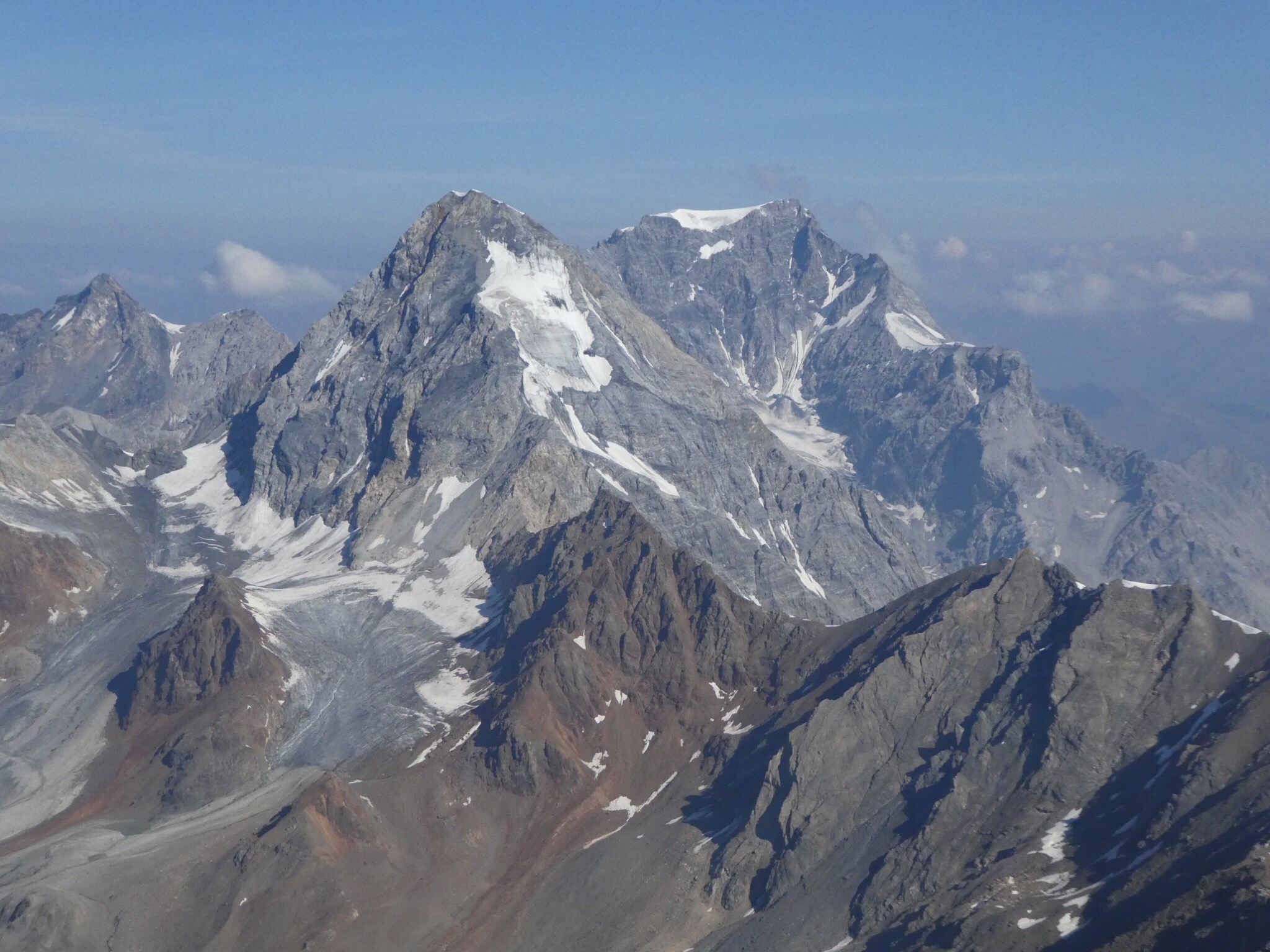 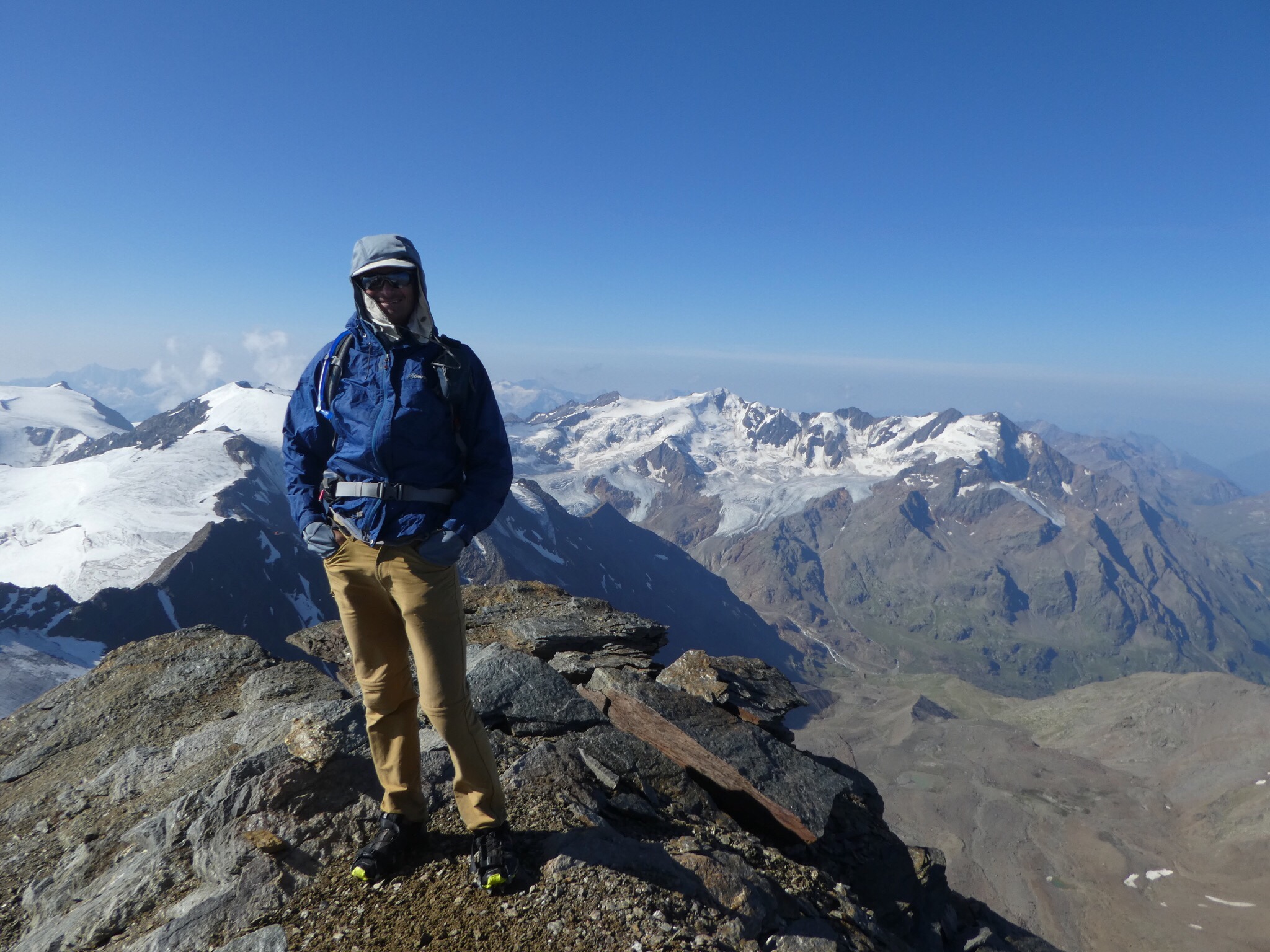 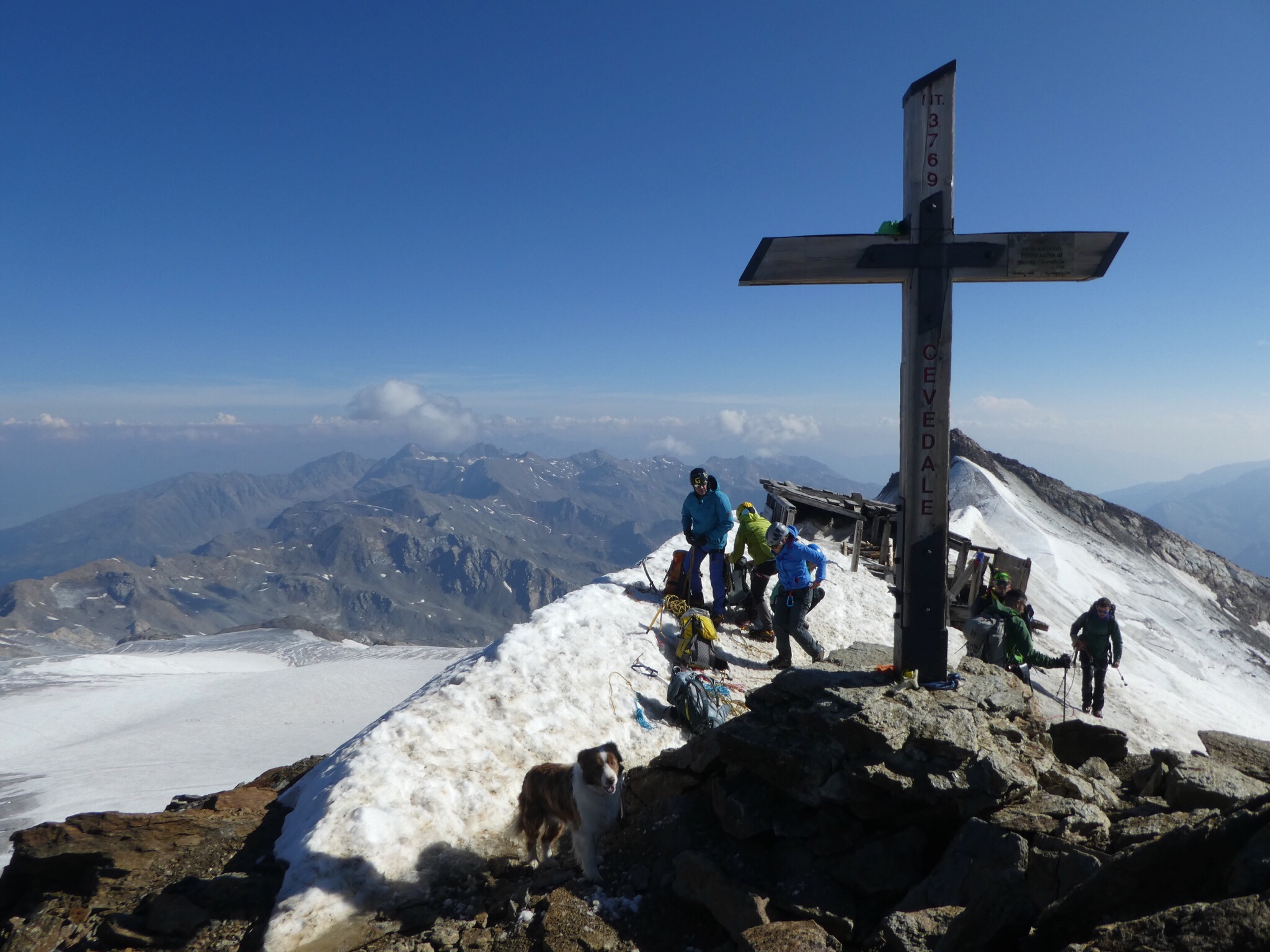 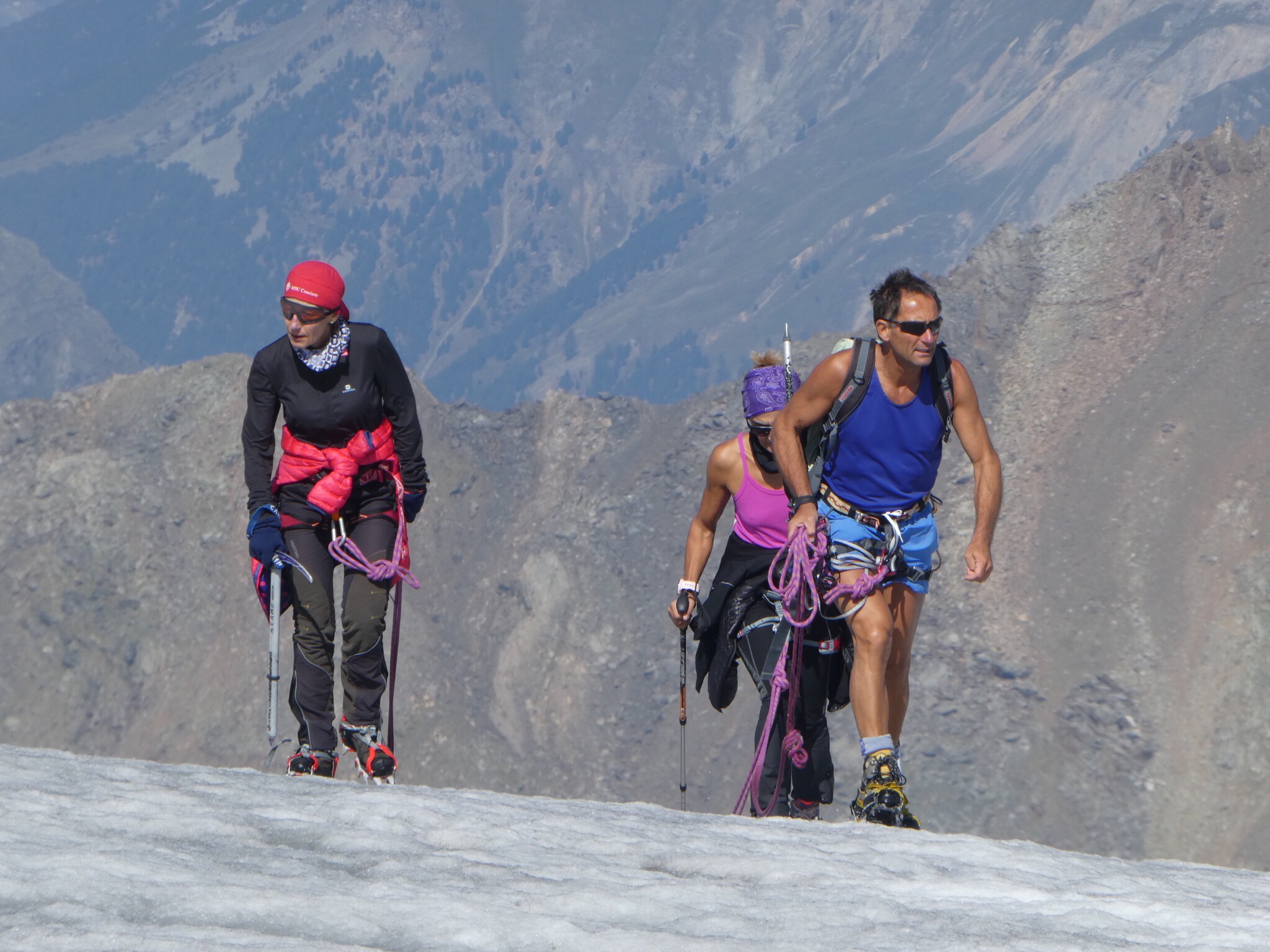 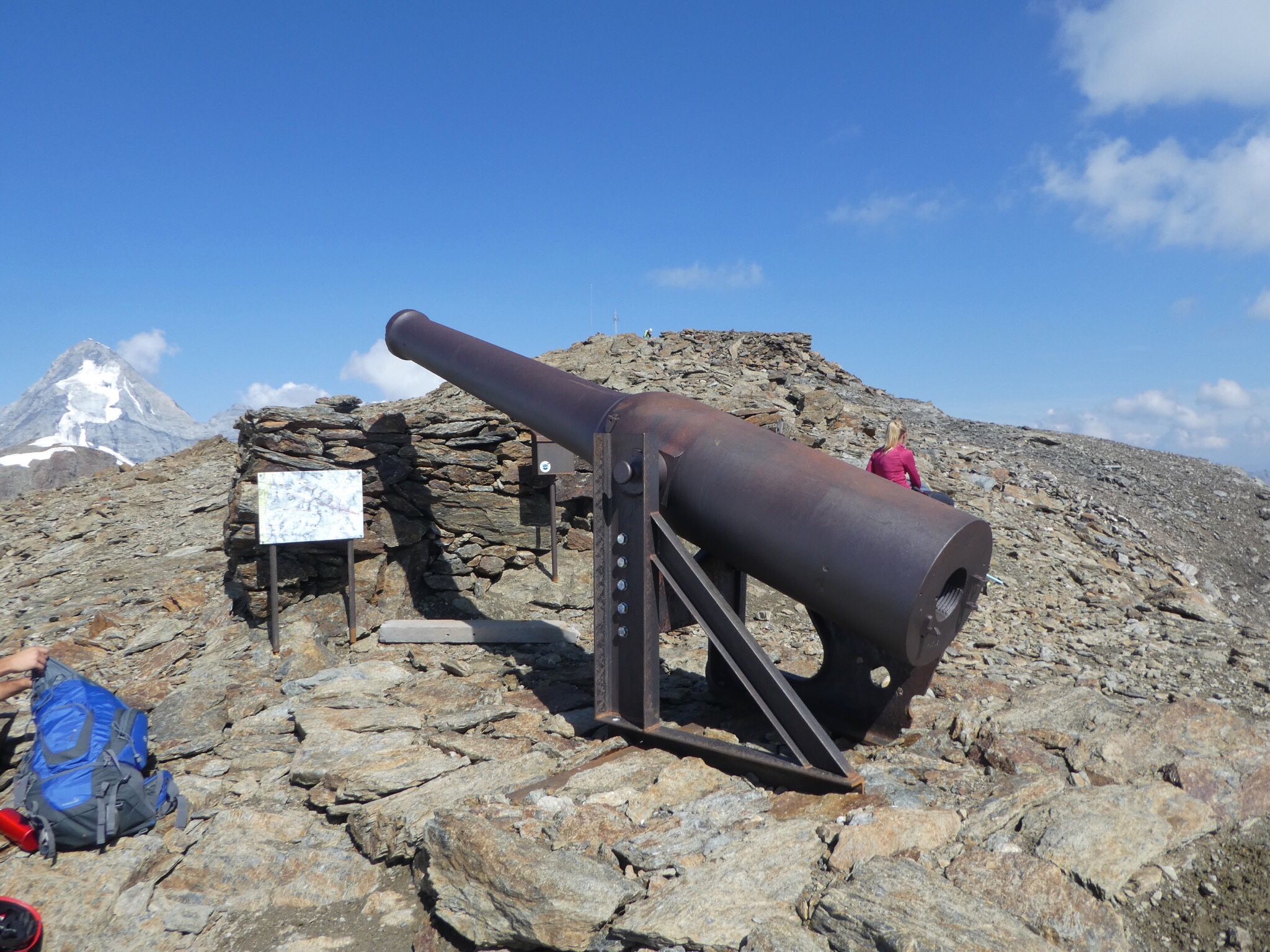 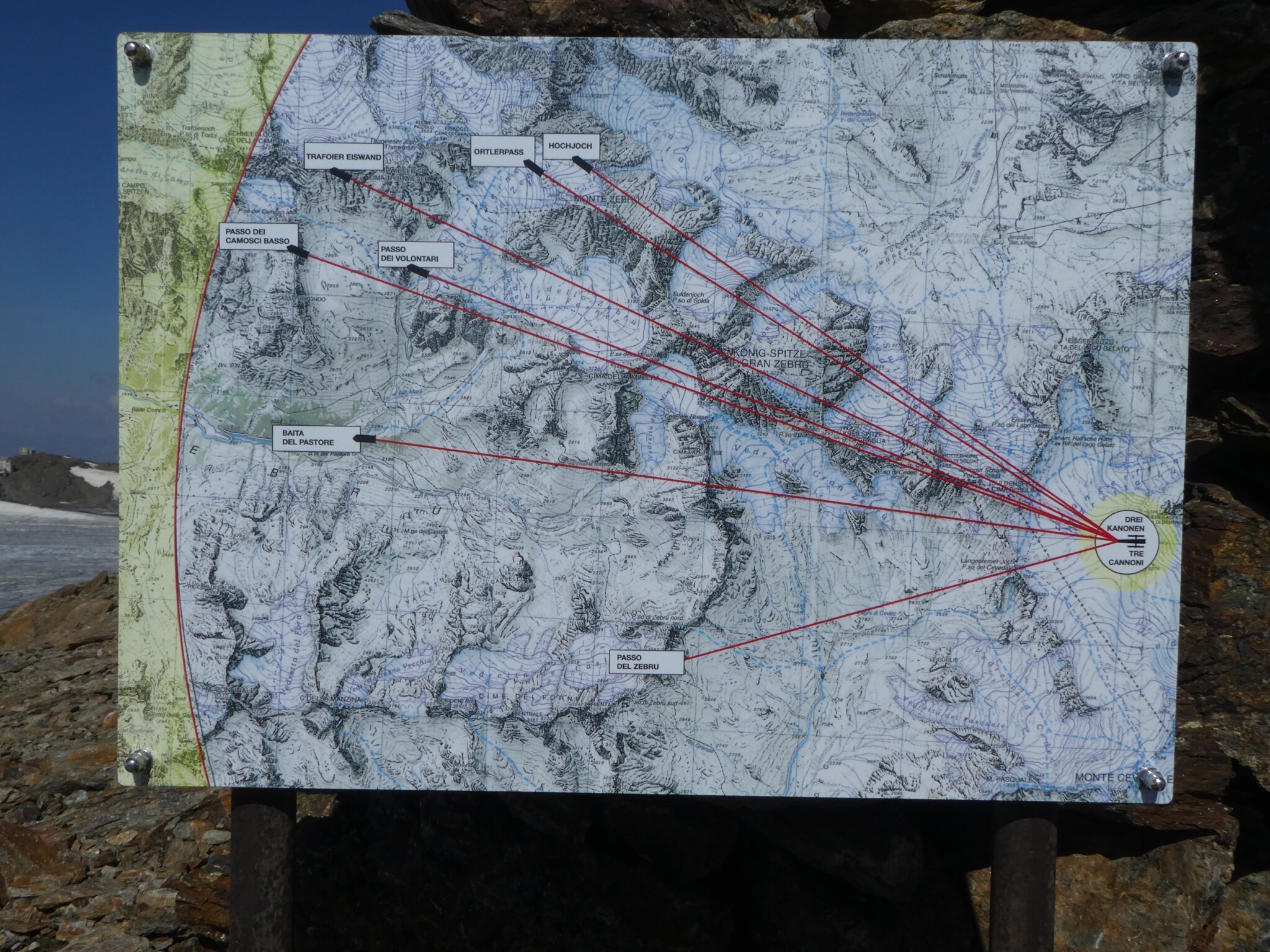 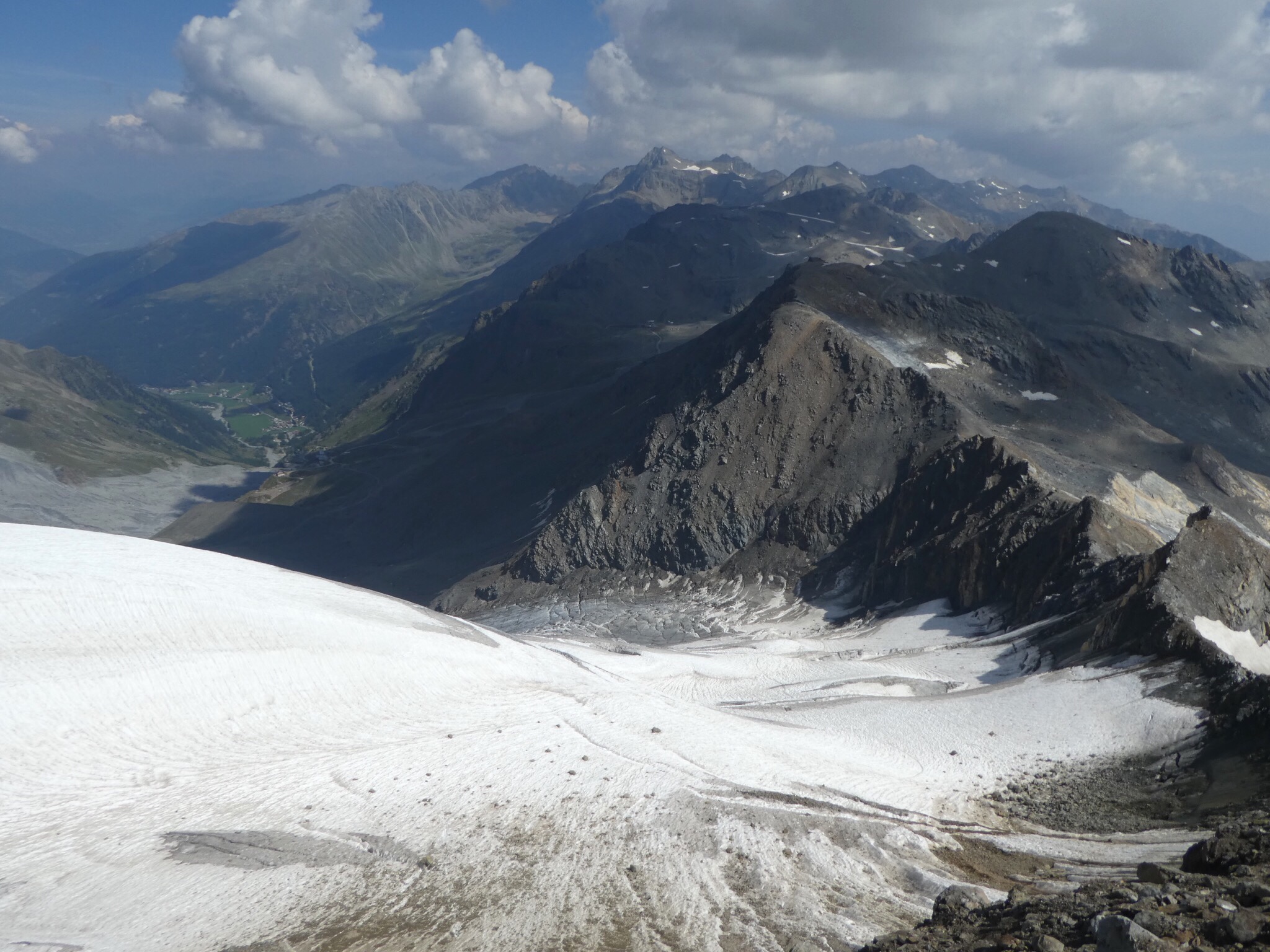