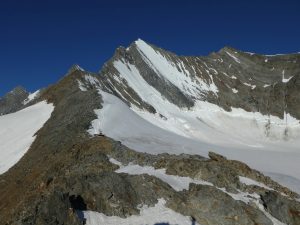 The Nadelhorn is the highest of a line of peaks extending north of the Dom, ending in one of several Breithorns. It is most easily climbed from Saas-Fee, in the next valley east from Zermatt, where a trail leads to the Mischabel Hut, and an easy glacier walk leads to just below the summit. The Lenzspitze is a satellite peak south of the Nadelhorn, connected by a narrow rock ridge. The loop up Lenzspitze’s northeast ridge, across to Nadelhorn, and down the standard route, turned out to be a surprisingly fun day of scrambling, probably the best I have had so far in the Alps. The rock is mostly good, and the layers are angled so that most of the climbing is on positive holds, including some steep sections much easier than they appear. 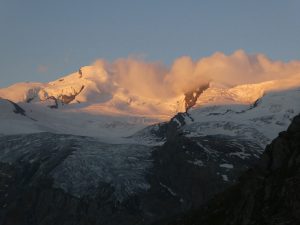 I was tired, but managed to scrape myself out of the car by 4:45, and not to get lost on my way through the now-quiet tourist town of Saas Fee, eventually picking up the line of trail signs directing me to the Mischabel Hut. The trail switchbacks efficiently up the lower slope, then continues straight up a rock rib to the hut, with the help of many metal steps and hand-lines, and a metal ladder. Most of it looks unnecessary, as the surrounding rock is probably class 3, but I suppose the hardware makes it possible for guides to reach the hut without short-roping. On the way up, I watched the sun rise on the Alphubel and Allalinhorn, including the small year-round glacier ski area on the latter. 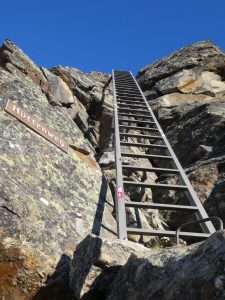 I passed two guys dressed as trail runners talking on the hut deck, and they followed me as I continued up and slightly left, following the rock ridge toward the Lenzspitze. The ridge started out as talus, gradually narrowing, steepening, and turning more solid above a bump with some random hardware on it. I pushed myself to stay ahead of the trail runners, unsure how far they planned to go. They seemed to continue past the bump, though I did not see them higher on the ridge. 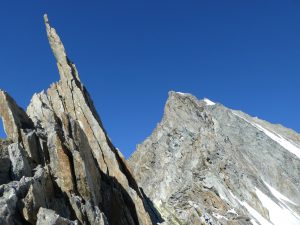 The bedding of the rock on both the Lenzspitze and Nadelhorn slants up to the south, so when climbing the east-northeast ridge of the Lenzspitze, the best route stays close to the crest, with good positive holds. The left side is usually too steep to be useful, while the right is usually chossy and slabby. There are three steeper steps in the ridge, which look intimidating, but are easier than they appear, with positive holds all over. It was the best rock scrambling I have done since arriving in Europe, and I had a great time romping up moderate rock with good position, and great views of the Alphubel, Täschhorn, and Dom to the south. 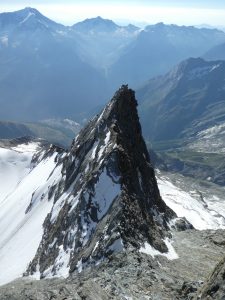 I passed a roped group at the base of the short snow arete just below the summit, and pulled out my axe before carefully making my way up the boot-pack without crampons. I shared the small, rocky summit with a quiet French couple, eating half my cheese sandwich and watching people going up and down the standard route on the Dom’s northwest face. There were two parties already partway to the Nadelhorn, whom I would overtake on the way. The couple and I left at the same time, but they were descending to the west somehow; they had rock and ice gear with them, so I should have asked how they climbed the peak. 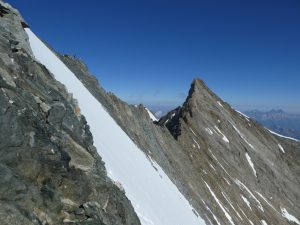 The traverse went quickly, once again staying on the crest on positive holds. There were a few towers, the back sides of which were slabby in this direction, that were probably the crux, some of which had big anchor bolts on top. I passed one party near the start, and the other toward the end, moving as quickly as I could given my fatigue from the previous day. I reached the Nadelhorn’s summit cross panting, but energized after having spent the morning on good rock for a change. 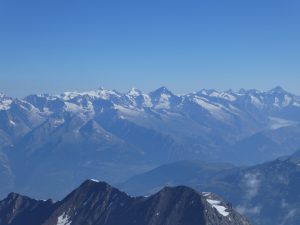 I probably should have continued to tag the rest of the ridge through the Durrenhorn, but I was tired and out of food at the Nadelhorn. Instead, I followed the well-trod boot-pack of the standard route, rejoining the rock ridge just above the hut. I wrung my socks out on the deck, then skipped down the ridge, happy not to be in boots, passing a couple dozen climbers on the way to the hut, and day-hikers lower down.

Saas Fee was fully terrible when I returned, hot and swarming with tourists. Having gone through town in the dark, I got lost for a little while trying to find the car park — embarrassing! I changed at the car, then grabbed my laptop and headed back into town in search of WiFi and power. The tourist information center had both, but was closed for lunch when I arrived. I sat outside for awhile, listening to (I think) some British Orthodox Jews talking in a mixture of English and Yiddish. This was not the first time I had seen them: while I saw none in the Matter valley, I saw several Orthodox men and families in the Saas valley. Maybe there is a small community in one of the towns.

Down ridge to Saas valley

Northwest side of Dom