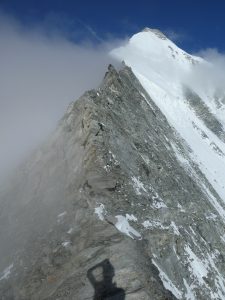 While there are a few inspired names for Alpine peaks, like the Ailefroide (“Coldwing”), most are sadly uncreative. In French-speaking areas, you see various “Dents” and “Aiguilles” (“teeth” and “needles”); in German-speaking ones, all you get are “Horns” (“horns”). I went from climbing the White Tooth yesterday, to climbing the White Horn today; while they are only a few miles apart, they are separated by a linguistic divide between the provinces of Valais and Visp. I had lately gotten spoiled by high trailheads, so it was rough going back to 3000m+ days climbing the high 4000m peaks from the relatively low Mattertal. 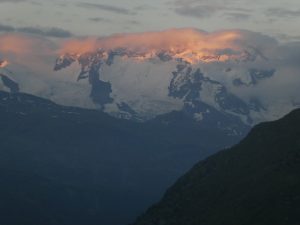 Unlike seemingly most of rural Europe, the Mattertal is extremely dirtbag-hostile, but thanks to a tip from Ted, I knew how to find some free parking, conveniently located near a trailhead for the Weisshorn. I set my alarm for a punishing 4:00, then tried to get some sleep. I was off by headlamp by 4:30, wasting only a few minutes finding the trail to the Weisshorn hut. The valley’s trails are clear and well-signed, but since “trailhead parking” is not a thing, it is not always clear where to begin. 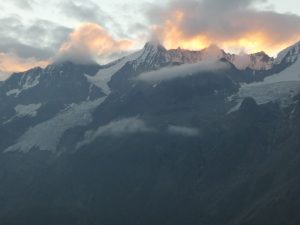 From there, I ground out 1500 meters of climb on an efficiently steep trail, following the nice signs that give time estimates, but never distances. This was also true in Chamonix, so in each place I try to come up with an appropriate scaling factor. In this case, the “4 hour” climb to the hut took about 2.5 hours. It was once again non-threateningly cloudy in the morning, so even after I put away the headlamp, the scenery was only so-so. The exception was some great alpenglow on the Dom and Monte Rosa, caused by light reflected off surrounding clouds. 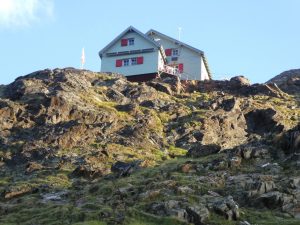 Not wanting another Swiss scolding like the one I got the previous day for taking water from a campground without asking, I motored right by the hut, continuing on a trail and then a clear but lightly-used boot-pack. the pack led straight to a right-trending choss-ledge cutting through a cliff band, with some wet slabs at its base. Not liking the look of it, I wasted a few minutes trying to climb the drier rock to its right, then made a few delicate moves across the slabs, which were stickier than they looked. 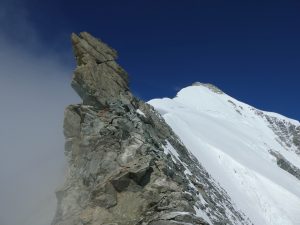 Fainter now, the cairned trail continued toward the Weisshorn’s east ridge. Fortunately, if you take the right path, most of the terrain up to about 3850m is no harder than class 2, making the first 2400m pass more quickly than I expected. Beyond there, the ridge narrows and flattens, and the climbing becomes fun class 3-4 on solid rock. This is a good, clean ridge, with the best route usually along the crest, even going over the gendarmes. 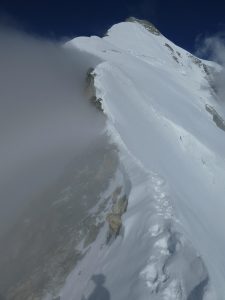 I was finally emerging from the clouds, and could see a party of two ahead of me ascending the upper snow ridge, which accounts for much of the final 500m of elevation gain. I also saw several parties on the summit ridge of the Bishorn, just to the north. The snow was already starting to decay as I climbed the ridge, turning to breakable crust over calf-deep slush, so it was slow going grinding out the final climb. I probably should have started a bit earlier, since I knew I would be finishing on east-facing snow. 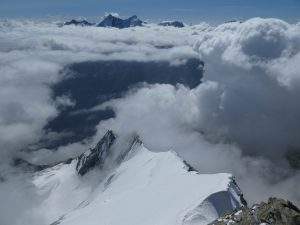 I met the party ahead of me as they were roping down the summit rocks, the probable guide lowering his client down class 4 terrain while wearing crampons. I climbed onto the rocks in my own spikes, then stashed them at the first flat place to scramble another few minutes to the summit cross, this one bearing a disturbingly misshapen Jesus. 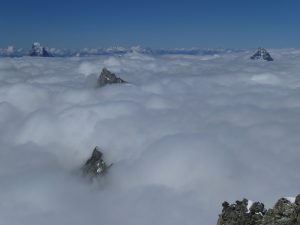 I took the time to eat my cheese sandwich and admire the tops of some 4000m peaks, similar to the day before, but was concerned enough about the deteriorating snow not to linger too long. The pair ahead of me had put in some steps while postholing their way down, but they were already unreliable and collapsing, so I had to be extra-careful, sometimes downclimbing facing in. I had expected to catch them on the snow, but Euros seem shockingly good at going down snow, facing out on slopes where I would face in, so I did not catch them until ten minutes onto the rock ridge, where their boots and short-roping were no match for me in trail runners. 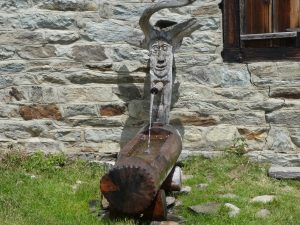 I re-entered the clouds on the narrow part of the ridge, but fortunately there were enough bits of trail and cairns to follow as it widened, sparing me having to look at my map until I got below the clouds and could orient myself by landmarks below. I stopped outside the hut to wring out my socks, but saw neither other climbers nor the guardian. I did, however, meet a dozen or so climbers hiking up the trail below, aiming to summit on what turned out to be a bluebird day. The forecasts I have looked at here — ECMWF, Meteoblue, and whatever the tourist information people use — have been surprisingly bad. It is supposed to be partly cloudy now, but I can see only 2-3 small wisps of cloud from Zermatt. The round trip took about 9h40, surprisingly little time for 3100m of elevation gain. This gave me time to walk into Tasch for perishables and internet, and probably to turn around and do something else the next day, but I decided to take a tourist day instead.