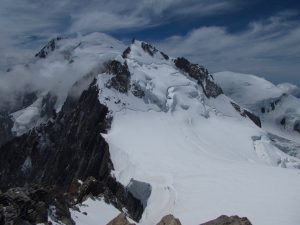 The standard route up Mont Blanc, the Gouter Ridge, starts somewhere west of Chamonix, reached by some combination of trams and cog-rails. That did not appeal to me for a couple of reasons (logistics and being out-and-back), so I looked instead for a direct route from Chamonix that would enable a possible loop. I remembered that Killian Jornet had done Mont Blanc in a ridiculous time starting at the town church, and it seems like the route he used was the Grands Mulets, which climbs to the tram station at the Plan de l’Aiguille, then up the Bossons Glacier to join the standard route at the Col du Gouter. Not being Killian Jornet, I started from the dirtbag lot, went much more slowly, and tacked on some extra minor summits. 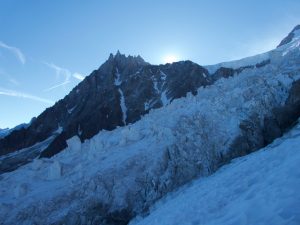 I left the car around 3:30, and wasted only a little time finding the trail to the Plan de l’Aiguille, which starts just behind the dump station in the RV lot near the base of the tram. The trail starts out steep, then flattens out a bit as it switchbacks up past the refuge to the midway tram station and restaurant. Above, there is a marked trail continuing toward the Pèlerins Glacier. However, the glacier has retreated a lot since the trail was installed, and it now deposits one at the edge of a super-sketchy lateral moraine. I wasted some time trying to downclimb it near where the yellow dots end, then found a more stable section a couple hundred yards uphill. In retrospect, I think there is a social trail, possibly leaving below the tram station, that traverses below the glacier’s toe to rejoin the old Grands Mulets route.

Instead, I sketched up some snow and talus on the other side of the glacier, then side-hilled a bit before descending to the old trail, now much fainter. Along the way, I found numerous old pieces of skis, and a nice left and right glove that unfortunately did not match, all collected by avalanches past. I followed the trail to a large, abandoned tram station, then continued on a fainter path, intermittently marked in blue. I passed two holes blasted in the rock, with signs indicating that they were shelter zones from rockfall off the Aiguille du Midi. It seemed unlikely that, after seeing approaching rocks, one would have time to jump into one.

The trail ends at the Bossons Glacier, whose tongue used to extend almost to Chamonix, and is still impressive from town, descending to around 1600 meters. The glacier is large and heavily-crevassed, and I was apprehensive about taking it on solo with lightweight gear. I put on my spikes, took out my axe, and started up the left side. At the Plan du Glacier, I traversed southwest, aiming for the Grands Mulets. The terrain got more complicated, but as it was mostly bare ice, there was little chance of falling in a hole. 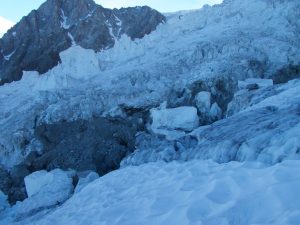 Below the Montets, where the glacier is split by a rock ridge at la Jonction, things got interesting. There is a gash in the glacier, partly filled with debris and large ice cubes. I found a bamboo ski gate on one side, and bits of boot-pack headed toward the gap. There turned out to be a circuitous path down and around some ice cubes, then up the other side to more continuous glacier, where there remained enough surface snow to both hide crevasses and preserve a boot-pack. 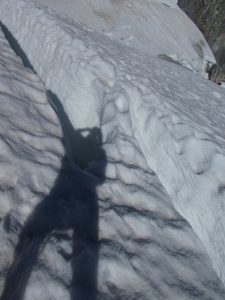 The pack stayed well away from the Montets hut, which supposedly has a guardian, but does not seem to see much use. The boot-pack was useful in threading through the maze of large crevasses. However, it seemed to do a few sketchy things, and someone following it had put a leg through, so I had to pay attention as I made the 1200-meter climb to join the standard route at the Col du Gouter. There are some large seracs on this side of the Dome du Gouter, and plenty of evidence of large chunks of ice falling off, but I did not see any activity, despite spending a good chunk of the morning there on a sunny day. 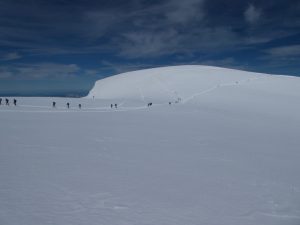 Though I had seen what might have been crampon marks from earlier that day, I saw no other people on the route until joining with the standard Gouter Ridge. There I passed the probable creators of those marks, and joined the hordes headed to and from the summit. It was noticeably colder on the ridge: while I had been sweating in an overshirt and thin gloves before, I soon put on my windbreaker and mitts. My shoes iced up, and my feet were a bit cold, but not cold enough to worry or stop to put on my plastic bags. 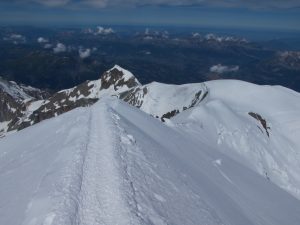 The last 600 vertical meters were a well-churned trail, or well-established steps on the steeper parts. I passed a small crowd at the Refuge Vallot, now an astronomical observatory and emergency refuge, then continued following the boot-pack to the summit. Most of the crowd was what I expected: people with big boots and lots of gear, moving slowly and roped together in groups of 2 to 4-5. However, I saw a lone man 100 yards ahead of me, moving quickly with trekking poles. I tried to catch him, but I was not at my fastest after 3600 meters of climbing, so he stayed out of reach until the summit. He turned out to be one of a pair of Germans (I think), climbing the standard route in proper minimalist gear, light hikers and micro-spikes in his case. Spread the Truth and the Light(weight), brothers! 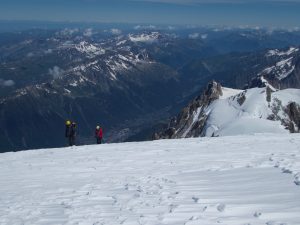 It was sunny and only slightly breezy on the summit, so I took the time to eat half a sandwich, check out the views of lesser peaks and the Courmayeur valley, and watch parties arrive, take selfies, and depart. Having been told that I could buy a downward ticket at the top of the tram, I decided to continue on my loop, continuing over Mont Maudit and Mont Blanc du Tacul, ending up at the touristy Aiguille du Midi. One thing I enjoy about Richard Goedke’s guidebook is his personal asides, and he feels a particular disgust toward the Aiguille infrastructure. He notes that fighter planes have twice clipped the gondola cables (yikes!), and states strongly that all the buildings desecrating the peak should be removed. There does not seem to have been any progress toward this goal in the quarter-century since his first edition. 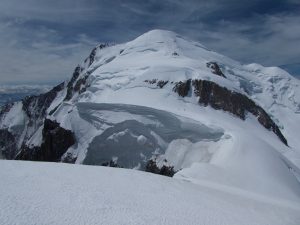 The traverse looked simple from Mont Blanc, but there were several complications on the downclimbs, hidden from above. After following more easy steps down to the Petits Mulets, I found a steep, somewhat icy descent to the Col de la Brenva, where I was forced to downclimb facing in, semi-front-pointing with my running shoe crampons. This was one place where having Real Boots would have made my life easier, but my lightweight setup was sufficient. After a traverse, I easily French-stepped directly up the snow face to Mont Maudit’s small rock summit, admiring the massive serac at the col behind me.

I at the last of my food while admiring the view, then tried to figure out how I should get back to the boot-pack. It would have been easiest to return the way I had come, but Goedke describes following the ridge to the Col du Mont Maudit. This proved annoying and sketchy, a mixture of rock and steep, hard snow. This was the other section where I would have been better off with boots and real crampons, but I made it work by staying next to the rock, where the snow was a bit softer, and I could grasp various handholds with my non-axe hand. 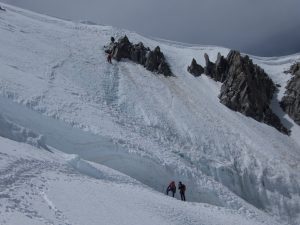 Reaching the Col, I was surprised to find a steep and icy descent. I watched a couple of French climbers start down, for some reason roped together with lots of rope out and no intermediate pro in the classic European suicide pact. I gave them some space, then carefully made my way down the variable-quality steps, pretending to find a use for a hand-line with widely-spaced overhand bights. I caught up to them fiddling with gear on the lower edge of a crevasse, and complimented them on their lightweight choice of footwear (Salomon X-Alps, a bit pricey for me at $250/pair). One replied that I seemed to be traveling a bit lighter… 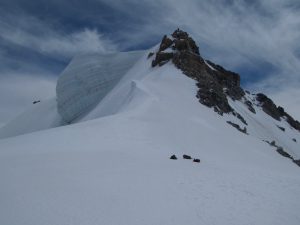 Below the initial headwall, it was mostly easy stairs through the crevasses to the Col Maudit, where I passed a few people lounging in the sun. I continued on the trail to a point due west of Mont Blanc du Tacul, then followed the less-traveled boot-pack a short distance to its summit. There was an impressive piece of ice hanging off the north side, and a bit of third class scrambling on the west leading to the summit, where I passed a roped group of three on their way down. I had a good clear view of Mont Blanc and Mont Maudit from the summit, the latter looking much more serious than it did from above. 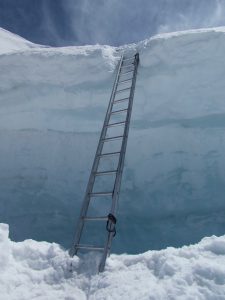 Back on the trail, I found the descent to the Col du Midi both longer and trickier than I had expected. Rather than simply plunge-stepping down a snow slope, I followed a meandering path around some crevasses, and finally descended a ladder bridging one that seemed to cross the whole slope, completely blocking access from the Aiguille. There was a steady stream of climbers on the final path, mostly returning to the Aiguille after their ascents. I was hungry and wrecked, pathetically slow on the final 300-meter climb to the tram station. Fortunately everyone else was tired, too, so I still got to pass some people. I finally reached the ice-tunnel into the station, climbed over an apparently locked gate with an “alpinists only” sign (what, me?!), and sat down among milling tourists to wring out my socks.

It turns out that they do not sell tickets at the upper station, but they will give you a number to board, and apparently sell them at Plan de l’Aiguille. I grabbed a bit of overpriced refreshment in the cafeteria, then made my way through the milling crowd toward the line for the tram. I got into conversation with a friendly family from Belgium, who spoke excellent English, and seemed interested in what I was doing. Being from a country that is mostly at sea level, they were not mountaineers, though the son seemed like he might be interested. The descent from 3800 to 2300 meters was easy and scenic. At the midway station, everyone queued up to switch from the upper to the lower tram. However, to the side I noticed some completely unguarded steps leading outside. I suppose I could have asked whether I would have to pay at the bottom if I rode the tram, but I seized the opportunity, leaving the station and jogging the last 1200 meters down to town. I doubt they have many customers willing to both “hike” up to the Aiguille, and jog the last leg.

Looking back toward Aiguille

Slog to the tram

Most of route from descent