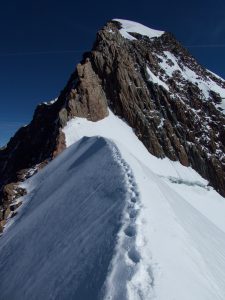 The Aiguille de Bionnassay is to Mont Blanc what Liberty Dome is to Rainier: a little bump on the side with just enough prominence to technically qualify as a separate peak. However, since Mont Blanc is a more rugged peak than Rainier, the Bionnassay is still fairly impressive-looking, with some interesting fourth class climbing on fairly solid rock. Also, since it is not accessible by tram, the 3000-meter elevation gain keeps the crowds away.

I got a half-assed alpine start around 5:00 AM, and briefly got lost in the road maze before picking up the signs directing me to the Chalets de Miage, a small village accessible by foot or capable 4×4. The access road is in good shape, but far too steep for my underpowered rental car, even steep enough not to be annoying on foot. Past the houses, signs directed me to a clear trail leading past a waterfall and up an old moraine left of the Miage Glacier’s outflow stream. 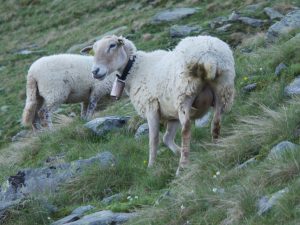 The trail wastes no time in gaining about 1200 meters from the valley to the Plan de Glacier hut. Along the way, I passed a Frenchman making steady progress up the hill, and a couple weirdly camped in a flat spot on the grassy hill. I also passed a herd of sheep, busy mowing the grass and polluting the water. At the hut, the trail traverses some snowfields to pass the rock rib on the left side of the glacier. The Aiguille is on the west side of the mountain, so I was in shade the whole way up, and the snow was rock-hard and slick. I almost put on crampons, but felt comfortable enough hiking the boot-pack with my axe out to guard against a possible slip. 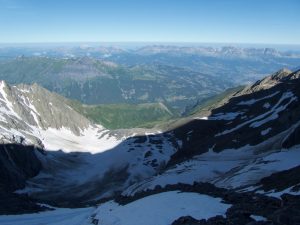 The traverse over the rock rib is marked by several fixed cables and lots of red dots and arrows painted on the rock. I passed a guide and client headed down, and a couple roping up and putting on crampons to cross the friendly, flat part of the glacier. I continued skipping along the traverse, then proceeded more carefully where the boot-pack turned up the snow-slope next to the talus ridge leading to the hut. 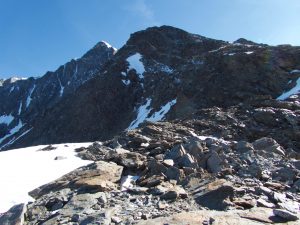 I got on the ridge of garbage-rock as soon as I could, then made a steep, efficient climb toward the hut around 3300m. There were multiple paths, seemingly following multiple lines of red dots, some looser than others. There was also a boot-pack in the snow to one side, which I might have used if I were doing this in boots-and-crampons mode. I finally reached a few more cables just below the ridge, then climbed about 10 feet of snow to pop into the sun, where I was greeted with looks of mild disinterest by a couple French climbers done with their outing by mid-morning. Most of the route to the Aiguille was visible from the small hut. 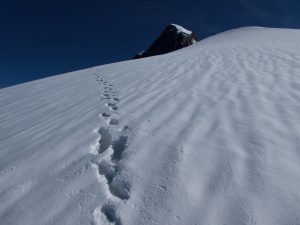 After stopping to put on sunscreen and strip down to a t-shirt, I followed a boot-pack and bits of trail up the mixed talus and snow of the broad lower ridge. The snow was still almost hard enough to demand crampons, though there were some frozen postholes suggesting that it turns awful in the afternoon. I carefully crossed a somewhat-narrow snow arete, then a bit of easy rock scrambling, then another narrow snow-ridge leading to the base of a rock step. As I carefully walked across, I watched a lone climber make his way up the final snowfield to the summit. 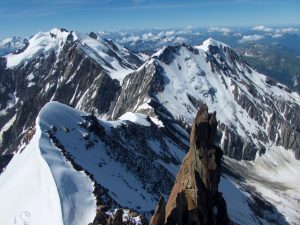 Back toward col from rock

Though there was some loose rock, most of it was solid, a welcome change from the Ailefroide. My guidebook talked about taking some couloir to the right, but following the crampon marks and doing what seemed right kept me on or just right of the crest most of the way. The rock there consists mostly of solid fins with good positive edges, making for enjoyable, exposed climbing. The crux was probably an airy traverse into a corner, followed by some steep climbing and a big step right on the ridge crest, protected by a bolted chain. This step will get a lot trickier when a sketchy-looking but well-used flake finally breaks off under someone. 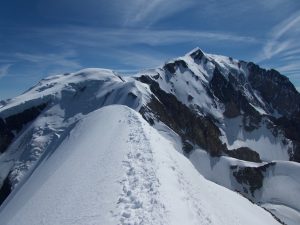 Above, I continued without crampons, carefully booting up the softening snow, with some underlying ice in places making it trickier here. I passed the man I had seen earlier on his way down and, a few minutes later, emerged on the summit snow-crest. There was a well-established path continuing toward the Dome du Gouter, where it presumably joined the standard Gouter Ridge route to Mont Blanc. I was vaguely tempted to continue that way, but it is another 2000 feet of gain to the summit, and descending the Gouter Ridge would put me in some weird place far from my car. Instead, I had a sandwich, sent some email (there’s 4G on the summit, of course), and took in the views of Mont Blanc to one side, and the impressive Dome du Miage and Aiguille Blanche to the other. 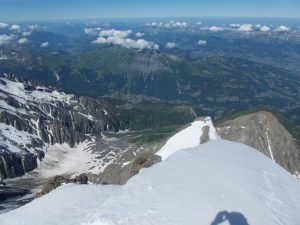 I started down in just running shoes, then thought better of that and finally took out the spikes. The transition took an extra few minutes when I realized that I had lent them to Peggy back in the Tetons, who has small feet, and had not used them since. Once I got that sorted out, I carefully downclimbed the rest of the summit snow, facing in on some icy parts. The rescue helicopter I had been watching all morning did a circle overhead, seemingly patrolling for stuff going wrong in the area. This might actually be justified, as Mont Blanc sees an insane number of deaths by American standards — about 100 per year. Les flics montagnards are talking about making a minimum-gear law, but I don’t think it has been imposed yet. Get it while you can.

I made my careful way down the rock part, expecting to see and pass the Frenchman I had met on the way up. I was almost off the rock when I heard a shout, and turned around to see him standing on a sketchy snow ledge too far right of the route, preparing a rappel into worse terrain. In addition to the bolted-chain rap stations on the standard route, there seem to be a handful of slings elsewhere, added by people who were more or less lost. Alain had apparently strayed climber’s right, then used one of these.

After a bit of exploration, I determined that he couldn’t rap sideways back on-route, and suggested that he climb farther right, up a corner, and back toward the crest of the ridge. I watched somewhat nervously as did a bit of careful climbing across snow and choss, then laybacked up next to a flake and disappeared around the corner. When he didn’t reappear on the route a few minutes later, I climbed back up to see what was going on. I wandered around a bit, eventually finding him higher up the ridge than he needed to be. I directed him back through the crux, which is not obvious from above, then down the ascent route to the snow. 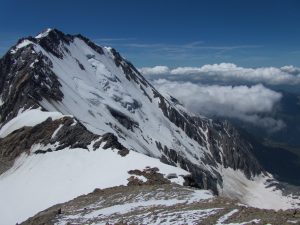 I stuck with him the rest of the way to the hut, engaging in some stilted conversation in my still-awkward French. I learned that he had been coming to the Alps for 40 years, and had driven down from Paris for the weekend. I did that sort of thing a decade ago while in school in LA, driving up to the Sierra on Friday nights, but I don’t think I could do that now, much less 20 years from now.

I took him up on his offer of overpriced beer and obscenely-priced water at the hut, which went well with my remaining sandwich. I also met the hut keeper, who showed me a gloriously French ennui and lack of interest. She apparently reserved this privilege just for me, as she seemed normally friendly toward the other (French) climbers; maybe I just have some incredible unconscious anti-charm.

I bid farewell to Alain just below the hut, bombing down the scree-ridge and passing some more climbers on their way up. One pair was planning to stay at the hut, then traverse over the Bionnassay to Mont Blanc and down the Gouter Ridge. Below the Plan du Glacier hut, I began encountering day-hikers, who had made an impressive effort to reach this spot 1600 meters from the valley road. The cafe at the Chalets de Miage looked like a happening place, but I hadn’t brought any money, so I just kept on down the road to my car. I moved it into the shade, then had a seat to read, write, and plan what to do next. I had plenty of time to drive to Chamonix, but figured camping here would be much easier and quieter.

Coffee and wine in every direction

Back toward col from rock