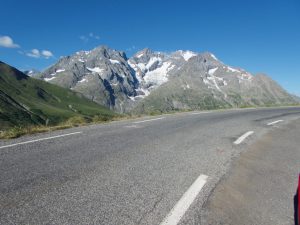 Though part of me wanted to spend more time in the relatively laid-back Écrins, I needed a day off, and figured I would be bored if I didn’t put it to some use. So it was time to drive boldly into the tourist pits of Chamonix. My phone plotted some stupid toll route through Italy, but I saw a little gray line on the map that looked more direct. If it was both more direct and slower, I suspected it would be more interesting. I was right — the road turned out to be the Col du Galibier, a ridiculous mountain road I had seen many times on TV while watching the Tour de France. 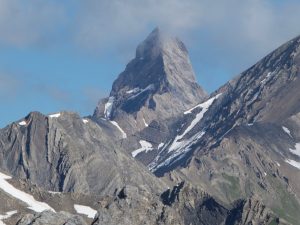 There were quite a few cyclists on the road, and some motorcycles as well, but not much car traffic, so the narrow road with no guard rails and lots of blind corners was not too stressful. There is a sort-of useless tunnel cutting off the final few switchbacks of the pass, but I drove to the top, then got out to look at the informational sign pointing out the various peaks. Probably most impressive, I had a clear view of the nearby La Meije, a complex 3983-meter peak on the northern end of the Écrins range. Farther away, the Barre’s glaciated north face was finally visible, standing tall above its neighbors. The nearby Aiguille d’Arve also made an impression, looking like a small Matterhorn. I probably should have climbed the nearby Grand Galibier, but this was supposed to be a recovery day. 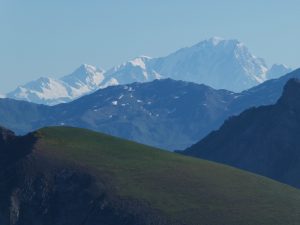 I continued down the eastern side of the Galibier, through a ski town and over the Col du Télégraphe, a barely-noticeable bump on its west side, then continued descending to the highway. I put in some quick, mindless driving, then turned off on the road through Ugine to reach Chamonix. This part of the drive was much more engaging, with the road winding along the side of a narrow gorge, and enough traffic to keep me alert. The road eventually deposited me at Saint-Gervais-les-Bains, which was near my next trailhead, but also proved to be a terrible tourist pit with no usable WiFi. I needed to get online and also buy another SIM card to replace my Spanish one that, though promised to work in France, did no such thing.

Wading through the weekend mobs, I eventually found a parking spot and some usable internet outside the Montenvers cog-rail station. It was mid-afternoon, so in addition to the expected tourists, there were lots of fit, attractive climber-couples coming off the train in mountain boots, with various route-dependent climber-stuff hanging off their packs (ropes, rock shoes, ice tools, etc.). There was also a steady stream of mountain runners, more and less poser-ish, in the requisite uniform of compression leggings and Salomon running vests.

After taking in this scenery and completing my internetting, I headed into town, where I found a news stand that sold overpriced French SIM cards and data plans. Whatever… I’m saving money by sleeping in the back of a little Citroën and not riding trams, so I can afford to spend money on communicating and not being lost. Then it was back through Saint Gervais, where I tried and failed to get the rental up a steep dirt road toward the Chalets Miage, then gave up and slept near the base around 1000 meters. It would be a long day…