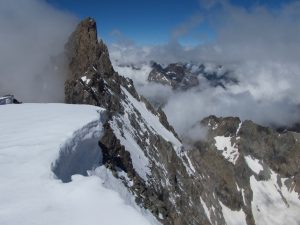 I wanted to do something else in the Écrins, and l’Ailefroide seemed like an obvious choice for which I would not have to repeat any ground. The highest of its three summits, the west, has over 2000 feet of prominence, and my guidebook describes a traverse from the east to the central peak, rated AD and 3c/4b (i.e. 5.4-5.6). I figured I could extend that traverse to the highpoint for an adventurous day. It turns out, though, that the Alps aren’t all as friendly as the Barre des Écrins. 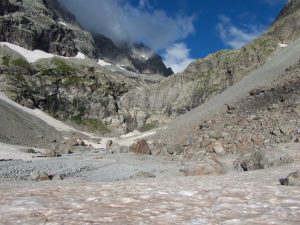 I got a leisurely start toward the Sélé hut, passing a couple of older solo hikers and being passed by a young trail runner. I was carrying a full pack, and feeling the previous day’s effort, so I made no attempt to keep pace with her. The trail steadily gains elevation until reaching a headwall just below the hut, with a waterfall pounding through a slot to one side. It is not obvious how to reach the hut, but the trail winds its way up the cliffs with a mix of ledges, chipped steps, and handlines. The hut seemed deserted, but I saw smoke coming from the chimney, so at least the guardian was there. 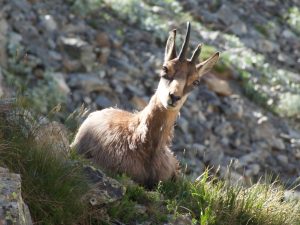 Beyond, I followed a faint and somewhat-cairned trail across the morainal flat, then up toward and past the old hut. While the trail apparently sees some use, it is far less traveled than the one leading to the Barre, and somewhat hard to follow. However, it was obvious where I had to go: up a mix of scree, grass, and slabs toward the Glacier du Coup de Sabre, named for a sharp notch in the ridge to its north (the saber cut). 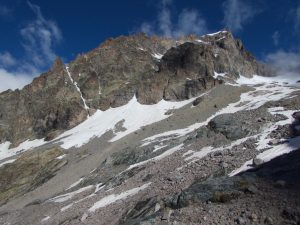 Below the glacier’s tongue, I traversed left across some flatter ground, then followed a faint old boot-pack to the base of the access couloir through the Ailefroide Oriental’s south ridge. The previous party, probably wearing boots like everyone does here, kicked steps all the way up the gully. Being in trail runners, and not wanting to switch into crampons, I stepped over onto the rock to its left at the first opportunity, then had an easy class 2-3 scramble to the ridge. 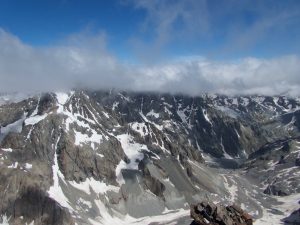 The rest of the south ridge looked like it might go, but the route description said to climb the snow to its left, and I meekly obeyed. There was a lot of elevation to gain, so the climb was tiring, but never difficult. The south-facing snow had already softened lower down, leading to some minor postholing. I eventually plodded onto the summit plateau, where I could see the Coup de Sabre to one side, the rest of l’Ailefroide to the other, the head of the Glacier Noir below, and… still not the Barre, which was covered in clouds.

I ate my Camembert baguette, the last of my food, and sat around for about a half-hour debating whether or not to continue. The ridge looked tricky and time-consuming, with gendarmes, choss, and snow-rock transitions. Retracing my steps would be fast and easy on the soft snow. Eventually, after more than a half-hour of dithering, I committed to the traverse.

The initial descent was a slow mix of snow, choss, and small pinnacles taking longer than it looked like it should. I eventually reached the base of the first gendarme, the supposed 5.4-5.6 crux, and was somewhat dismayed. The route description said (I think) to go straight up the ridge, but that seemed to have an overhanging start. Instead, I descended a bit to the south, then meandered my way up easier ground trying to get back toward the ridge higher up. I found a sling or two, but not anything that I felt confident climbing, so I eventually gave up and contoured around the thing on choss.

Next up was Pointe Fourastier, a slight larger gendarme. (Everything has a name here, even the ironically-named “Pic Sans Nom” between l’Ailefroide and Mont Pelvoux.) The guide had an elaborate route description I did not entirely understand — I am bad at French mountain jargon — but I understood enough to follow the hand-line (!) and old pitons much of the way. The pitons seemed to lead to a face/dihedral I didn’t like, so I traversed left around the corner. I scrambled up some easier ground, then climbed through a tunnel/chimney to nearly reach the Pointe. 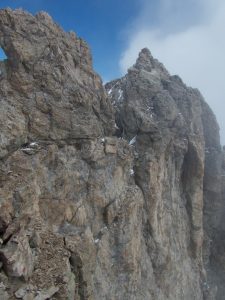 From there, the guidebook correctly described a traverse on a wildly-exposed ledge to reach easier ground. I actually enjoyed the ledge, and while the “easy” ground was obnoxious and chossy, it at least wasn’t stressful, and I soon found myself on the Ailefroide Central. The highest summit is only a few hundred meters from the middle one, but clouds seemed to be gathering, and it looked like things turned complicated, so I quickly gave up and started the descent. 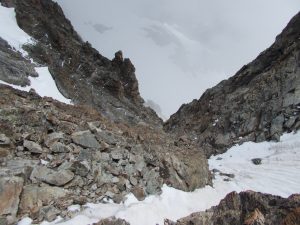 The guidebook said (I think) to “return west to the first couloir,” which makes no sense: I came from the east, so I could either “return” or “go west,” but not both. Since I was already west of the central summit, I decided to do the latter, heading down some garbage-chute that I hoped wouldn’t cliff out. I refilled my empty bladder from a muddy trickle partway down, then continued toward the probable badness. The book mentioned rappels to reach the glacier (not surprising), but said that you could avoid them, though possibly only with another rappel (what?!). 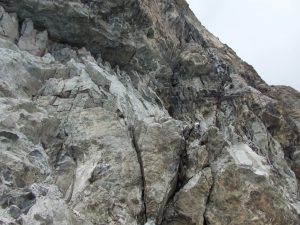 This seemed like the kind of messy chossineering problem I can normally solve, so I went for it. Sure enough, the situation was exactly what I anticipated. I tried sneaking down near the line of rappel along some wet ledges, only to be defeated. Next, I headed skier’s right losing elevation whenever I could. The upper edge of the glacier also dropped in that direction, though, so I tried to come back left when I could. After some sketchy moves and a bit of backtracking, I found a miraculous and sometimes quite narrow and cramped ledge that led down and right nearly to the snowline, from which I could reach the edge and cross the easy moat.

The Ailefroide Glacier seems fairly well-crevassed, but following a hint of an old boot-pack and a generally conservative line, I reached the slabs at the bottom without any problems, and even had some good boot-skiing lower down. Unfortunately, there was still quite a bit of descending to do on a mix of slabs, grass, and morainal debris, but I found no more serious obstacles getting to the valley floor. I was feeling energetic enough to run most of the trail below the headwall, passing the odd day-hiker, but no one equipped for mountaineering. It seems to be relatively easy to get off the beaten path in the Écrins, something I don’t expect to do in Chamonix.