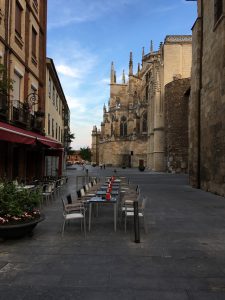 Back of cathedral and tapas tables

Because my connecting flight took off at 6:15, and because I am cheap, I saw no reason to get a room in town when there was an airport to sleep in. The Dublin airport is not big and busy enough to sleep unobtrusively in a corner, as I have in Mexico, Ecuador, and the United States, but it looked like a few people were sleeping in the 24-hour food court. I tried my best, getting maybe 2-3 hours, and was fortunately awake when an employee inexplicably came around at 4:00 AM to tell people they couldn’t sleep there. I shuffled back through security, then made the most of a meager airport lounge before boarding the plane. Oddly, we boarded by taking a bus to a holding area, then climbing stairs from the tarmac; similarly, we disembarked via stairs and buses in Madrid. I assume that Aer Lingus saves money by doing this. 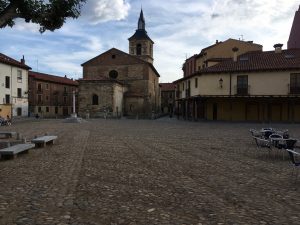 Finally reunited with my heavy and awkward bag of climbing stuff, my next goal was to get out of Madrid. After a mistake, I figured out that I needed to take the Renfe train rather than the metro to the central train station, where I bought an overpriced ticket to León on the Avila, Spain’s version of high-speed rail. The trains can do 300 kph, but only on suitable tracks, so with three intermediate stops and unsuitable track on much of the route, the ride from Madrid to León took a bit over two hours. Fortunately my travails with monolingual Spanish speakers ended here, as Mike and Linda picked me up at the station. While I know enough Spanish to have dealt with similar circumstances in Ecuador, some combination of sleep deprivation and fast Castilian Spanish was getting the best of me. 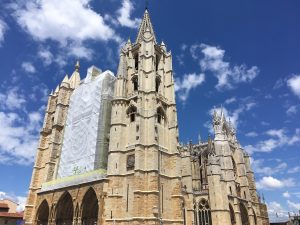 Since we were already in the city, it was time for a bit of tourism. First up was the León cathedral, an impressive structure built in the 14th century, when the city had a population of only around 5000. I am not a cathedral connoisseur, but I found it worth the entry fee. Next was the old city, a walled section of the modern one with very restricted car access. Unlike many old cities, which tend to become museums full of tourists, León still seems to serve its inhabitants. Many of the buildings in the old city show signs of centuries of repair, and even feature modern graffiti, though I saw none on the church or city wall. Some people were even playing some horrible music as a sound check for what turned out to be a youth flamenco performance on a stage in the church square.

From a dirtbag perspective, perhaps the best thing about León is tapas. Order a corto (small beer) for about $1.50, and you get free food. Sometimes it is the kitchen’s choice, but often you get to pick from various appetizer-like things like sausage, ham, or sardines on bread. From 8:00 PM to midnight or so, you can go from bar to bar among the Spaniards, assembling a leisurely meal. Sometimes tapas even appear in unexpected places. On a later visit, we stopped at a meat-and-cheese shop for some cecina (basically dry Spanish ham made with beef). Unprompted, and before we had even asked for something, the lady behind the counter gave us each a piece of bread with samples of cecina and two types of sausage. Score!

The next day, we combined bureaucracy and tourism with a trip to Avila, a cartoonishly perfect medieval walled town. I was duly impressed by the architecture, but unlike León, most of Avila’s old city seems to serve mostly tourists. There is even a fee to walk on top of the wall, which I did not deign to pay. I could imagine living in León, but never Avila. But enough of that — while I may circle back for some cultural musings later, you come here for the peak-bagging, so I will provide.

Back of cathedral and tapas tables

2 responses to “Bienvenidos a Benavides”