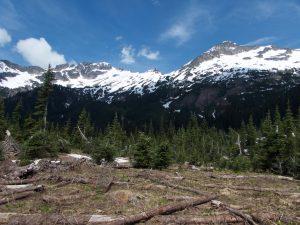 Fortress and Chiwawa are two high peaks at the head of the Chiwawa River, reached via a long, partly-paved forest road and a decaying trail. (According to Wikipedia, “[t]he river’s name comes from a Columbia-Moses term meaning of kind of creek (‘wawa’ creek).” To my disappointment, it does not reflect pre-Columbian trade between the northwest tribes and the Toltec breeders of yappy ankle-biters.) They would normally be a civilized day by Cascades standards, about 20 miles and 7000 feet of elevation. However, when I drove up the evening before, I was dismayed to find that the road was closed partway up, adding an extra 11 “bonus” miles. It still took less than 12 hours, but the morning and evening road commutes pushed the outing in the direction of type II fun. I had originally attempted these peaks in 2010, but I was weak then, and turned around a short ways into what I now consider a moderate bushwhack. 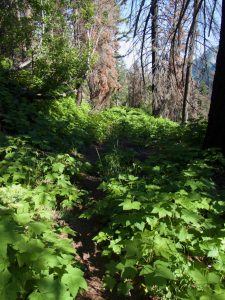 Thanks to the road closure, I had the area to myself except for a strange guy on a touring bike in the morning, and a few campers in the evening. I mostly hiked the road to the trailhead, then pushed through the encroaching brush around some private property and up along the Chiwawa River. The brush is not bad on the east side of the Cascades, but it was thick and wet enough to give me a good leg-washing as I climbed from 2700 feet to around 4700, where the trail forks. It is supposedly possible to approach Fortress via the right fork, an old mine road, but the left seemed better-traveled, and left open the possibility of returning via Red Mountain and the mine. 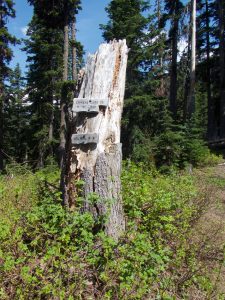 I lost the supposed trail in one of the avalanche paths in the broad valley bottom, continuing through easy woods to a stream. Not liking the look of the rushing water, I made my way downstream to where the trail was supposed to be, to find a wider, slower, but still unpleasant-looking ford. Instead, I headed back upstream to a flat, braided area, where I crossed on a series of logs, then crossed a small ridge to regain the route. 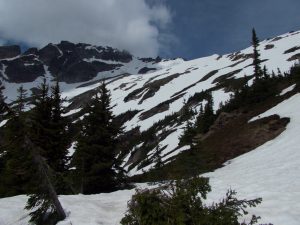 From 5000 to about 5800 feet, I found a faint trail climbing through open woods on an indistinct ridge. Above this, I kicked my way up steep snow next to the ridge until it merged with Fortress’s broad southeast face. My road miles began paying off, as what might have been an annoying scree traverse was instead an easy diagonal ascent on mostly-consolidated snow. To my surprise, I found a line of tracks, which proved to be a boot-pack from a couple weeks before. Thunderstorms were brewing to the east, and mist began forming over Fortress, but neither seemed to be turning threatening. 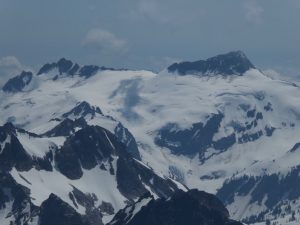 Where the snow steepened below Fortress’ summit, I followed the boot-pack onto the ridge, then followed the north, mostly snow-free side of the ridge toward the summit. The lingering snow forced me onto some fourth class rock that can probably be avoided later in the season, and a cold wind from the north annoyed me from time to time, but I found no serious difficulties on the way to the summit. I found a sheltered spot, then watched neighboring Glacier and Clark Peaks go in and out of the clouds while I had a snack and glanced through the wad of paper in the PVC register canister. 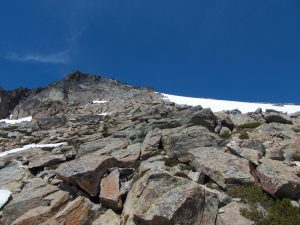 The wind remained, but the weather improved as I retraced my steps down the ridge, then slid and side-hilled south of the ridge to the saddle with Chiwawa. I could have followed snow for most of the 1200 feet from the saddle to the summit, but an exposed talus ridge seemed more efficient than the softening slush. Unfortunately, the loose talus proved treacherous, and I managed to cut myself when a large rock shifted under me and squished my hand. I fortunately avoided yet another broken hand, but the thing hurt and bled profusely for the rest of the climb. 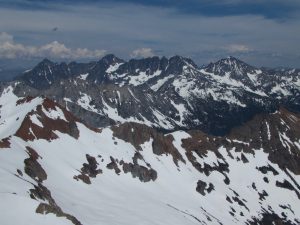 The clouds had dissipated by the time I the summit, and I had excellent views of Bonanza and the nearby Entiat peaks, and of other peaks familiar and unknown to the north. The ridge around to Red looked annoying, so after a snack, I returned southwest the way I had come. Early in the season, this normally knee-pounding descent was instead a wonderful 2000-plus-foot boot-ski. For mysterious reasons, I decided to try fording the creek instead of going around to its head like I did on the way up. This proved unpleasant, with fast-flowing water reaching above my knees at one point. After a bit of wandering, I regained the trail, then jogged the sections where I could see my feet through the brush. I switched into shorts at the trailhead, then tuned out for the monotonous road-jog back to the car.

Miscellaneous peaks to the north

Glacier and Fortress from Chiwawa