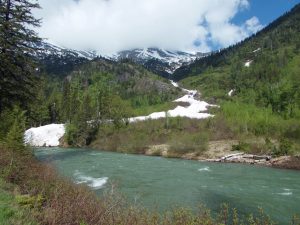 Early-season conditions can be frustrating sometimes. After a day lost waking up to a steady drizzle, I hoped to traverse a ridge of peaks northwest of Lake McDonald, from Stanton to Heavens. The park had opened more of the Going-to-the-Sun road, allowing me to drive to Avalanche Creek, only a couple of miles short of the direct route to Heavens. I lucked out in choosing to start at the north end, because it turns out I would have been trapped on the wrong side of McDonald Creek if I had ened there instead, facing a long, nasty bushwhack either way to reach a crossing. The trip reports I found suggested either fording the creek or crossing on logs, but there were no suitable logs, and the “creek” was a raging river that I did not feel comfortable trying to ford. 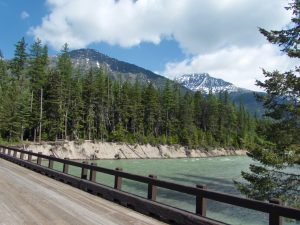 After that disappointment, I drove to the other end of the ridge, then hiked over a mile of gated-off side road to the trailhead. It was late morning by now, and punishingly hot, so I didn’t feel particularly ambitious. I followed the trail through an old burn to the saddle between McDonald and Camas Creeks, ducking a number of blowdowns, then took off on a game/use trail toward Stanton, at the southern end of the ridge. The mosquitoes were out in force between 5500 and 6500 feet, above which there was enough of a breeze to keep them grounded. I found bits of trail here and there along the ridge, which could have been made by either humans or goats. 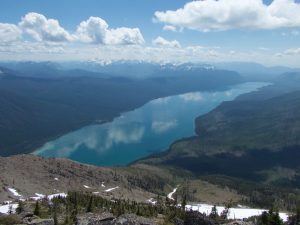 I should have continued to the higher Mount Vaught, but doing so would require re-climbing Stanton on the return, and I was feeling lazy. After some time a safe distance from the disgustingly ladybug-infested summit, where I unsurprisingly found a tick on my pant leg, I returned partway along the ridge, then dropped straight to the head of a slide path. The consolidated snow made for decent boot-skiing that eased the descent to the trail, with only minimal bushwhacking lower down. I should have run the trail, but simply fast-walked in the mid-afternoon heat, in no hurry to return to my car.

Vaught and Stanton from ridge