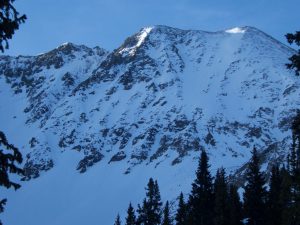 Welcome to the 2018 season! The early part of this season should be a bit different, because thanks to my “Scott sponsorship” (the man, not the brand), I have AT skis. I was hoping to use them this winter, but the dismal winter in the southern Rockies, among other things, scuttled that plan. Maybe next winter I will pick somewhere likely to have a better winter. 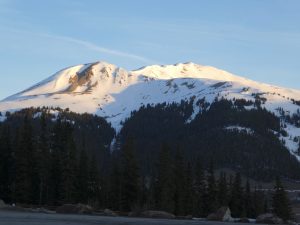 Instead, I started my ski season in May. Just like last year, where my first run in several years was a survival-ski down the Middle Teton Glacier, I chose something hard enough to guarantee more survival than fun. When I climbed “Drift Peak” near Leadville last spring, I traversed from Fletcher, then plunge-stepped down something I thought might make a good ski run. Since I needed to break up the drive north, I decided to return to Mayflower Gulch and try skiing it. 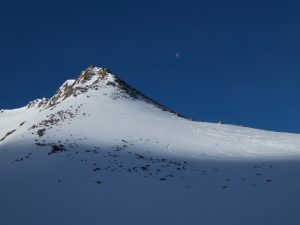 Mayflower is a popular backcountry ski trailhead, so there was one other person camped there, and two more trucks arrived before I started skinning up the road around 6:30. There were the usual spring dog turds melting out of the track, but still just enough snow coverage to ski from the parking lot. I took my time skinning up the road toward Boston Mine, passing one side-road before taking another that seemed to get a fair amount of traffic. I eventually emerged from the woods at the bottom of a broad, gentle slope that looked to be a popular ski. 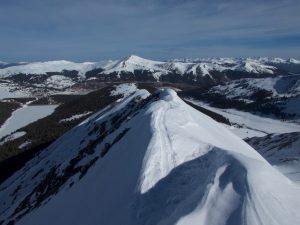 There seemed to be several possible ways to reach Drift’s northwest ridge, so after some annoying sidehilling, I switchbacked and booted up one of them at random. I had come up too early, and had to walk along the ridge a little before picking up the skin track, which made its way somewhat precariously along the ridge crest. No doubt this avoids avalanche danger earlier in the season. 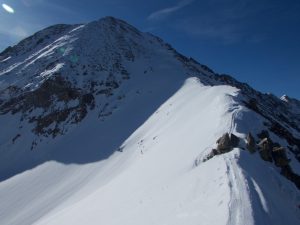 From below, I had seen a couple of people switchbacking up the ridge’s headwall, and indeed there was a nice zig-zag track. However, it was steep and side-hilled enough that perhaps it was meant for ski crampons. I carefully followed it for awhile, back-sliding occasionally, then put my skis on my back and slogged up the exposed talus to the summit ridge. A combination of lack of fitness, a heavy pack, and altitude made the climb shamefully slow. 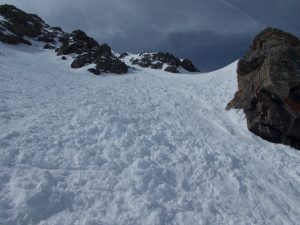 I sat on the summit for awhile, watching people summit nearby Quandary, then switched to downhill mode and carefully side-slipped around some rocks to the face. This seems to be a popular ski run, showing 4-5 recent tracks made by people much better than me, i.e. able to link nice S-turns. I struggled a bit with the crusty powder and frozen snowballs, making a few cautious turns, then stopping to pant and plot my course.

The slope steepens near the bottom (50 degrees?), and splits into several narrow chutes separated by rock buttresses. I almost started down the wrong one, then followed the tracks skier’s right across a few to the correct one. It was still steep, narrow, and slow, but it went. Finally, on the smoother apron below, my old ski racer instincts kicked in, and I was able to carve some nice super-G turns and then shoot straight down the low-angle slope toward the parking lot. I had planned to spend another day in the area, but the spring snow was obnoxious enough that I decided to try my luck farther north.

Mount of the Holy Cross

This entry was posted in Colorado, Skiing. Bookmark the permalink.