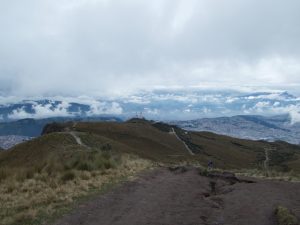 Pichincha is Quito’s local “workout peak,” with a network of semi-official trails leading up to and around its two 15,000-foot summits, and a gondola running from an amusement park in town to just over 13,000 feet. The hike to its lower, closer summit, Rucu Pichincha, is popular with the locals, and we had plenty of company on our weekend stroll up the trail from the tram. 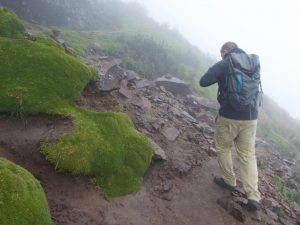 Ted had flown in the night before and obtained the rental car, as powerful and spacious as a rider mower, so we drove over to the base of the gondola and took one of the first cars after it opened at 8:00 AM. Conditions started out cloudy, with the usual drizzle starting about half-way to the summit. Ted was coming from 5,000 feet, so I had a big advantage in terms of acclimatization. We hiked together for awhile, then I left him to tag Rucu and continue to the high-point, Guagua, on my own. The final 100 yards to Rucu’s summit involved a bit of easy class 3 rock partly covered in rime ice, causing some people a bit of trouble. 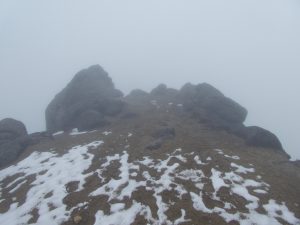 I took in the summit non-view for a few minutes, then returned to a gap in the ridge where the trail splits off toward Guagua. Right at the fork, I caught up to a fast-looking trail runner apparently headed the same way as myself. We talked a bit in broken Spanish and English, to establish that I wanted to run with him, then we took off down the volcanic sand, running the flats and downhills, and walking the uphills. I learned that he was indeed fast, with a 2:38 marathon PR, but fortunately the stretch we ran together was mostly downhill, so he did not have a chance to crush me with his cardiovascular skills. He was carrying only a Gatorade bottle for a 20-mile run, while I had my mountaineering pack, but I managed to keep up without suffering too much. 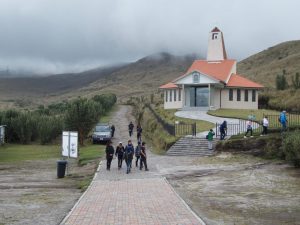 We parted ways at a split in the trail, he to descend and make a loop, me to continue along the ridge to Guagua. After more easy going along the ridge, the final 500 feet up Guagua was a grim, loose sand-slog. I reached what I thought was the high-point, checked out the clouds, smelled the sulfur from the crater, then headed back for the tram. The sand was much more fun on the way down and, inspired by my running pal from before, I jogged the flats and downhills on the way back, reaching the tram in the mid-afternoon.

We headed back to town, got our stuff from the hotel, then visited a weird equator museum north of town, “El Mitad del Mundo.” We closed the place down, then drove back through Quito and south, retracing most of my earlier journey through Machachi to El Chaupi before turning off on a side road toward El Corazon, a lesser neighbor of the Ilinizas.

Here we were bedeviled by our car’s incredible lack of power. It could climb the dirt and cobble road, but only if we stayed above 20 km/hr. If we slowed below that, we had no choice but to coast back down to a flat spot and get another running start. We were also frustrated by a lack of good places to camp. After checking out some flat-ish fields full of cow pies, I eventually spotted a fenced-in concrete structure with a flat roof, which we made our rainy campsite for the night. Fortunately no police or locals bothered us, and I even got a decent night’s sleep.