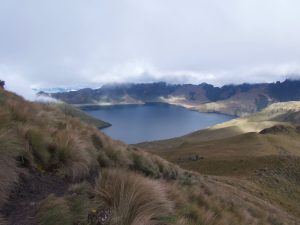 I hadn’t liked the look of things south of Quito, so I decided to try something in the other direction. There are several volcanoes in the general vicinity of Otavalo, two of which caught my interest: Cotacachi, famous for its steep and loose summit block, and Fuya Fuya, the highpoint of a collapsed volcano containing a large lake, and an easy walk-up. If I felt good and the weather looked okay, I could do the former; otherwise, I could do the latter and sleep at the 12,000-foot lake for acclimatization. Fortunately the lady at the expensive airport bag check place didn’t charge me anything to take out my bag and put it back, so I was able to stash the heavy mountaineering gear before heading north. Unfortunately, my plan to sleep in the lounge was ruined by a lounge guardian who rigorously enforced the 5 hour stay limit for my card. So I took a shower, slept a few hours in the lounge, then tried to sleep a bit more in the food court before heading north.

Once again, the bus ride took a significant portion of the day, with a slow city bus to Carcelen, then a faster regional bus retracing part of the route before heading northeast through Tabacundo to Otavalo. Despite the mountains being hidden in clouds, it was a pleasantly scenic drive, with the road winding in and out of deep canyons beneath hundreds of feet of shored-up hillside. Ecuador apparently doesn’t do bridges. Unfortunately, the ride was also the perfect length to show a terrible Rosario Dawson car chase movie dubbed in Spanish, which I found hard to completely ignore.

Otavalo and its market square are well-known tourist destinations, so I saw the expected gringos and signs in English, but they were few enough not to spoil the place. It may have helped that Otavalo has been a market town since before the white man came to South America. I walked around the edge of the market, keeping a safe distance so as not to tempt the blanket-sellers, then bought a tasty chicken empanada for 85 cents on my way toward the Plaza Bolivar, passing along a wall covered in Simon Bolivar-inspired street art. I don’t know if he is as revered in other South American countries (except Bolivia), but it seems like just about every Ecuadoran town has a Bolivar square and avenue, and often others named for his generals. Even the country’s old currency, the sucre, was named for Bolivar’s compatriot Mariscal Sucre.

Along the way, I passed locals dressed in both modern and traditional clothes. The women’s fashion was particularly distinctive, with blue skirts, white puffy blouses, and either black bowler hats or what looked like folded lengths of felt on their heads. Many of the men also wore bowlers, but they did not seem to be as consistent. The women also carried children or loads on their backs in shawls wrapped over both shoulders and tied below the throat.

The sun finally came out in the plaza, and I sat on a bench to take in the church, city hall, and giant bust of Rumiñahui, the Incan war leader who took over after the Spaniards captured and killed the king. After observing the crowds for awhile, and talking to a couple of adventurous young Colombians backpacking down to Argentina, I went off to look for the bus toward Cotacachi. I found what I thought was the right corner, but the bus that came by was headed elsewhere, and after waiting another ten minutes, I gave up and headed toward Laguna Mojando. 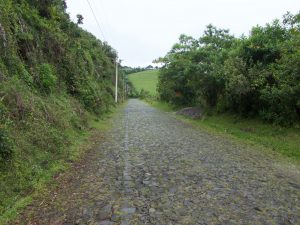 From this side, just about any car can reach the lake above 12,000 via a remarkably smooth cobblestone road. However, I had no car and too much free time, and I wanted the acclimatization, so I put on some listening material and started walking up the road. The rain started less than a thousand feet up, and I put on my poncho as it strengthened. It turns out that there is also a “Quechua bus” on this road, driven by a local man in a bowler, serving the native communities in the valley. He graciously stopped when I waved at him, and saved me most of a mile of wet walking for all of 30 cents. 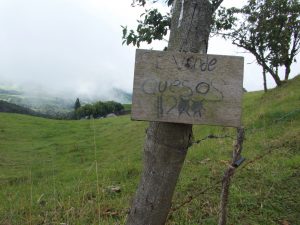 Higher, the road continues past more scattered homes, both occupied and abandoned, including one for sale for what I took to be “cheese and $200.” Not a bad place to live. The best house, however, was on the other side of the valley, and could apparently be reached by a massive zip-line. Nearing the lake, I finally got some views of Fuya Fuya’s impressive northeast face, one of the few surfaces in the area too steep for vegetation. 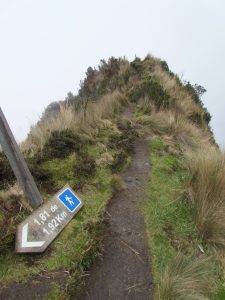 Reaching the lake, I found one car parked, and a couple people fishing around the lakeshore with a boat. I also found a friendly stray dog who seemed to have chosen a less than ideal place to beg. After tanking up on food and water, I hid my pack, tied my jacket around my waist and started hiking up the trail to Fuya Fuya. Though it had signposts in a few places, the trail went straight up the hillside in a very unofficial way, crossing sometimes-tricky mud and wet grass. 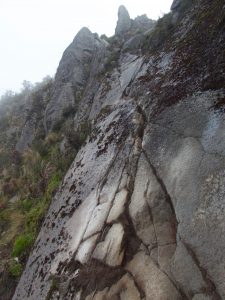 I reached the ridge east of Fuya’s east (easier) summit, from which I could admire views to both sides of… clouds, of course. This is Ecuador — what do you think I would see? Nevertheless, I continued over the east summit and on to the west. There was a fun little third class diagonal crack along the way, made somewhat more tricky in the wet, but I reached the west (true) summit quickly enough, and spent a couple minutes enjoying uniformly gray views before retreating to descend a trail from near the saddle between the two summits.

Back below the clouds at the lake, I filtered some water while the dog looked on, then continued along the road toward a campground and possibly hostel on its southeast side. The cobbles end at a shelter below Fuya, so the road from here on was a mixture of puddles and slick mud. My faithful companion followed at a safe distance, and I felt bad that I had not saved a piece of the sausage I ate on the long hike up the road. My hope to reach the official camping area dwindled as the light faded and the road climbed and descended maddeningly above the lakeshore. Finally, near dusk, I found an established campsite near the lake with a water diversion channel carved around a flat grassy area. It seemed like as good a place as any to put my bivy. The dog hung around for a few minutes, then, hungry and disappointed, took off barking after something I didn’t see. I covered my pack with my poncho and tried to get some sleep.