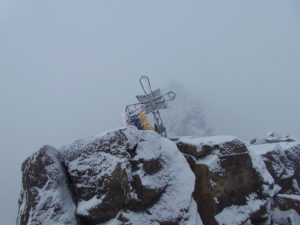 [Please excuse the longer-than-usual posts. This trip was tourism as much as peak-bagging, and descriptions of such tend to get wordy. — ed.]

The long approach began inauspiciously. Unbeknownst to me, there had been an ice storm the night before in Denver, and I slipped on some black ice just three feet from Ted’s front door while carrying my bags to the car. I landed unhurt on my rear, but could have easily banged my head on the doorstep, earning what could have been the lamest “not wearing a helmet” ever to appear in Accidents in North American Mountaineering. I carefully stood up, stubbornly refused to put on crampons or a helmet, then carefully put my stuff in the back of the car. Ted dropped me off at the light rail depot, from which two train rides and a lurching walk carrying my big bag o’ gear got me to the Denver airport well before my flight. I checked the BBoG, then pillaged for breakfast with my Priority Pass and twiddled my thumbs waiting for my flight, delayed by the need to de-ice every plane before takeoff.

Thanks to the delay, my transition in Dallas was somewhat rushed. I had just enough time to find the free food dispensary, scoot past the scarf-wearing Middle Eastern women streaming in and out of the Emirates lounge, and grab some mediocre sustenance before being the last person to board the plane to Quito. Fortunately the sardine-packing algorithm had screwed up, and the late-night flight was empty enough for almost everyone to have his own row, so I managed to get a bit of something approximating sleep before my midnight arrival. I needed it, because customs was oddly busy, and it took me an hour to make it out of security and get my bag. While switching my pack from carry-on mode to mountaineering/camping mode (bivy, bag, tools, boots, etc.), I talked to some older Americans with a tour group, then paid too much to stash the BBoG at the airport.

Now to find a spot to bivy. I was too tired to find the WiFi (pronounced “wee-fee” down here), so I blew up my pad and lay down near some signs in the main terminal around 2:30 AM, noticing too late that someone else was sleeping behind them. Waking up again around 5:30, I found the WiFi, and realized I could have spent a much more comfortable five hours in a lounge across the street. I spent a restless couple of hours there instead, grabbed some coffee and snacks, and began the long bus journey south to El Chaupi. 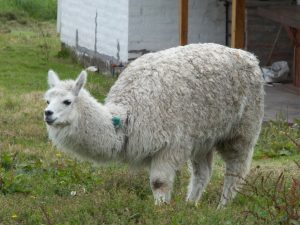 Quito sprawls across several plateaus at the base of Volcan Pichincha, separated by steep thousand-foot-deep valleys, so roads around the city are windy and indirect. They are also impressive feats of engineering, with hundreds of feet of stabilized hillside above, and one significant tunnel. It took about an hour by local bus to get from the airport, on a mesa northeast of the city, to the southern Quito terminal at Quitumbo. From there, another hour in a nicer inter-city bus got me down the Panamerica Freeway to Machachi, where I got on another local bus to the farming town of El Chaupi. This was an all-purpose bus, carrying a mixture of adults returning from the city and Native schoolchildren of all ages wearing uniforms. 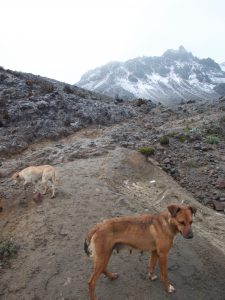 I spent the rest of the afternoon walking the road and trail to base camp; later, I learned that a truck taxi (white with a green stripe) could have taken me to the trailhead for only $10. The day started out hot and humid on the good cobblestone road out of town, then became what I learned was typical Ecuadoran soaking drizzle as the road turned to dirt higher up. I could have walked right past the entrance hut, since the guard was having lunch in back, but I stopped in to check out the situation. He didn’t seem overly happy that I did not have a guide, but after I assured him I was only doing the north peak (true in retrospect), and that I had a helmet (false), he had me sign a waiver and let me by. Higher up, I met a stray dog, said a friendly “hola, perro,” and soon had three strays following me the rest of the way. I had planned to camp at the end of the road, but the drizzle continued, so I decided to grind out another 1000 meters’ climb to the hut between Iliniza’s two summits. The drizzle continued almost the whole way, but I was warm enough in just a t-shirt and my $5 poncho as I powered up the muddy hill through the paramo, passing a couple people going down and a couple going up along the way, the dogs easily keeping pace. 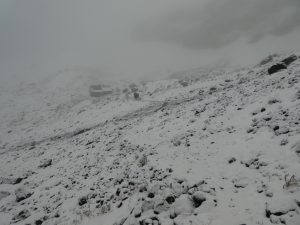 Cheapskate that I am, I had planned to simply dry off in the hut before pitching my bivy outside, but the rain continued, and I met several friendly fellow climbers in the hut, including two from Santa Fe, so I paid the excessive fee for room and board. In addition to the Santa Feans, the night’s group included two local guides, a couple Chicagoans, and three Poles who probably should have tried for the summit, but instead descended the next morning. I had a surprisingly large and good meal of potato soup, queso fresco, chicken, and rice, then failed to sleep while listening to others’ thrashing and labored breathing above 15,000 feet. 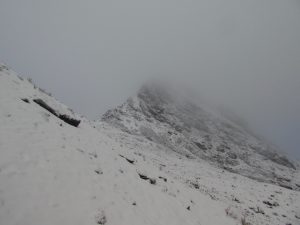 It was cloudy in the morning, with a dusting of fresh snow on the ground and slightly above-freezing temperatures, so I chatted some with the guided groups and had breakfast and coffee before heading out for the summit a short 1000 feet or so above. I soon left the guided folk behind, fending for myself in the clouds. The route crosses volcanic choss left of the ridge lower down, but the recent moisture helped stabilize it, and I followed occasional cairns and boot-paths across the slope and up to the ridge. Most of the ridge was class 2, with a few class 3 steps made more interesting by the wet snow. Below the summit knob, I headed right of the ridge on what was supposed to be an exposed traverse, though it didn’t feel particularly treacherous. Shortly after joining another route up the north slope, I climbed some steeper terrain back up and left to the ridge, then continued a short distance to the summit cross. 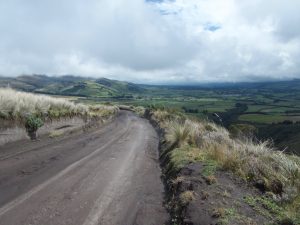 I “enjoyed” the traditional Ecuadoran summit view of clouds and mist, then retraced my steps, passing the lead guide as he installed a hand-line on the “exposed” traverse. I met the other guide and the climbers a short ways below, and learned that they had been a bit concerned that I was just some inexperienced yahoo getting into trouble in the hills. This is why I try not to make assumptions about people I meet in the mountains, and prefer to offer information instead of advice.

Back at the hut mid-morning, I debated my next move. The original plan had been to check out the higher, more difficult Iliniza Sur from the route on Norte, then climb the former via its standard snow/glacier route the next morning. Unfortunately I had seen almost none of the south peak, and conditions seemed less than ideal for climbing a rapidly-retreating and crevassed glacier, with fresh snow, warm nights, and low visibility. Also, I had no reading material, and the hut keeper’s English was as bad as my Spanish, so it was awkward to hang out. It did not seem worth my time to hang around the hut for the rest of the day and sleep out in the wet (or pay the hut fee again), so I hiked back to El Chaupi, then reversed my bus trek to the airport to swap gear, get a few hours’ sleep, and figure out somewhere else to go.

View down toward town