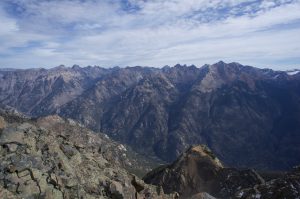 I had set my alarm for 4:00 AM, planning to harvest some of my last remaining cluster of Weminuche 13ers around Noname Creek, but the prospect of 2.5 hours of headlamp and a long commute across from Purgatory crushed my motivation. Instead, I went back to sleep, then drove on up to Andrews Lake for an easier day to West Needle Mountain. This seldom-climbed 13er, south of Twilight Peaks, is a much more reasonable 15 mile round-trip via the Crater Lake trail and the head of Watertank Canyon. 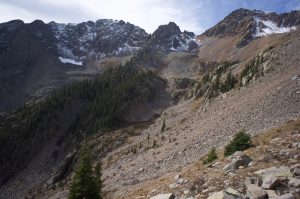 There was only one other car in the lot, but the trail evidently sees quite a bit of horse and foot traffic during the summer. I took my time to Crater Lake, jogging some of the downhills but not in any hurry. Beyond the lake, a trail continues to a gentle saddle at the head of Watertank Canyon, then fades to faint game trails. I descended a bit, then linked benches and ledges on a southward traverse, crossing one obnoxious boulder-field, but otherwise finding fairly pleasant terrain, and a couple of cairns. The rock above looked more like the Grenadiers’ solid bedrock than the Needles’ kitty-litter. 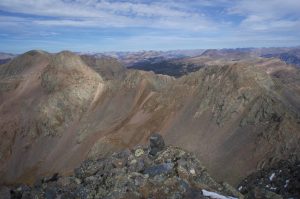 After traversing below some buttresses, I climbed a grassy slope to the col just northwest of point 12,932′, finding a well-used game trail and some sheep droppings. The game trail continues on the other side, traversing south before fading well above the lake at the head of Twilight Creek. After crossing more talus, I finally got on West Needle’s northeast ridge. It looked steep from the col, but turned out to be mostly class 2, with a couple class 3 steps higher up. I wandered around the broad summit plateau a bit, then sat down to admire the view of the Real Mountains east across the Animas.

The return was pleasant and mostly uneventful. Though it was t-shirt weather, I met only one other person on the trail, a man with two dogs, one of which followed me for a couple miles before returning to its owner. There were a few young women fishing at the lake, and a couple preparing for an elk hunt, but things were surprisingly quiet for such a pleasant day. I made part of the drive back to Durango before stopping at my usual Lime Creek camping area.

Engineer from the trail