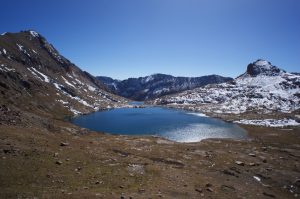 While nowhere near as serious as the Sunwapta ford for Kitchener, which comes directly off a glacier and contains chunks of floating slush, the Vallecito ford is still seriously unpleasant. While it is only 10-15 seconds long and no more than knee-deep this time of year, it must be done early in the morning on a dayhike, when temperatures are still below freezing and the sun has not reached the bottom of the deep valley. Unfortunately, the Vallecito trail is the best access to many deep Weminuche peaks, via Johnson or Sunlight Creek, so I force myself to do it once a year. This year I tried to make it as comfortable as possible, starting late at 6:15 and carrying some old running shoes for the crossing. 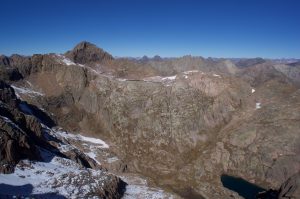 I had planned an elegant lollipop route, heading up Johnson Creek, over McCauley and Grizzly, then across the head of Grizzly Creek to Greylock and 13,121′, exiting via Sunlight Creek. This would also give me a chance to take a side-trip to the highest lake I know of in North America, nestled at 13,100′ below Windom. Unfortunately, the north-facing descent into Grizzly Creek was covered in sugary snow, making it somewhere between unpleasant and treacherous, so I had to improvise. 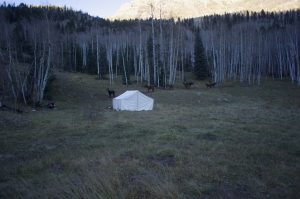 With my late start, I had less than an hour of morning headlamp, though the day had not started to warm up when I reached the crossing about 1h45 in. There was a thin hand line this time, and plenty of sticks for balance. I put on all my layers, took off my shoes, socks, and pants, put on my wading shoes, grabbed a stick, and walked across as quickly as I could. My cold hands functioned just long enough to get dressed again on the other side, where I left my wading shoes and jogged up the trail trying to warm up again. I met a couple hunters looking for elk, then passed their luxurious camp, with several mules, a large canvas tent, and what looked like a heated tepee. 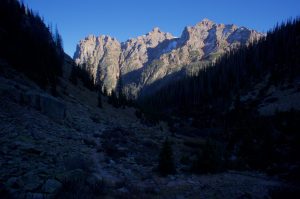 Sunset on Organ and Amherst

I finally met the sun around 9:00, shortly after crossing the Johnson Creek bridge, and was soon comfortable in a t-shirt on the long, switchbacked climb toward Columbine Pass. I expected to find some backpackers, but I had the place to myself other than a bit of trash left by some previous slob. I remembered the trail’s impressive scenery, with the rugged north side of Organ and Amherst across the valley, but I had forgotten the maddening, pointless switchbacks in the middle part of the valley. 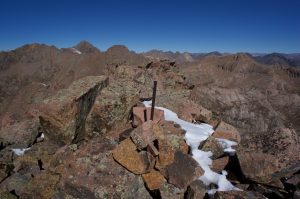 I left the trail in open woods around 11,200′, climbing a mix of grass and talus on the east side of the Hazel Lake drainage, following my descent route from last year. I left the valley before the lake, following a mix of steep turf and class 2-3 rock that deposited me almost directly below McCauley’s summit knobs. The highest, southern one was decorated with a large iron spike. 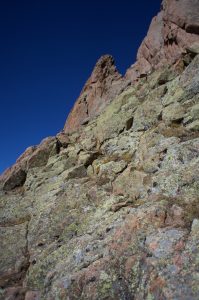 After descending the summit knob, I stayed on or just left of the ridge crest on easy class 2 ground to the saddle with Grizzly. From the saddle, I wove left and right around a few steep bumps, then found an exposed class 3 traverse on the left leading past the final bump, joining Grizzly’s standard route southwest of the summit. From there, I climbed to the ridge connecting Grizzly and Jupiter, then boulder-hopped up its north side to the summit. I examined the snow-covered 1500-foot descent to Grizzly Creek as I ate a Clif bar, and decided I did not want to subject myself to that misery. However, returning directly felt like a waste, so I looked around for other things to climb. 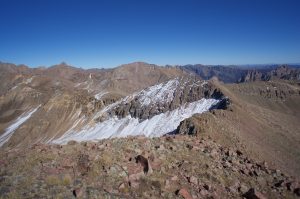 Hope Mountain is only a minor bump on the other side of Hazel Lake, but as an “amphitheater peak,” it has good views of the surrounding higher mountains. I dropped to the lake, got some water, then made my way up the talus to its summit, where I found a wet “geocache” in a PVC tube. With plenty of time to spare, I decided to tag a peak or two south of Columbine Pass. I took the high trail traversing to the pass, looked for tents in Chicago Basin, then easily side-hilled south before climbing the ridge to point 13,190′, which is not a real peak. I still had some time, so I continued talus-hopping over to Aztec Mountain. This was the last unclimbed peak I cared about in the Chicago Basin area, so climbing it eliminated a future trip across the Animas from Purgatory. Yay! 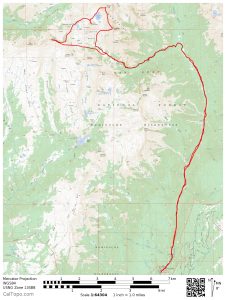 I traversed back south of 13,190′, then dropped down the center of the Johnson Creek drainage, eventually rejoining the trail near where I had left it in the morning. The switchbacks sorely tested my patience on the jog down to the Vallecito, where I met the hunters, still looking elk that I believe are still up in the high country. The return ford was much less miserable, as the air temperature was well above freezing. Hike-jogging the long Vallecito trail, I passed one backpacker on his way out, and reached the trailhead a few minutes before headlamp time. Though I did not tag the summits I had planned, I should be able to clean out the remaining peaks around Sunlight Creek in a single trip next year.

Sunset on Organ and Amherst