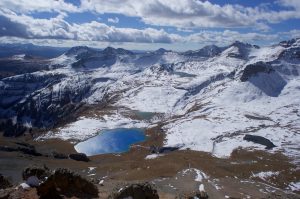 Though the days are short, and snow lingers on north-facing slopes, the weather continues to hold in the San Juans. I had hoped to tag several 13ers near scenic Ice Lake Basin, but a case of projectile diarrhea left me with little energy. Given the timing, I am guessing I was not careful enough in my water choice on the way back from Organ Mountain. Fortunately I had planned ahead, spending all of $8 on suitable antibiotics while I was in Mexico, so instead of driving back to Durango to throw a couple hundred bucks at the American medical-industrial complex, I swallowed two pills and was back to normal in 24 hours. 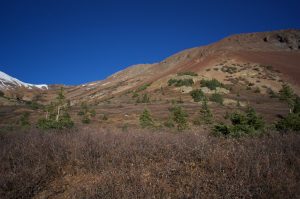 Continuing along South Mineral Creek past the campground, I carefully drove up the rocky road to the trailhead for the Rico-Silverton trail to spend a couple of days cleaning out the nearby 13ers. I started with the ones to the west, traversing from Rolling around to Beattie. Based on an online trip report, I made my way around to Rolling’s southeast side, where I found willows followed by loose talus, then a bit of scrambling along the east ridge to the summit. The east/northeast bowl would have been faster and likely better. 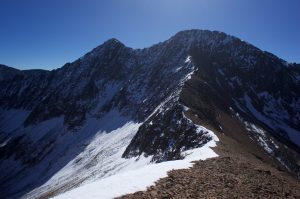 I continued along a ridge to the western sub-summit, then made my way carefully down its north face, a sketchy mix of powdery snow and loose rock, to the connecting ridge with V9. I think this face would be similarly unpleasant even when dry. The ridge up to V9 was a pleasant, sunny respite. I had hoped to continue to impressive San Miguel Peak, but the connecting ridge looks loose and complicated. The north side of V9 was more choss and powder, though fortunately less steep than Rolling, and after more careful downclimbing, I finally reached the pass leading to Lake Hope. 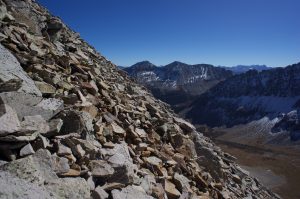 The talus toward 13,300 started out pleasantly solid, then turned loose again higher up; at least it was snow-free. After checking out the summit, I followed some other poor unfortunate soul’s tracks in the intermittent snow along the connecting ridge to Beattie. Now to get home… 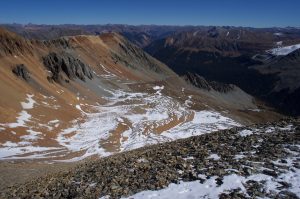 I did not like the look of the southeast ridge, so I continued to the saddle with Fuller, then took off across the rock glacier to the southeast. This was as straightforward and tedious as one would expect. I planned to join the road to Big Three Mine, but ended up heading down through the woods almost straight east toward the parking lot. The terrain was mostly open and friendly, with bits of game trail switchbacking down the slope. After a final bit of steep grass, I emerged on the road near the trailhead, where I set out my chair to read for the rest of the afternoon. 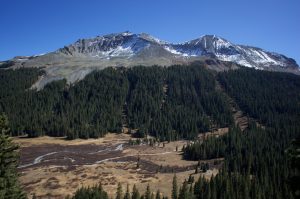 These are the two similarly-high peaks east of the trailhead. I started as before, following the trail south, then turned east when I saw an easy passage through the willows toward the south end of the Sisters. I managed to follow grass most of the way, then slogged up loose stuff to the base of a gully on their southwest corner. There was a strong west wind above the trees, so it was an unpleasantly cold climb up the loose, snowy, shaded gully. When I finally reached the top, I took a few minutes on the sunny east side of the ridge to recover. 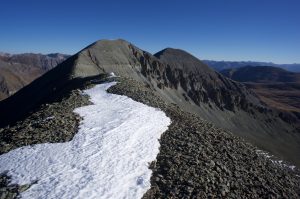 Since the whole massif is loose talus, the only reasonable route is right along the crest. The west wind froze my left eyeball as I stumbled along with all my layers on and both hands balled up in my gloves. A notch between 13,205′ and the southwest Sister gave me an excuse to drop down around the east side, where I took another break to warm up again before continuing to the summit. I found a sheltered spot to peruse the damp register, then added my name. 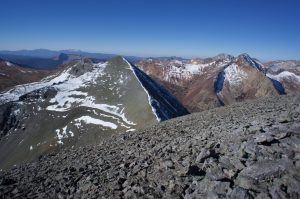 The crest of the north-facing ridge toward the northeast Sister was covered in snow with a crust that either broke through to powder, or was too hard for me to get traction in the wind, so I was forced onto the talus on the east side. Happily, once past the saddle I found a sort-of trail of compacted talus, making the climb to the summit a bit easier. The register contained a number of entries mentioning Hard Rock, though the race doesn’t go over the peak.

I continued down the northeast ridge, finally in more pleasant conditions, looking for the supposed Hard Rock 100 trail. Since it starts out on the other side of the valley, I ended up doing a bit of extra cross-country through the woods before picking it up as it makes a rolling traverse to the southwest. Listening to a podcast and concentrating on my footing in an icy section, I nearly ran into a young man doing the same peaks in the opposite direction. After a brief conversation, I continued down some steep switchbacks, then along the valley floor back to my car, and away from this talus-pit.

NE side of Rolling

Beattie, with Vermillion and Fuller behind