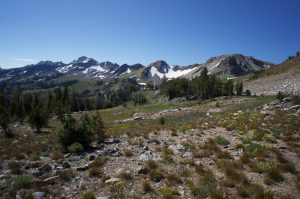 Real Life has been a real headache lately, interfering with peak-bagging plans, but I have managed to get out a bit, experiencing northwest Wyoming during the snow-free late summer for the first time. I normally use the Gros Ventres as a late spring warm-up, as they are both lower and gentler than the neighboring Tetons and Winds. I had tried to tag Gros Peak this spring, only to be turned back by uncooperative snow, bogs, and general misery. With most of the snow gone and the wildflowers out it proved much easier, with the route past Goodwin Lakes involving about 11 miles of mostly gentle terrain each way. 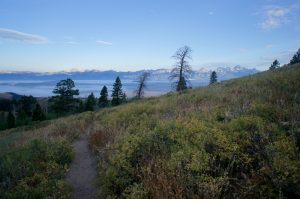 Curtis Canyon is the closest legal camping to Jackson, so the popular Goodwin Lakes trailhead was much more convenient than the Little Granite trailhead I had used in the spring. I followed the popular trail to the lake, then briefly lost it as it circled around the far end, instead following an indistinct boot-path and some open terrain along the base of Jackson’s east ridge. 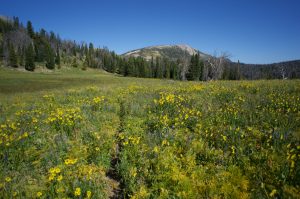 I rejoined the trail near the head of the drainage, then took a side-trip to Jackson’s summit. I had already been there in June a few years ago, but figured I might as well make a minor detour for the morning view of the Tetons. I followed the trail back south, then took off cross-country along the ridge to rejoin the Goodwin Lakes trail as it contours around the head of Flat Creek to meet the Cache-Granite trail. These trails see relatively little use, and are therefore partly overgrown with wildflowers, but they are still easy to follow, and the trail junction signs are all intact. 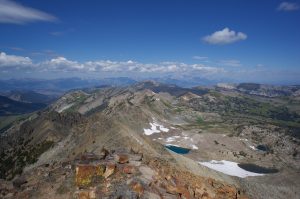 I jogged a bit, but mostly just walked fast on the rolling traverse around to the head of Granite Creek, from which the remainder of the route to Gros is visible to the south. The trail drops down to well-hidden Turquoise Lake, but I left it to head cross-country on a bench leading to Gros’s northeast ridge. I passed east of a large, unnamed, turquoise-colored lake, then found a few cairns as I made my way up the class 2-3 ridge to the northern false summit, passing a tarn nestled a bit above 10,600′.

I found a bit of a use trail along the final summit ridge, and a cairn and benchmark on the summit, but no register. The weather was behaving itself, with the monsoon storms slower to build over the Gros Ventres than their higher neighbors, so I took my time on the summit before retracing my steps, taking advantage of some lingering snowfields to avoid the loose scree. I had the trail to myself up to the turnoff for Jackson Peak, then met a steady stream of hikers heading up as I made my way down past the lake to the car.

Gros from near Jackson