The central northern Pickets are arguably the most remote peaks in the lower 48, so it was only a matter of time before I had to try them. I had visited both ends of the northern Pickets: Challenger in 2014, Luna in 2015, and East Fury in 2016. On this last effort I had been planning to go for more, but I was stopped after a single peak by route-finding errors, a lack of drive, and the realization that I had underestimated my objective. 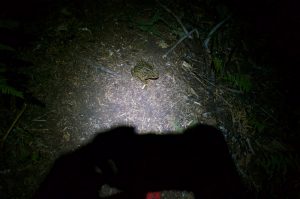 While it is possible to pick off the peaks one-by-one, for the sake of efficiency and style I wanted to nab them all and claim the coveted Northern Pickets Traverse. I had estimated that it would take me 24-30 hours with a shuttle from Hannegan Pass trailhead back to my car at Ross Dam. Unfortunately I was unable to set up a shuttle on short notice, forcing me to either hitch, or use a different route. Not liking my chances of finding a ride first thing in the morning after rolling in late to Hannegan and taking a dirt nap, I used a significantly longer and harder route, descending the cross-country Eiley-Wiley ridge to Beaver Pass, then “running” 20 miles of trail back to my car. This put me at the upper end of my estimated time range. 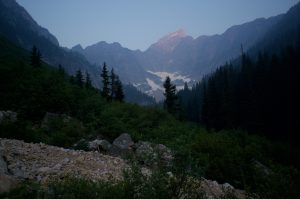 I got a few hours’ sleep at the Ross Dam trailhead, but it is noisy right by the highway, and I was too wired to sleep, so I turned off my midnight alarm, drank my Cup of Sadness fortified with beet nitrates (found at a Walmart full of obese tweakers in Bellingham), and started down the trail around 12:15. The toads seemed more numerous than last year, and I even met a few on the trail down to the dam. It is around 17 miles to where you leave the trail for Access Creek, so this would normally be far too early to start, but I had a good GPX track of the cross-country route from last summer, so I could do it at night without losing too much time. This was key to giving myself as much daylight as possible to deal with the ridge and unknown de-approach. 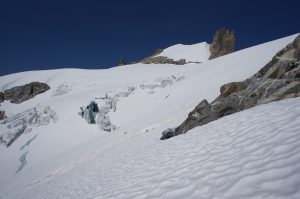 The approach worked about as well as it ever does. I bashed down to the river, where I almost immediately found the remnants of the log bridges I had used in 2014. I wasted only a bit of time dithering (I still hate getting wet), then forded barefoot to try to keep my feet dry and minimize the damage they would suffer in the evening. I found a bit of a boot-pack along the subtle ridge right of the creek that is least brushy. My worst mistake was crossing south one slide path too early, but that did not cost much time. As a result, I reached East Fury’s summit in only 10h15, vs. the 11h30 I took last year. 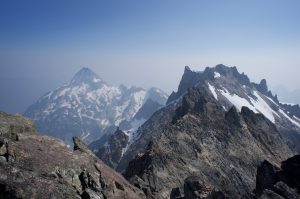 Now it was time to launch into the unknown. The final scramble up East Fury consists of shockingly mobile large talus, and the same continues on the way to West Fury. Beckey’s guide suggests that this traverse takes multiple hours, but I found most of it to be standard chossy 4th class, and reached West Fury in under an hour. The first ascent register was still in good shape, and I was surprised to supposedly be the 19th “party” to visit. 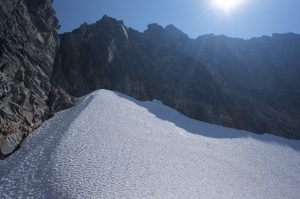 Up to this point, the best exit would be to retrace my steps. Once I headed down the west ridge, things would become more complicated, possibly involving a long and unfamiliar cross-country route around the north end of the range. I steeled myself, then followed the first ascent route down the west ridge. Starting slightly east of the summit, I descended a chute, then made a descending choss-traverse back west to the ridge. I followed that a bit, then made my way down dirty, ledge-y terrain on the other side to gain the small glacier northwest of the peak. From there, I easily kicked my way back across to the saddle with Swiss. 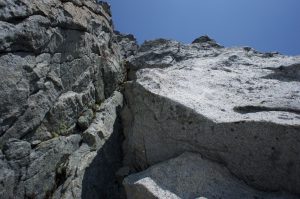 I made my way more or less up and over several small pinnacles of mediocre rock on the way to Swiss, a broad NW-SE summit with a permanent snowfield on its southwest side. I found the rock pleasantly solid, climbing a line on its southwest face and descending near the northwest ridge. I stuffed some snow in my Camelbak, then tossed that out when I found running water below the snowfield. This was a valuable find, as running water is scarce on the rest of the ridge, and it was hot enough to be sweating in shorts and a t-shirt on the crest. 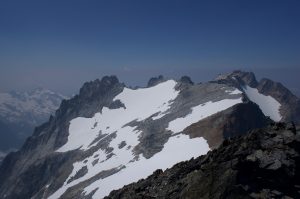 Given the time and my longer-than-desired descent route, I skipped “Spectre Peak” without a second thought, then spent some time considering my route to the saddle with Phantom. The ridge itself looked unusably steep, the gully to its west at least somewhat navigable. Looking back, I think a line just right (east) of the ridge would have been better, blocky low 5th on decent rock. My chute was a garbage-fest with a tricky chockstone, and the traverse back to the ridge was outward-sloping dirt and death-choss. 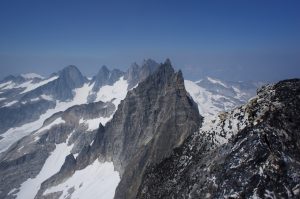 The rock was somewhat less chossy on the way up Phantom, but still not great. I mistakenly climbed a lower summit to the northeast, earning zero bonus points, then found the original register on the true summit. It was in bad shape, and probably not long for this world, being protected by only a bashed-up tin canister and a plastic bag. There appeared to be even fewer entries than on West Fury, but I was concerned enough about my position that I did not pay much attention. Phantom is about one third of the way from West Fury to Challenger, and if things continued apace, I would be lucky to make it off by dark.

The misery continued descending off Phantom, with tricky route-finding on rotten rock on its left to bypass steps in the ridge. Considering the prospect of a bivy or a very long night made me think of efficiency: I turned off my GPS to save batteries for night-time navigation, and skipped the ridge crest whenever I thought it would save me time. As I made my slow way north, I was examining my escape route down the west side and up between two of Challenger’s lower summits. 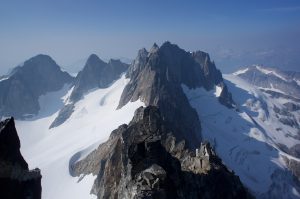 Fortunately things improve considerably at “Ghost,” a subpeak of Crooked Thumb. I could have gone up some line along the south ridge, but Beckey mentions that Roper had climbed an “exposed class 4” route on the west face. Good choice! The rock reminded me a bit of the Tetons’ golden granite, and I had my first fun in awhile romping up steep, solid rock with incut holds.

The ridge from this point looks long, but the climbing remains mostly fun, with the best route generally on or near the ridge, and the descents to the north usually easier than the climbs from the south. Reaching Crooked Thumb, I found quite a bit more traffic in the register than on previous peaks, though still only a party or two per year. 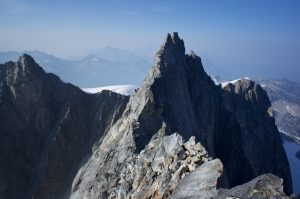 Since I was not rappeling, I had to make a substantial deviation west to reach the first saddle on the way to Challenger. From there, I stayed near the ridge to enjoy the fine, exposed climbing, deliberately not thinking of the grim headlamp time that awaited. Challenger’s summit ridge is a wonderful finale, a series of narrow fins with the holds angled so that the easiest route climbs right along the spine. I let out a whoop of joy, looked around for a summit register, then made the short downclimb to the Challenger Glacier. 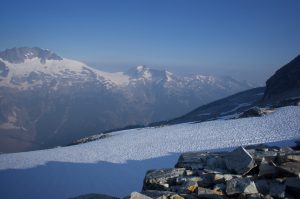 I had three options at this point: exit to Hannegan and hitch (16 trail miles), traverse to Whatcom Pass and take the trail back over Beaver Pass (25-30 trail miles?), or descend Eiley Ridge directly to the pass (20 trail miles). Given the time, I should have sucked it up and chosen the second, but I optimistically and foolishly took the new-to-me Eiley Ridge descent. Things started out great, with a nice hogsback of snow providing a clear path around the yawning summit crevasses, and easy jogging on the lower glacier to Challenger Arm.

I climbed Point 7374′, then was forced to sketch my way down a dirt-chute to the snowfield on its northeast side. I got more water at a tarn near frozen Wiley Lake, then continued making good time on snowfields south of the ridge to Eiley Lake. So far, so good — I thought I would be near the final bushwhack down to Beaver Pass by headlamp time. 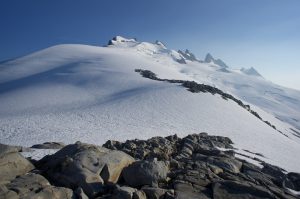 Unfortunately I made a mistake here, straying too far southeast of the ridge. There are several places where it is temptingly easy to descend directly east here, but they lead to Luna Creek, which is supposedly one of the worst places in the world. When I realized what had happened, I tried to fight though some scrub pines back toward the ridge, then tried side-hilling across steep grass and flowers to rejoin the ridge. Unfortunately the ridge rises again; maybe the correct route goes over Point 4984′, but I have no idea, and that was not an option for me now.

Before it got dark, I had programmed my GPS with a point a bit south of the pass, so I turned it on, turned on my headlamp, and continued via IFR. My strategy was to traverse until the point was directly down-slope, then bash my way toward it. I found plenty of wretched scrub, blueberries, and alder, but also some surprisingly open groves of big trees. Unfortunately all of it was steep and slick, but I suppose sliding on your butt is an efficient way to lose elevation. 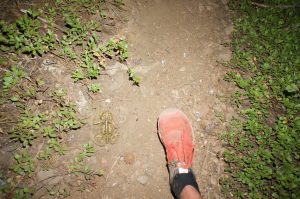 There was much less devil’s club than I expected when I finally reached the valley bottom, but I reached my random point without hitting the trail. I did my best to bash due east, and almost fell as I stumbled out onto the trail. At the first stream that seemed safe-ish to drink, I got some water, downed a couple ibuprofen, rinsed my feet, and switched to my dry socks. My calluses were all white, soft, and wrinkled, so I knew my feet were in for a beating, but I hoped that the clean (and thinner) socks would reduce the suffering. 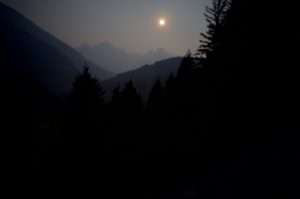 On a normal outing, this return would take about 4.5 hours, 3 to Ross Lake and 1.5 back to the dam. I started off at a reasonable jog, but realized shortly after Luna Camp that it would not last. I could motivate myself to jog with a mixture of Rammstein and reminders that the more I jogged the sooner it would be over, but it was a pathetic shuffle. As I neared the lake, I tripped more often, and was worried I might face-plant into one of the toads, which are even more disturbing after 3 hours’ sleep and 27 hours on the move. I could probably have gone to sleep curled up on the trail, but I wanted to do this in a single push, and did not want to be woken by a ranger’s boot or the splat of a toad to the face. I took in the moonset while crossing Ross Dam, and for once was grateful to be finishing in evening headlamp time — at least it wasn’t quite dawn.

Traverse from near Luna

How is this standing?