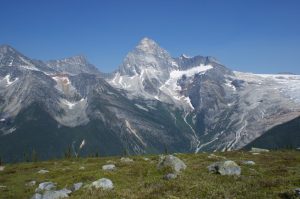 Mount Sir Donald is the jewel of Rogers Pass, a quartzite wedge whose northwest ridge rises 2300 feet from the saddle with Mount Uto. I had first climbed it in 2014, approaching via the long traverse from Avalanche Mountain, and it remains one of the best routes I have climbed anywhere. It would be a shame not to climb it while I was in the area, and I figured I might as well try for speed.

I drove up to the trailhead early, packed my pack — two packs of pop-tarts, 1 liter of water, windbreaker, bear spray — then waited for it to warm up a bit before starting around 7:45. The Sir Donald trail is not optimal for gaining elevation, starting out flat along the Illecillewaet River before climbing nearly straight up toward the Uto-Sir Donald saddle, and I was still feeling a bit sore, so I only managed about 3200 ft/hr on the climb to the saddle. A better runner could probably get closer to 4000 ft/hr.

I was slowed a bit by a tricky crossing of the Vaux Glacier’s outflow stream on slick rocks, then got a bit off-route between the camping area and the ridge. There are multiple, confusing use trails of various quality here; the fastest route probably starts heading up just before the green outhouse. I passed an off-route couple on their way to Uto, scrabbled up some moraine, and rejoined a clearer trail where it crosses a ledge below the saddle.

I reached the saddle in 1h22, where a short boulder-hop leads to the base of the day’s technical climbing. Though there were no tents at the campground, I passed three parties on the ridge, one simul-climbing lower down, and two just below the summit. The climbing was as I remembered, with positive holds and clean rock along the crest, and chossier ground to the left. The best route stays close to the ridge, deviating left or (surprisingly) right to get around a few vertical steps. I reached the summit in 2h24m45 from the trailhead, having taken about 1h02 for the ridge, a substantial improvement over the 1h20 or 1h30 it had taken me in 2014.

I had mixed feelings about the round-trip FKT, partly because the view from Sir Donald’s summit is worth savoring, and partly because speed-downclimbing the northwest ridge feels risky. I spent about 10 minutes on top, eating my last pop-tarts and flipping through the register, then started back down at a steady pace. There is some sort of bypass near the top, but I just reversed the ridge. I remembered losing time on the chossy ground to either side of the ridge last time, and deliberately stayed near the crest, resisting the temptation to take easier-looking ledges to either side.

Back at the saddle, I was surprised to see that I had taken only about 1h10 descending, and was inspired to put in some effort on the run down. The trail is also sub-optimal for descending, with quite a bit of tricky running over boulders and hard-packed dirt. I scared a ranger and a couple of backpackers, then motored through the flatter section in the woods, making some noise to give the bears a few seconds’ warning as I came around the blind turns. I had expected to take about 5 hours round-trip, so I was pleased to return to the Wheeler Hut in only 4h38. This time could definitely be improved with better fitness, less enjoying the summit, and slightly better route-finding. However, I don’t think carrying a light cord to rap the ridge would be faster overall.