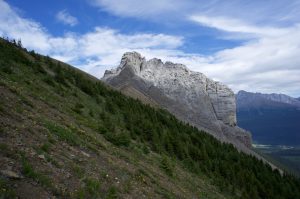 [Some photos, including those containing the author, by Bob. — ed.]

Mount Smuts is the hardest climb in Alan Kane’s popular Rockies guidebook, a sometimes-exposed scramble with a few low-5th-class crux sections near the south end of the Spray Lakes valley. The Fist is another somewhat-popular scramble to its east. Having become accustomed to climbing choss, I was reminded how pleasant it can be to climb solid, super-sticky rock on Smuts. The nearby Fist turned out to be a choss-pile, but still better than many of my recent peaks. 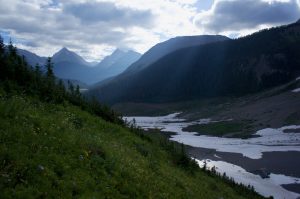 I had met Bob on my first trip to the Canadian Rockies, and he got back in touch when he saw that I would be in the area. Since he is based in Calgary and has a Real Life, he is not up for long suffer-fests in the far north, but gets out a lot in the Canmore region. After meeting up in town, we rattled down the miserable washboard of the Spray Lakes Road, inexplicably both unpaved and open year-round, then slept at the Smuts Lake trailhead (“day use only!”), where Bob learned that his manly new truck was too short in any direction to comfortably lie down. 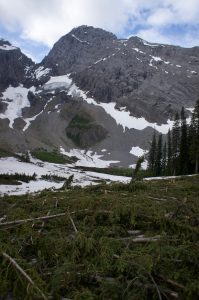 We got an early start by Canadian standards, along with two fishermen and a fast-looking runner guy, all of whom had bikes and soon left us behind on the initial rideable 3k. Beyond there, the trail becomes rooty as it turns to climb along Commonwealth Creek. Emerging in meadows below the north face of Mount Birdwood, it has been obliterated by two large avalanches over the past winter, buried under a layer of compacted snow and downed trees pointing in the same direction. I found the trail again after the first, then lost it at the second, cutting through woods toward the Birdwood-Smuts col hoping to find it. The thrashing became steadily steeper and denser, until I gave up and made a straight line to the edge of the woods, where I stumbled onto the trail, right where it would make sense for it to have been. Duh. 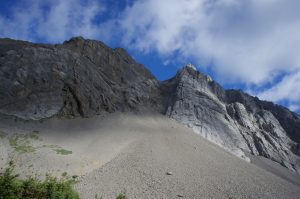 The trail climbs steeply along the woods’ margin, emerging in alpine meadows below the pass. The route up Smuts’ south ridge starts in a gully to the north, above a large but fairly stable talus fan. Heading straight for the gully, we found bits of use trail, then transitioned onto solid slabs on its right-hand side. The rock bedding is more or less vertical on this part of Smuts, oriented to the north-northwest just across the ridge, so when it is clear of debris, it forms easy ramps with handrails. This allowed us to gain several hundred meters quickly, reaching a shoulder where the west side becomes sheer and we were forced onto the crest. 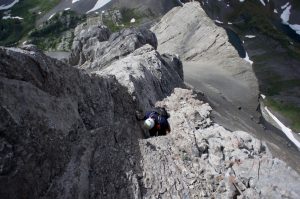 Where the crest steepens, we made an exposed step right into a sloping chimney. The rock is incredibly sticky, so I easily stemmed my way up, dislodging a rock in a failed attempt to kill my partner, who defended himself adeptly with his helmet. Above the chimney, the climbing continued in similar fashion over a couple more steps: move right to a chimney formed by an eroded layer, stem up back toward the ridge. With a final, exposed walk along the crest, we reached the summit in around 3.5 hours. The runner had signed the register earlier, speculating that sub-2-hours should be possible for someone going hard who knew the route (I agree). 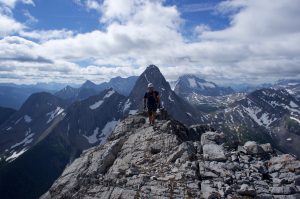 We had expansive views in all directions, cut off by a cloud deck a bit above 10,000′, so Sir Douglas and King George to the southwest, and conical Assiniboine to the north, were all truncated. Nearby Birdwood’s north ridge (5.5) looked long and enticing, but we still had to get off this thing. The standard descent head down the northwest ridge for a bit, then turns down a horrible garbage-chute of a gully to reach ledges and scree on the west face. We took turns down this gully, moving from one sheltered ledge to the next one at a time unleashing showers of debris. If I were to climb the peak again, I would downclimb the south ridge, and maybe try going up the northeast ridge, which looks like it should go. 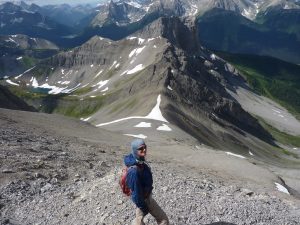 With plenty of daylight left, we decided to climb the nearby Fist as well. The direct route across Smuts’ north face is blocked by cliffs, so we had to go the long way around. We picked up a faint return trail descending across talus to the Smuts-Birdwood col, passing above the two fishermen we had met earlier, then descended the east side of the pass a bit to pick up a use trail around a buttress on Smuts’ east side. 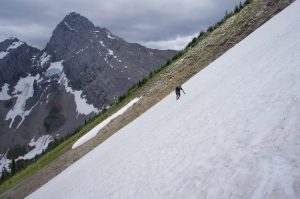 Once past the toe of the buttress, we began a long, ascending, unpleasant sidehill toward the Fist. The face is a mixture of woods, turf, and scree, cut by several gullies. The gullies are worst when dry, when their sides are slippery hard-packed dirt. We crossed one in this condition, then a couple more still filled with snow, carefully stone-tooling our way across. Finally reaching the crest, it took my ankles a few steps to adjust to being on level ground. 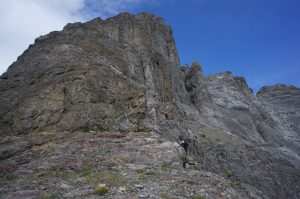 The route up the Fist is not elegant, but at least it is obvious: climb a chute right of the summit, then turn right up another chute with a short vertical step at its base. We went one at a time both up and down, as it is impossible not to unleash death on those below. On the summit, we watched the crowds hiking the popular Tent Ridge trail, waiting for a couple of climbers we had seen behind us to top out. It would go ill for them if we descended while they were climbing.

When they failed to appear, we downclimbed one at a time, to find them sheltering in place at the base of the chute. It would have been quickest to drop down scree to Commonwealth Creek, but I had noticed a faint trail toward Tent Ridge on the way up, so we followed that north instead, seeing some new terrain and meeting a few hikers on the way around and down the ridge. There are a few confusing trail junctions in the woods below, and many blowdowns, but fortunately Bob had a map on his phone, so we made the correct turns and emerged on the Shark road just above our trailhead.