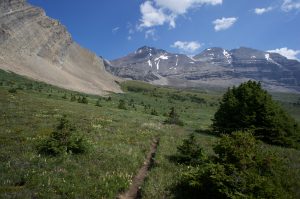 Mount Willingdon is one of the lesser Rockies 11ers, barely over 11,000′ and lying on the dry side of the range, east of the Icefields Parkway just north of Lake Louise. It is also somewhat remote, lying on the far side of a broad alpine valley at the head of the Siffleur, Clearwater, and Pipestone Rivers, separated by a high ridge from the Bow River valley and the road. There are long horse trails up each river, but a more direct route that ascends Mosquito Creek, then crosses rugged Quartzite Col, makes Willingdon a reasonable dayhike. 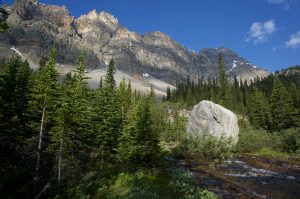 Despite a questionable forecast, I got my usual non-alpine start, hopping the guard rail to follow the Mosquito Creek trail. Thanks to a helpful trip report, I knew where to look for the climbers’ trail to Quartzite Col, and had no trouble finding and following a sometimes faint but well-flagged path up the west side of the north branch of Mosquito Creek. I eventually rock-hopped across some braided side-streams, then crossed at a convenient log, where the trail continued on the other side. 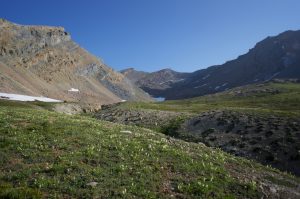 The trail and flagging disappear near a side-stream, and I continued cross-country up its north side on open ground, soon emerging in the alpine below Quartzite Col. Taking a direct line to what looked like the low point, I climbed turf and dirt, then crossed a field of large quartzite (?) boulders infested with talus-spiders. While I did not find a supposed plaque, I did find a cairn at the crest, as well as an old boot-pack on the other side’s snowfield. The snow looked unpleasantly steep to handle in running-shoe crampons, so I instead carefully descended some dirty ledges to the south, disturbing a mountain goat, before gaining the snowfield lower down. 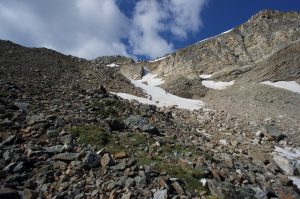 Coming around a corner, I saw two men putting on crampons to climb to the col. I had to self-arrest once as I sketched down the snow in running shoes, but I don’t think they saw that bit of foolishness. They were returning from a 5-day backpack to tag Willingdon and nearby Recondite, and one seemed slightly disapproving of my solo-dayhike tactics. With a bit more talus-hopping, I finally reached the high grassy plain, with Willingdon still discouragingly far away to the east. 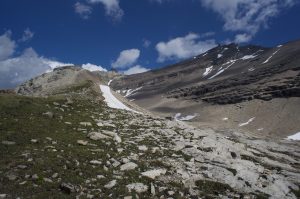 The plain is probably boggy early in the season, but it was mostly dry, springy ground as I made my way over some ups and downs to eventually reach the Clearwater Pass trail, a well-beaten-in pack trench. I followed it to the first Devon Lake, then took off across grass and flowers toward Willingdon’s west ridge. The ridge is mostly well-behaved talus, with a faint boot-track most of the way. There is one short, tricky downclimb on some white rock where the ridge turns, then a final 6-foot step on outward-sloping and gravel-covered rock below the summit plateau. The step had a decent hand-line, making things much simpler. 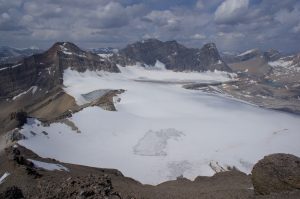 I had been uneasily eyeing clouds and showers to the south and west for awhile, and I felt a few snowflakes on the summit, but it remained sunny, and looked like it was clearing. Still, I didn’t want to take the extra time to traverse Willingdon’s southern sub-summits. I flipped through the register, took in views of the steep east face and the impressively flat glacier sheltered by the Willingdon-Clearwater cirque, then retraced my route. 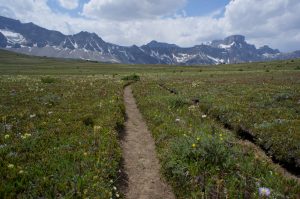 I was enjoying myself on the trip back across Clearwater Pass, in no particular hurry, when the weather abruptly turned. I tried to beat the showers to Quartzite Col, but the rain caught me near its base, punishing my late start. Fortunately, after a bit of thunder, things settled into a cold, steady drizzle. I cramponed up the snow this time, then tried to minimize boulder-hopping on the other side, since the wet lichen-encrusted quartzite was quite slick.

The cold rain continued across the alpine and down to near the log crossing, and the brush-soaking continued until I reached the official trail, leaving me about as wet as I could be. I stripped off my “rain jacket,” which apparently needs a fresh DWR treatment, then clumsily put on my sort-of-dry hoodie with stiff hands before squelching down to the trailhead. After a slow, fumbling change into dry clothes, I blasted the heater on my drive back to town, and was mostly back to normal by the time I reached Lake Louise.