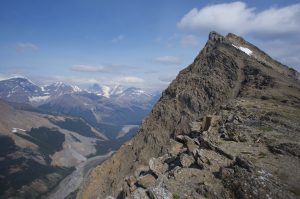 After a maintenance and recovery day, conditions deteriorated dramatically in the Jasper area. The smoke was back with a vengeance, and it turned cold by mid-morning, with rain in the valley and a dusting of snow on the peaks. It was more of the same on the drive down to the Athabasca Glacier, so I checked out the museum (cool historic photos), walked the tourist trail to the base of the glacier, then scouted out the Sunwapta River crossing for Kitchener before turning in. 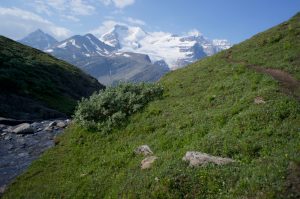 It was mostly clear in the morning, but unpleasantly cold in the lot at the toe of the glacier, so I chickened out on the early morning ford, taking my time over coffee before checking out the scenery from lowly Mount Wilcox across the way. There is supposed to be a trail leading toward the peak from the visitor center, but I did not find it, and drove up to the popular Wilcox Pass trailhead instead. The trail leaves the road to follow the original pack trail route from Lake Louise to Jasper, which crossed a broad alpine pass east of the Sunwapta River to avoid a section of narrow canyon, rejoining the current route near Tangle Creek. 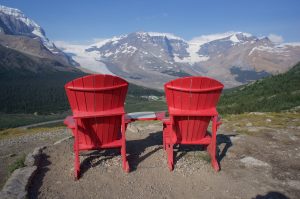 Despite my lazy start, I had the trail to myself as I climbed out of the woods, passing a couple of the “Canada 150” red chairs. The trail gradually gains elevation through a wide alpine valley, with spectacular views of the Columbia Icefield peaks from Athabasca to Kitchener. The previous day’s showers had left an odd dusting of snow on the peaks, with none visible on the high Icefield peaks or Wilcox, but a fairly heavy dusting on neighboring Nigel. 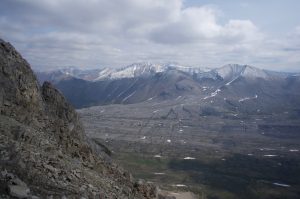 I left the main trail sooner than I should have on what seemed like a direct use trail; the best route follows the official trail to “Wilcox Ridge.” I could see the trail up the peak ascending its east face, and as I climbed, various faint paths converged in a single, well-cairned route. The first part of the climb is a pleasant walk on dirt, heather, and well-behaved scree, as the trail climbs to the peak’s south ridge, from which one can see the highway a couple thousand feet below. 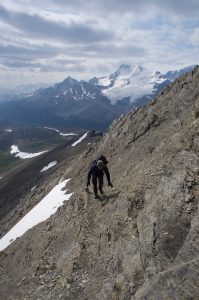 The trail is more intermittent along the ridge, with the occasional bit of easy scrambling. I had seen someone ahead of me from lower down, and met my fellow climber as he was stymied by a rock fin. He turned out to be a young German man named Christian, carrying an insane quantity of camera gear and in a bit over his head on the climb. He asked if he could join me, and we continued together through some scrambling, which eased again toward the summit. 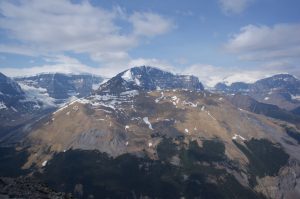 At less than 10 miles round-trip and 3000 feet of elevation gain, Wilcox is a high value-for-effort peak. To its west, one can see peaks from Athabasca north to Woolley, and the summit is just high enough to see onto the surface of the Icefield. To the east are meadows and lower peaks made of undulating layered rock. While Christian made use of his impressive camera gear (I was especially jealous of the 15-70mm telephoto lens), I took a few photos, then sat around getting chilled.

We descended together through the scrambling section, passing a lone Canadian on his way up, then I took off, occasionally jogging but not in any hurry. I passed a hundred or more hikers on the way down, more the crowd I expected, then returned to the visitor center to hang out and watch the smoke blow in.