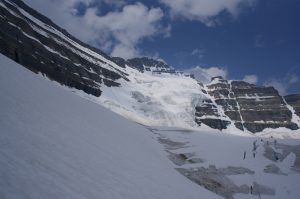 Whitehorn is, by a hair, the northernmost 11er in the Canadian Rockies. However, Mount Robson towers 1500 feet higher across the valley, so Whitehorn sees relatively little attention. The classic route follows the west ridge, with a long approach circling all the way around the mountain counter-clockwise from the Berg Lake trailhead. I chose the similarly-difficult south ridge because it has shorter approaches, following the trail for 6-7 miles before ascending either to the Whitehorn Glacier, or to a valley to its south. I went up the latter and down the former, and found both to be rugged and little-used. 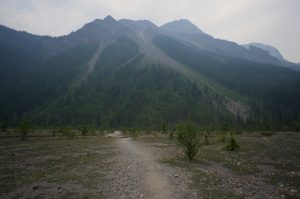 Since I was doing a ridge route, I got a lazy start a bit before 6:00 (PDT) with my usual lightweight mountaineering gear, making the miles of well-graded trail past Kinney Lake much more pleasant than in boots. The day was looking predictably and depressingly smoky, and Robson’s ice-capped summit was hidden in a small cloud, but the weather looked reasonable for what I was attempting. The guidebook made the glacier approach sound less reliable, so I opted for the glacier-free southwest ridge approach, leaving the trail at a talus slope a bit more than 9 km in. 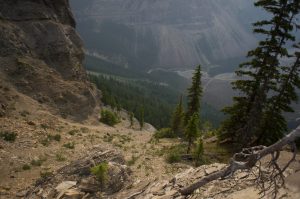 The route immediately started to suck in numerous ways. First, I climbed up almost 1000 feet of loose scree and hard-packed dirt. I was aiming for the mouth of a hanging valley south of some cliffs, so at some point I dove into the woods, trying to follow faint game trails and open areas up and left. I believe I was “on route,” as I eventually found a scary, exposed dirt ledge that led, after a bit more bush-whacking, to the desired valley, where I found a lone, useless cairn. 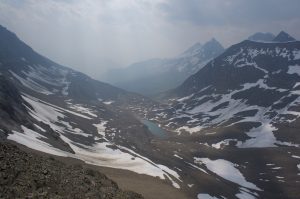 I stayed mostly on the north side of the valley as I climbed west, side-hilling on a mix of turf and talus. I passed a large piece of old avalanche snow, then continued along a stream toward the alpine. The mosquitoes and black flies were out in force, often making it possible to kill more than one with a single swat, but as long as I kept moving, they were bearable. 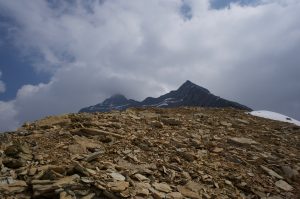 I eventually turned north, crossing some rolling terrain to a milky lake in a large talus-bowl, where the bugs at last relented. The route gains the southwest ridge north of a sharp fin, via a mixture of choss, rotten steps, and a couple of snow patches soft enough not to need crampons. The climb to the junction with the southeast ridge is similar, mixing talus-walking with route-finding through crumbly cliff bands. 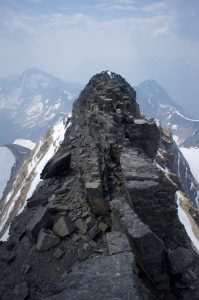 At the ridge junction I finally got a reprieve, as narrow but nearly-flat ridge is topped by long sections of exposed sidewalk. The final climb, however, is the choss of nightmares, blobs of outward-sloping garbage flaking off in dinner-plates. At one point I gently bumped my head on an overhang, and a chunk fell off and hit me back. The guide calls it 5.3, but YDS ratings make no sense to me on such terrain; it’s all sketchy. 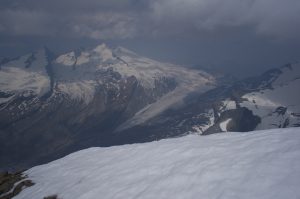 The smoke seemed to be thinning, and I had reasonably clear views of Mount Longstaff and the large Swiftcurrent Glacier to the west, and almost all of Robson to the east. There was no sign of any recent visitors. I hung out on the slightly chilly summit for awhile, then sketched my way back down to the ridge junction. The glacier looked pretty tame, so I decided to try that route on the way out. The southeast ridge was steeper and more rotten than the southwest, so I got on some snow to the right as soon as I could, plunge-stepping down to a saddle at the top of the glacier. 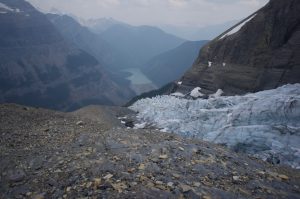 While there are some large crevasse-fields, there was a pretty clear route down to the low-angle part, where I made my way to the northeast edge. There turned out to be a long tongue extending from the south side down to about 6500 feet, not visible from above, and I spent some time descending on more- and less-pleasant rock to get around it. Below, I found the route much as described, with some difficulty and an old piton in a black cliff-band. Below, I crossed the glacier’s outflow streams on generally pleasant scree and gravel, aiming for the south side of a gash they had carved in the lower cliffs. 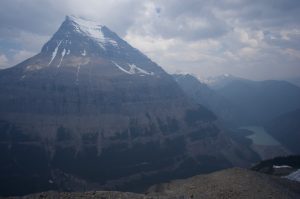 Here I finally found more consistent cairns, though no discernible use trail or even game trail. I would have been reluctant to descend this way if I did not know that there was a path, as it looks from above as if it will cliff out in several places. But there are just enough breaks in the cliff bands, and I soon found myself on a small trail near the Whitehorn ranger cabin, which joins the main trail next to a fun-looking suspension bridge. I jogged the downhills and flats on the way back, picking up my pace a bit when I realized I could make it back in under 12 hours. I had optimistically planned to do Robson the next day, but I felt sufficiently beaten-up to deserve an easy day.