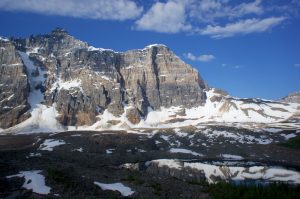 Deltaform is the highest of the chossy line of peaks on the south side of the Valley of the Ten Peaks near Lake Louise; Neptuak, to its west, is in the way. It is one of the more technical Canadian Rockies 11ers, requiring a few 5.5 moves crossing a gap between the false and true summits, and a fair bit of 4th and low 5th class scrambling to get there. I had originally planned to do this with an early start and big boots, but wisely switched to a lazy start and trail runners. I still foolishly took my crampons and axe for a walk, though. 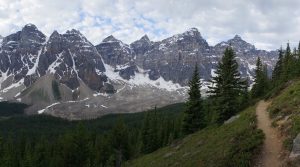 The bear-related party size was merely recommended instead of required, so I didn’t need to keep an eye out for rangers as I made my way up the well-used Sentinel Pass (Mount Temple) trail, passing groups of various sizes. The traffic decreased after I turned off toward Eiffel Lake, though I passed a woman returning from an early-morning run. There was still snow on the trail where it crosses a few avalanche paths, but it was mostly snow-free past the lake. Above that, it was half covered in slushy snow, so I followed the path of least resistance to the pass. 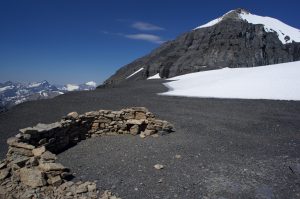 From the pass, Neptuak’s west ridge starts out as undulating rubble before the north side steepens near a step in the spine. A bit of low 5th class climbing on the south side leads back to the ridge above, and a couple of rap stations. Not having done any real scrambling in awhile, I was rusty and awkward making my meandering way up the blocky terrain. After a long talus slope, the remainder of the ridge consists of several steps mixed with easy walking. Sometimes it is necessary to go south around the steps, but it is generally best to stay on the crest to minimize awful side-hilling. 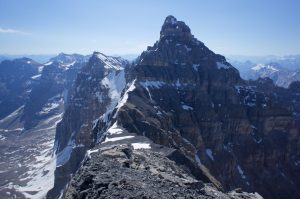 Reaching Neptuak’s rubbly knob of a summit, I found a register showing a few parties per year climbing this peak, mostly on the way to Deltaform, which looks scary up close. The last person to summit had stuck an advertisement for his business to the register; I peeled it off and signed my name in its place.

Getting off Neptuak was probably the worst part of the day. After downclimbing disintegrating black rubble covered in marbles, you sidehill wretchedly around the south side on more rubble and dinner-plate shale to reach a surprisingly broad and flat saddle with a substantial windbreak. Though the rock on Deltaform’s west ridge is not great, it is much better than Neptuak’s. The best line stays on or just right of the crest most of the way, sometimes with wild exposure on the vertical north face to the left. The climbing is mostly class 2-3, mixed with steps of class 4-5 on enjoyably sharp-edged rock. 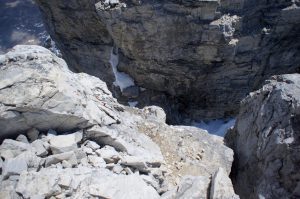 I found the summit gap just as maddeningly spiteful as previous summiters. On the west side, I made a couple face-y moves to a ledge, from which I could step across to a large boulder, then down a chimney to the south (removing my pack), and across to the other side. The climb back the summit consists of a rightward-trending series of ledges, with tricky balance and small handholds in a couple of places. It felt legitimately 5.5, and I was not super-happy about having to downclimb it. 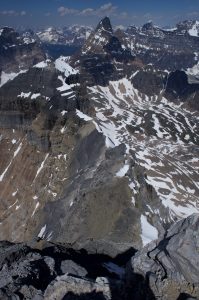 I admired the views for a few minutes, and tried to pick out people on the clearly visible trail up Temple’s southwest ridge. I had plenty of time to hang out, but headed down after only a few minutes, feeling something like the first ascent party: “Although we had been successful in conquering what is doubtless one of the most difficult mountains on the American continent, no word of mutual congratulation was spoken. Our position was far too serious to permit any feeling of exultation.” 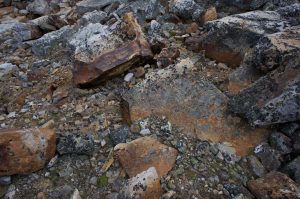 Fortunately the gap felt easier to cross in the return direction. The climb down the ridge was not too hard, though it involved some backtracking when I forgot how I had climbed or bypassed some of the steps. I passed a few other groups jogging down past Eiffel Lake, and more once back on the main trail, including a Slavic woman running down the switchbacks in jean shorts. She was making good time, so I congratulated her when I ran into her in the parking lot crowd. She clearly did not appreciate the attention from the unwashed American, so I quickly abandoned any attempted conversation.