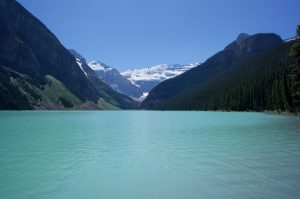 Victoria is the long, glacier-clad peak visible from Lake Louise, with Lefroy mirroring it across Abbot Pass. Since the standard routes both start from the pass, it makes sense to do these peaks together. I had planned a more ambitious and elegant route, traversing across North Victoria, but the ridge between South (main) and North Victoria looked horrible, and the descent off the latter looked like a mixture of sketchy (downclimbing choss under a big cornice) and misery (postholing across a glacier). 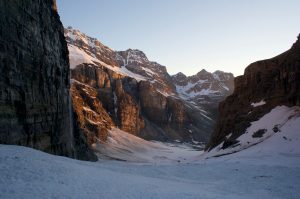 I had hoped to do something in the Lake Louise area the day after Joffre, but it was 10:00 PM by the time I got settled in, too late for the early start needed for a legitimate climb in the area. Instead, I slept in and ran up past the tea house to look at the “Death Trap” and Fuhrer Ledges routes to Abbot Pass. The latter looked like a heaping helping of suck, so Death Trap it would be… which meant a stupid-early start to scamper under the hanging Victoria Glacier. I dodged tourists on the way back to the trailhead, set my alarm for 3:00, and read for awhile before trying to get a reasonable amount of sleep. 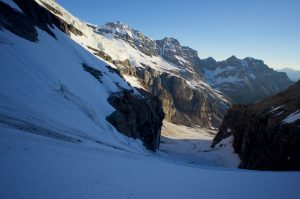 I drove up to Lake Louise and was on the trail by 3:30, clomping toward the tea house in mountain boots. I left the trail before the switchbacks, following an old trail and one of the area’s many social trails for awhile before choosing a plausible line down the lateral moraine. There doesn’t seem to be a use trail down to the glacier — apparently not many people approach Abbot Pass from this side. 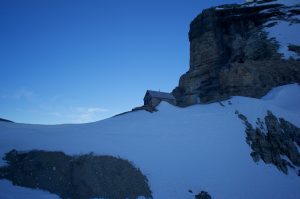 First light was hitting the icefall as I entered the Death Trap, booting easily up the crunchy snow. In addition to many smaller slides, there was evidence of a huge avalanche awhile ago that ran nearly the whole length of the snowfield. For most of the climb, I could stay near the center of the canyon, safely out of the likely path of any rocks or ice. Near the top, I went right to cross a large crevasse where it was bridged by slides from Victoria, then angled back left to join the boot-pack from the hut to Lefroy. 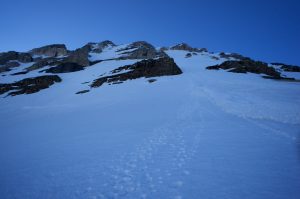 The standard Lefroy route follows the right-most of three gullies on its west face. Untrodden snow was obnoxious, with a breakable crust over sugar, but fortunately previous parties had installed a nice staircase, and the stairs were pleasantly firm. As I started up, I saw a party already descending, which turned out to be a friendly guide with two utterly novice clients on a leash as they tripped and stumbled down the boot-pack (walking downhill in crampons can be tricky). 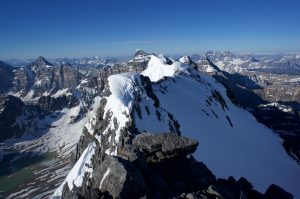 I thought I had the mountain to myself, but I soon heard a call of “rock”, and looked up in time to dodge two small rocks as they whizzed down the slope. While the rock on the summit ridge is good, there is a lot of loose debris at the top of the couloir, and it is almost impossible not to knock some off, especially wearing crampons. I soon met the rock-chucker, a friendly guy from Canmore who seemed impressed by my time from Lake Louise. He asked my name, expecting that I would be someone of note. 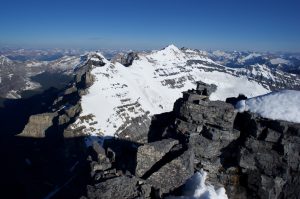 I topped out to views of big air down Lefroy’s east face, with Mount Temple rising proudly across the valley. There is a final, short scramble across a couple of false summits, made trickier by the snow and by wearing crampons. I found no summit register, and stayed for only a few minutes before heading back down. As I always do when I pass a hut, I peeked inside the Abbot Pass hut for a few minutes. It is surprisingly luxurious, with a wood stove in the sitting/dining area, propane burners in the kitchen, and a resident caretaker. I talked to the other climbers a bit, took some snowmelt water, then continued up Victoria’s long south ridge. 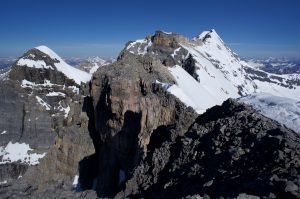 The climb started out utterly wretched, wandering up outward-sloping, debris-strewn ledges mixed with patches of melting, dripping slush. Fortunately, after the initial climb from the hut, the rock becomes almost well-behaved. Once it has completely melted off, the route has been described as “fancy walking.” It was a bit trickier for me, but there were still long stretches where the snow had melted back far enough on the west side to expose 1-2 feet of almost sidewalk. The snow on the east face was soft and sometimes knee-deep, but I could usually find a path on or west of the crest where it was easy to kick steps. 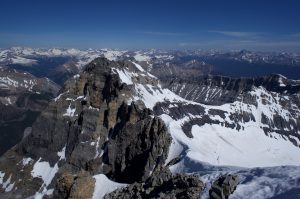 While the ridge was not difficult, it is long, taking about two hours from hut to summit. This wore at my motivation, and looking north from the summit, I felt I had had enough. The ridge between the south and north summits turns suddenly nastier, a jagged mix of snow aretes and choss pinnacles. While the north peak’s north ridge looked straightforward, the descent from there looked like sketchiness followed by slogging. 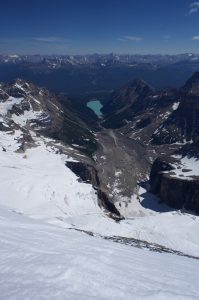 Instead I returned to the hut, taking about 1h45, then chatted some more before dashing down the death trap. The snow was perfect for boot-skiing and plunge-stepping, and I was through the thing in less than 30 minutes without any debris encounters. I chose a different, equally miserable path up the moraine, reaching the tourist trail to find a group of Canadians smoking and watching my progress. From there, it was an hour and change of dodging tourists back to the car, for what was just under a 12-hour day. Driving back into town, I found that the power had been out since noon, and would remain so for the rest of the evening. Town was useless — back to camp.