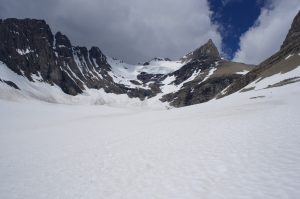 Mount King George, only slightly farther north than Harrison, seems to be in a wetter part of the range, making it home to a rapidly-shrinking south-facing glacier. The route starts at an easily-missed cairn along yet another logging road, crosses a river on a sketchy log, then follows an old trail endlessly along the valley bottom before climbing straight into the alpine. I underestimated this peak, and it nearly got the better of me, as I almost downgraded productive peak-bagging to a pointless walk to a glacier. I got it done though, with a loop up the southeast ridge and down the south glacier taking 11 hours with suboptimal early-season conditions and some dithering. 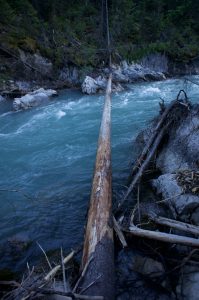 Daylight seems lopsided, so I got a lazy start around 7:30, hiking a few minutes down to the river for a ‘nad-flattening a cheval log crossing. I am normally comfortable balance-beaming these things, but the river looked threatening, the log was long, and it had been polished smooth by many crotches. Once on the other side, I crunched through an old clear-cut, then bashed through the woods until I found the old trail on the other side near Fynn Creek. Many logs crossing the trail had been cut at least a decade ago, and between those and recent flagging, the trail was easy to follow along the flat valley bottom. I saw some old bear scat, and more recent moose tracks, but encountered no wildlife for the whole day. 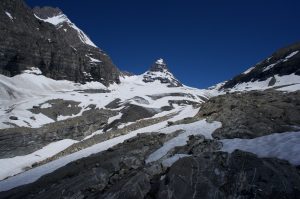 At the head of the valley, the trail turns directly uphill to get above some cliffs. The first part is covered with downed trees and difficult to follow, but it soon finds an open ridge, heading straight up to near treeline. Emerging from the trees on a large morainal flat below the King George Glacier, I was unsure where I should go, and started up the glacier toward Mount Prince Albert, which looks like a smaller Assiniboine from this angle. 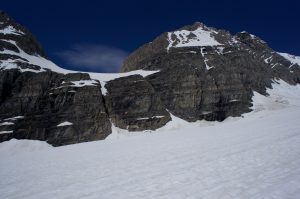 A lot of the glacier was covered in miserable calf-deep slush, and I was thinking of turning around and calling it a day when I recognized the start of the southeast ridge route, two parallel breaks in the cliffs between King George and Princess Mary. I almost turned around again, as I was not feeling too enthusiastic, and the access couloirs were both partly melted out to the underlying wet choss. I went up the right (wrong) couloir a bit, sat on a ledge for a bit, then decided to explore. 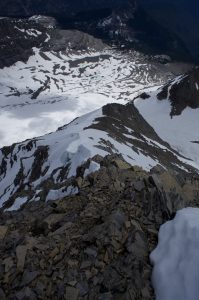 I edged south, then found that with a couple steep moves on incut holds, I could start up a smaller cleft between the two main chutes. From there, I traversed and found class 3-4 breaks in the small cliff-bands, and was soon back on snow near the Mary-George saddle. More importantly, the route-finding adventure had restored my enthusiasm, and I unhesitatingly started up the broad ridge. The route is rated 5.3, but all I found was a class 2-3 mix of turf and mildly obnoxious scree. So far, so good. 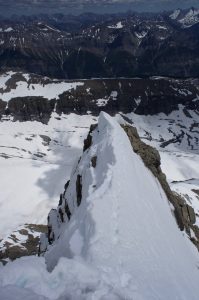 It is still early in the short Canadian climbing season, and things started to suck on the upper ridge, which was partly covered in deep slush. This started out tedious, then turned threatening, as I crossed one sketchy-looking snow arete, then carefully wallowed west of a cornice. At a third snow “feature”, after passing a couple old pitons, I had to downclimb a bit onto the west face and up a gully. The route is not quite in condition, making it somewhat harder than its nominal 5.3. 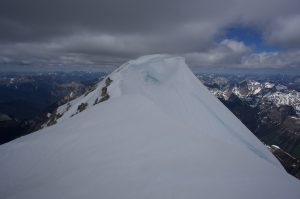 Where the ridge flattens out and joins the standard south glacier route, things got easier, if somewhat tedious. The route description mentions a bergschrund crossing, but I had continuous snow all the way to the massive summit cornice. I tagged a summit-ish point safely away from the overhang, then retreated down the south glacier, glissading in a couple places to avoid postholing. After some easy side-hilling, I scree-skied down to the lower snowfield, which was mostly more pleasant than the King George Glacier. Near the Mary-George saddle, I saw a cornice collapse across the way, sending a healthy spray of rock and snow down toward the lower snowfield.

Thinking I was done, I wrung out my socks by a stream, and replaced the cup of old gas station water I had left with a couple liters of fresh glacier melt. I thought I was done, but there was one more tricky bit of route-finding through a cliff band on the return to the King George moraine. I mostly had no trouble following the trail on the way down, only losing it for a half-mile or so in the horrible deadfall near the valley floor. Just before the clearcut, I greeted a Canadian couple headed in for the same peak with big boots, and heavy packs. Sigh… I will yet teach our northern brethren how to bag peaks.