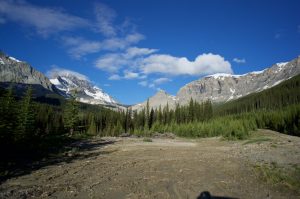 After a morning jaunt up Abercrombie, the northernmost ultra-prominence peak in the lower 48, and one of the lamest, it was time for me to head north in search of real mountains. For whatever reason, I had my least unpleasant Canadian border crossing experience; after a few questions, I left a couple apples in the freezer with everyone else’s, and headed northeast on highway 3. I had thought of skipping Harrison, the southernmost Rockies 11er, because it is buried 75 km down a network of logging roads. However, I was sick of highway driving by the time I got to Cranbrook, so I turned off toward Whiteswan Lake, making it within a few kilometers of the road’s end before being stopped by a washout. 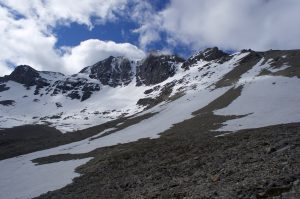 The recommended route on Harrison is a prominent couloir on its north face, but I didn’t want to hike the final bit of road in boots, so I chose the more running-shoe-friendly west ridge instead. Finding no trail at the end of the road, I side-hilled too far east to get out of the forest, then descended a bit to return to the standard route where the faint trail ends at a cascade. Three mountain goats, the day’s only wildlife, moved out of my way as I climbed the gradual slope to the base of Harrison’s west ridge. The rock layers rise to the south here, so the other side of the gentle-looking saddle was forbiddingly steep. 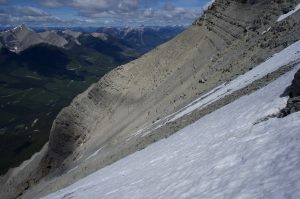 Apparently Harrison sees little traffic, as there is no use trail beaten into the scree on the long side-hill traverse to the standard southwest face. Wanting to minimize my exposure to that, I instead continued straight up the west ridge. The uplift is a bit too steep to traverse on the north side, so I mostly stuck to the ridge, sometimes following ledges right and climbing low-5th-class terrain back to the crest. The ridge changes at a notch, where I crossed a snow-saddle, then made a wandering ascent on the northwest face to the final summit ridge. 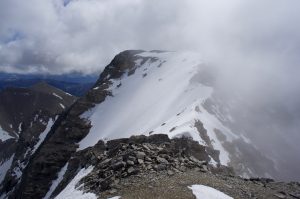 Patchy clouds somewhat obscured the view, but what I saw looked surprisingly dry and unglaciated for the Canadian Rockies. The register showed perhaps fewer than 10 summit parties per year. Canada has 54 Rockies 11ers to match Colorado’s 14ers, but they see a tiny fraction of the traffic, and only a handful of people have summited them all. 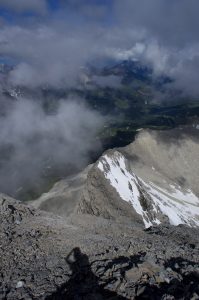 I lazed around a bit, then took off down the standard southwest chute, where I found a bit of an old boot-pack. The slush/ice was a bit steep for my running shoe crampons, but I made it work, and was soon down on the horrid scree. I found a couple cairns and a faint bit of use trail at first, but both soon disappeared, and the rest of the traverse was a wretched mix of scree and slush. If I did the peak again, I would bring boots and climb both up and down the north couloir. 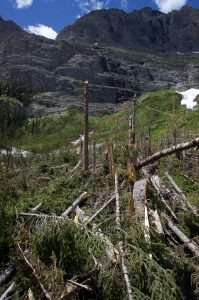 I found the faint, flagged trail on the way down, following close to the stream. I also found why I had not seen it on the way up: it has been completely obliterated by avalanche debris a half-mile from the end of the road. I balanced and thrashed through the wasteland, then jogged back to the car.

I had noticed the Lussier hot springs on the drive in, with a handful of cars parked near the sign. I normally don’t go for such things, but I asked myself “what would Renee do?” (also, “when will you next bathe?”), and stopped for a quick soak. It was more crowded than the day before, and with the exception of one surgically-enhanced Asian woman, the bathers should have worn more suit, but I soaked in the hot pool for awhile, then rinsed the sulfur off with a quick dip in the river before returning to the highway, then to yet another endless logging road. 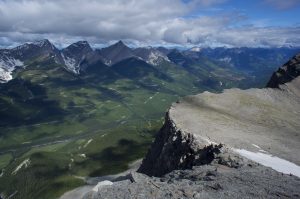 Other side of saddle

The Great White North has some wild and impressive mountains, but every time I visit Canadia, I am reminded that its economy is still largely pillage-based, with a few humans living on the profits of clear-cut logging and strip mining. In both good and bad ways, Canada today is like Colorado in the 1800s.

Other side of the saddle

Other side of saddle