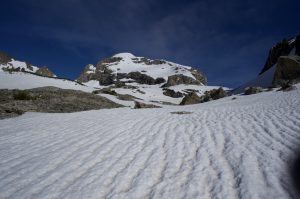 Clear skies finally returned to the Tetons, bringing with them cold nights, pleasant days, and a fleeting opportunity to ski the fast-melting snow on what turned out to be my best Teton ski day. I had climbed Buck Mountain too many times by various routes, but never descended it on skis. Its broad, moderate east face seemed more my level than the upper Middle Teton Glacier, so I set my alarm for 4:15 to beat the morning sun. Gus, one of the interns, lacked skis but had the day off, so he joined me for the climb. 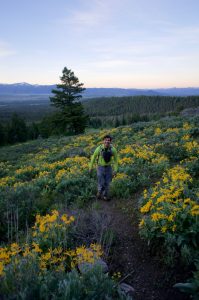 We got started from the Death Canyon trailhead just after 5:00 and, after walking a few minutes past the Stewart Draw “trail,” were soon on the correct path. The trail starts off overgrown, then turns into a bog, then becomes a real trail as it crosses an open meadow of sage and balsam-root. The two “warm-up” creek crossings were larger than I remembered, and with skis on my back, one of them involved wet feet. The main creek crossing would have been Serious Business, but fortunately there was a healthy snow bridge a few hundred yards up. 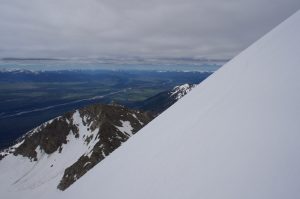 The snow was no longer continuous from the stream crossing, so I continued hiking in running shoes to the next flat section, a summer bog where Static Peak comes into view. After a bit of skinning, I put the skis back on my pack to boot up the steep, shaded slope, then left them there for the lower-angled walk to Timberline Lake. The snow was still hard in the shaded couloir leading to the face, but softened quickly as I traversed up and left onto the east face proper. Gus turned around here, not comfortable on the steeper snow, while I continued to the summit, following bits of an old boot-pack. The snow was soft enough to plunge nearly boot-deep by the end, but I did not see any slides. The rock band dividing the face was still conveniently covered in snow. 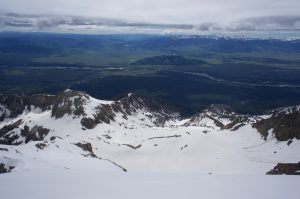 After a short break on the windy summit (the clouds were too low for a view of the Grand) I mostly transitioned (I forgot to flip the “walk mode” tabs), then had an excellent ski back to the lake. The face is 38 degrees near the top, but broad and soft enough to make me comfortable linking turns, albeit carefully in the final couloir to the lake. After talking to Gus, I bombed on down toward the bog, getting some serious speed before talking to some hikers and descending more carefully through the rocks lower down. I did another short lap of a few hundred feet while Gus caught up, then switched back to shoes for the hike out. Ironically, the first part of this “hike” involved much boot-skiing with both boots and skis strapped to my back. Though I do not normally condone the use of “cripple poles,” I found them helpful in this strange situation.