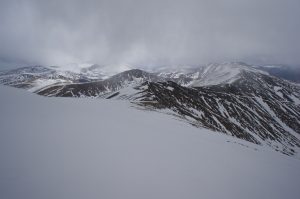 Ah, where were we? 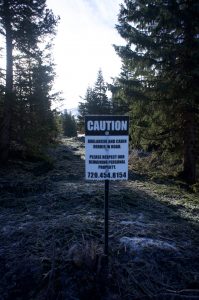 Edwards, one of CO’s 100 highest, is just east of popular Grays and Torreys, just south of I-70. I probably should have used Stevens Gulch, the standard approach for the latter, but I instead approached from the other side, via Horseshoe Basin near Keystone. Camping is limited while all the neighboring forest roads are gated, so after a noisy night at the one pullout on Loveland pass where you’re allowed to park (there was a crowd of a half-dozen cars and RVs, and a trailer probably housing an A-Basin employee), I headed back down and around to the gate, then started walking the road. 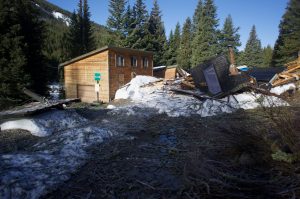 The snow was firm enough in the morning not to require snowshoes, and I enjoyed the scenery, including power lines and an utterly obliterated vacation home. Apparently the avalanches grow big here, and I’m surprised the builder didn’t look at the terrain a bit more carefully before breaking ground. Once above vacation home territory, the valley opened up and flattened, providing a snowy version of a marsh for a few ducks. 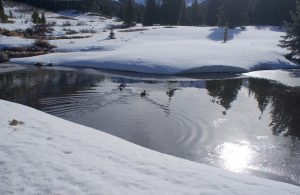 Despite some clouds, the snow was softening up, so I put on snowshoes as I finally neared the summer trailhead. I passed more mining ruins as the valley turns north, toward the saddle between Edwards and the fourteeners. The normal route takes the trail to Argentine Pass and follows the ridge, but I saw a chute just west of the summit that looked easier than side-hilling along a snow-filled trail. I could also follow a partially-scoured rise below it, which would be faster than snowshoes. 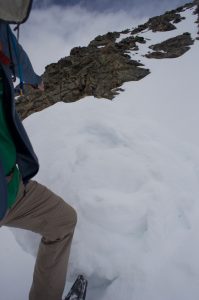 The chute was a little steeper than I prefer to climb in snowshoes, with some huge frozen pinwheels suggesting that wet slides were a possibility once it warmed up. “Fortunately” the day showed no signs of doing that, with strengthening winds bringing clouds and perhaps a few showers from the south and west. I reached the ridge, then followed bits of trail to the summit, watching the spindrift fly off north to Stevens Gulch.

Not wanting to descend my chute, I continued on the standard route toward Argentine Pass, following a few cairns along the mostly snow-free ridge, then descended a likely-looking chute and rib before reaching the trail. This was more tedious than expected, with the snow alternatingly hard and punchy, perfectly unsuitable for a glissade or boot-ski, and the rib covered in loose rock and scree. It was still faster than the trail, though, and I was soon snowshoe-plodding back down the gulch and through the house debris.