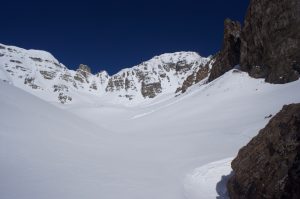 I try not to visit Aspen, as it combines some of the worst characteristics of Jackson and Boulder. But I had yet to do a couple of centennial peaks in the area, Cathedral being the first. The standard routes are south- and east-facing, so an early start would have been good. Unfortunately, I found Castle Creek Road inexplicably closed at what turned out to be a cross-country ski resort, so I slept at another trailhead and got a later start from the gate, which turned out to be about a mile down the road from the trailhead turnoff. 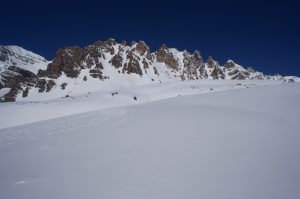 After some confusion following various snowmobile and ski tracks, I found the Cathedral Lakes trail, which quickly became solid snow. The trail seems very popular with backcountry skiers, and it was packed enough that I could follow their skin track without snowshoes. I stayed on the north side of the creek past the first headwall, where I finally had to put on snowshoes. Past the second headwalls, I finally emerged from the trees to see Cathedral’s gnarly east and north ridges, and snow-covered Cathedral Lake below. 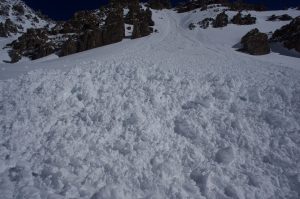 Rounding the base of this ridge, I finally got a look at my goal. The standard route reaches the south ridge via a snow-filled gully; alternatively, a steep snow-chute diagonals left across the east face, finally depositing the climber about 100 yards from the summit. I had plenty of time to choose a route as I made my laborious way across the rolling snow-plain toward the peak. 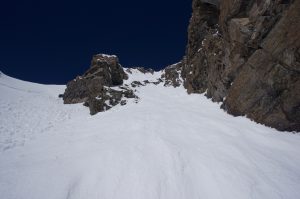 Many wet slides had taken place in the past day or two, but I did not see or hear any new activity as I approached the peak, so I opted for the more direct and adventurous east face route. Though I carried crampons, I once again had no use for them, as the snow was snowshoe-soft down low, and almost too soft for step-kicking up high. The face was completely sheltered from the wind and directly in the sun, so I was dripping sweat as I climbed gloveless in a t-shirt. The couloir seemed to have already slid, though I kept my music off to listen for the occasional snowball. I meandered back and forth seeking firmer snow, noticing some ski tracks from a day or two ago. 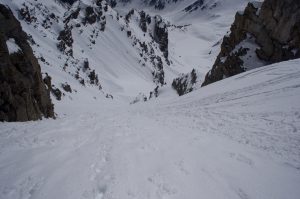 The couloir steepens as it turns left and approaches a rock constriction. Postholing and generally hating life, I stopped yet again to drink some water and catch my breath, only to look up and see a small wet slide coming toward me. It was less than a foot deep, so after a half-hearted attempt to scramble to one side, I simply planted my axe uphill (my legs were plenty well-planted) and turned sideways to minimize my surface area. Once it passed, I continued up the now-cleaner couloir with a renewed energy and sense of purpose.

Reaching the ridge, I was immediately treated to views of Pyramid and the Bells, two valleys to the west, with Capitol farther off and Castle nearby to the south. I tagged the summit, retreated out of the breeze to eat, then made my way down the standard route, with its typical Elk Range dinner-plate choss under variable snow. I took a slightly different line on the way back, following the valley bottom instead of side-hilling along the north side, and other than one steep ravine, it was mostly easier going. Aggravatingly, the road was no longer closed when I reached the car. One more day and I can leave this place…

West toward Pyramid and Bells