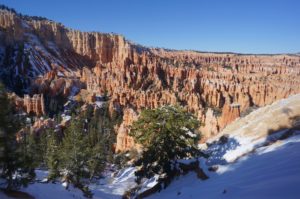 After participating in the time-honored American tradition of eating way too much for Thanksgiving, including no fewer than four species of animal, I decided to go for a long trail run in Bryce while the others did a shorter hike. The obvious Bryce run is the Under-the-Rim Trail, a 23-mile route from Rainbow Point at the south end of the park to Bryce Point near the middle. However, with a late Spanish start from Cannonville, the extra driving time to drop me off at the south end would significantly limit the others’ day, so I instead did a 20-mile, 4900-foot meander starting at Fairyland Point and visiting most of the best parts of the park. This was probably more scenic than Under-the-Rim, and while it was crowded in places, I was rarely unable to run, and the trails were wide, smooth, and well-graded. Somewhat to my surprise, Bryce turns out to be a wonderful place for trail-running, making it a fun one-day park. 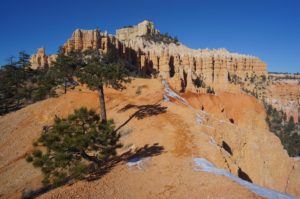 I hiked the initial descent with the others, crossing occasional stretches of hard-packed snow on shaded northern slopes during the descent from Fairyland Point. The park’s southern end is about 1500′ lower than the north, and the snow had all but disappeared by the time we reached the base of the rock formations around 7200′. I took off jogging after about half an hour, stopping to zip the legs off my pants about 10 minutes later, and stripping down to just a t-shirt after the first hour. I think the temperature stayed around 35-45 degrees, so while I was slightly cold in the shade or wind, I was mostly comfortable in summer clothing for the rest of the run. 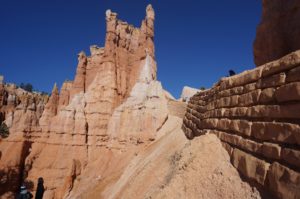 I cruised the generally downhill rollers to the Tower Bridge turnoff, took a short side-trip to this underwhelming feature, then ground out the climb back to the rim at 8000′ near Sunset Point. While the Fairyland Loop was uncrowded, the descent to the Queen’s Garden was a bit of human chaos. It wasn’t a solid mass, though, so I had fun dodging and weaving, launching around the banked switchbacks and startling a few tourists. The Queen’s Garden trail was built in Zion style, with tunnels blasted through what seemed like an unnecessary number of mudstone fins. This is probably the most scenery-dense part of the park, and I stopped frequently for photos of various Bryce-y things. 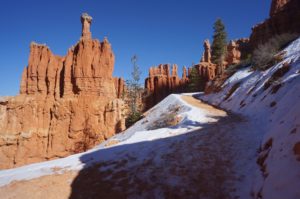 From Queen’s Garden, I continued along the base of the formations on the gradually-climbing east side of the Peekaboo Loop, then began a more sustained ascent to 8300′ Bryce Point. To my surprise, I was still fresh enough to jog the entire climb. I milled around a bit with the tourists while deciding what to do next: it was around noon, and I had agreed to fetch the car from Fairyland Point and meet the others at the Lodge at 2:30. I figured that I could do the 4-mile out-and-back to the Hat Shop, then return via the other side of Peekaboo Loop and Wall Street, thus visiting all of Bryce’s “good stuff” in one fell swoop. 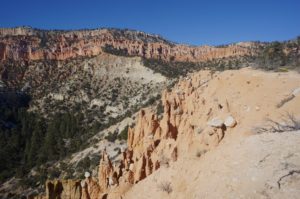 Bombing the 1000-foot descent along the start of the Under-the-Rim Trail, I passed two other runners wearing a disturbing amount of fancy logo-encrusted Lycra (“all Euro-tarded out,” as Mike put it). I wasn’t sure what to expect of the Hat Shop, but I was glad I made the detour. It turned out to be a collect of a couple dozen caprock hoodoos, some with impressively large and overhung boulders on top. After stopping to take some pictures and eat a bit more, I steeled myself for the climb back to the rim. I was definitely slowing down by this point, and had to walk some of the steeper parts of the climb. 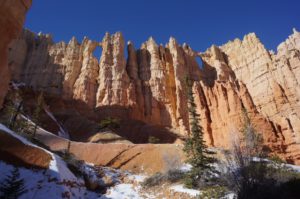 I returned almost to Bryce Point, then physically and mentally recovered as I bombed back down the snowy trail to Peekaboo Loop. The western part of the loop is longer than the eastern part, and contains much more up-and-down. I ran what I could, hiked some of the steeper bits, and distracted myself by gawking at the scenery, including a couple of impressive arches. 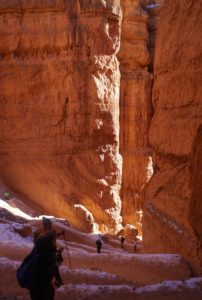 I felt sluggish as I returned to the Navajo Loop junction, so I walked some perfectly runnable terrain while eating the last of my food, then continued toward Wall Street at a slightly pathetic jog. I passed Mike and the Armada a few minutes from the junction, stopping to chat briefly before turning on the gas so they wouldn’t have to wait too long before I came back with the car. The climb up Wall Street was the only part of the trail where the crowds actually got in my way, but I was feeling worked by this point, so I didn’t mind the delay. 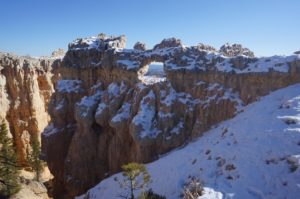 Once on the rim, I managed decent speed on the rolling but generally downhill commute back from Sunset to Fairyland Point. I had expected this section to be a dull forest run, but it stayed close enough to the rim to have consistently nice views of the nearby hoodoos and some more distant red cliffs to the northeast. I reached the Lodge at 2:30 as promised, then spent the rest of the day shuffling around like a tourist near Rainbow Point. At over 9000′, the southern end of the mesa offered expansive views of the Escalante plateau 2000′ below. It was also much snowier than the rest of the park, and I was barely warm enough in the shade with all my clothes.

Southern Utah food options are usually grim, but we found what looked like a decent pizza place in Tropic. It was clearly the only choice around, as there was a steady crowd the whole time we waited to have our order taken, waited for the food, and waited still more for the bill. Southern Utah: come for the scenery, lower your expectations for everything else.

Near the end of Fairyland

Some of the better hats

This entry was posted in Tourism, Ultra, Utah. Bookmark the permalink.