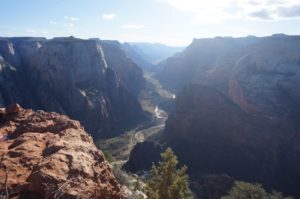 Mike was spending Thanksgiving in southern Utah with a small contingent of the Spanish Armada, and had some extra room in the car. I had already seen most of the planned route, but trips with Mike and the Armada are usually good fun, so I found myself fighting sleep across the Big Res Tuesday night, en route to Page, Arizona. There is probably some scenery along the way, including Shiprock, but other than sunset on some familiar terrain during the first hour, we saw almost nothing other than the huge and well-lit smokestacks of the Navajo Generation Station, a glowing symbol of our coal-powered future. 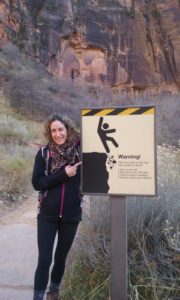 As usual, I was awake well before the others, and took a first trip through the hotel’s well-stocked breakfast bar before settling in to read and wait for the others to emerge. After a second, “social” breakfast and a sort-of Spanish lesson, we rolled out late for Zion. The park was filling up in anticipation of the holiday weekend, but the crowds were not yet overwhelming as we parked down the road from the Observation Point trailhead. 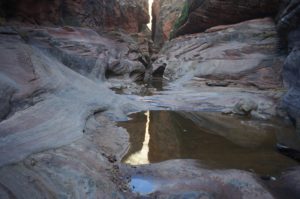 We contemplated the fact that falling off cliffs can result in injury or death, then headed up the switchbacks blasted in the sandstone. Zion was developed in the 1920s and 1930s, when man felt the need to assert his dominion over nature, and its roads and trails were constructed using quantities of dynamite and chain that would be unthinkable today. 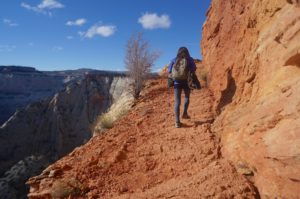 The route from the valley to Observation Point was probably somewhere between difficult and impossible in the 1800s, but is now essentially an exposed sidewalk. While it is easy walking, the exposure does get to some people: Linda was unfortunately overcome just below the rim, so only Lidia and I reached the end of the trail. We hung out with a half-dozen others for awhile, taking pictures and fending off the over-friendly chipmunks, then headed back to meet the others near the end of the short November day. We found our hotel in Hurricane, then found semi-decent and only slightly depressing food at some kind of Mormon Chipotle.

After considering several plans for Thanksgiving, the Armada dropped Mike and I off at the start of the Chinle “trail” in Springdale, then drove on to do Angel’s Landing while we headed for Mount Kinesava. There is a large dirt parking lot on Anasazi Way just off the main highway, but the useless trail dumps you right back on the road, and is probably longer. We passed some fancy houses, then found the “trail” continuing as a gated road to a water tank where it disappears. Still, Kinesava is hard to miss, so we headed in the right direction and soon found a faint, intermittently-cairned use trail through the sparse desert brush and junipers. 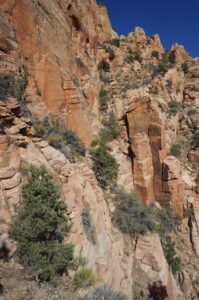 The route follows a slide through the lower cliff-band, then heads up more steep dirt and rubble to a fairly obvious left-to-right ramp leading to the plain between Kinesava and the higher West Temple. The ramp is mostly steep dirt, but there is one semi-exposed section, some third class, and a short but apparently unavoidable fourth class corner near the top. None of it slowed us down much, and we soon emerged on the grassy plain northeast of the summit. 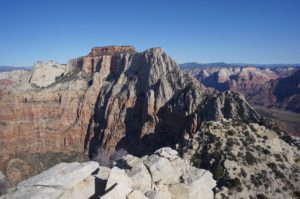 Neither of us remembered the route description for this last part, but a line straight up the middle of the summit blob looked doable and mostly brush-free. The final climb turned out to be a mixture of easy steep desert stuff and enjoyable class 3 slabs, similar to North Guardian Angel. I managed not to get dropped by Mike, and we were soon enjoying the impressive 360-degree summit view. To the north, the West Temple looked both intimidating and tempting. We had neither the time nor the information to try it, but it turns out that there is a devious route to the summit with only one pitch of 5.6-5.7; now I know what to scramble the next time I’m in the area. 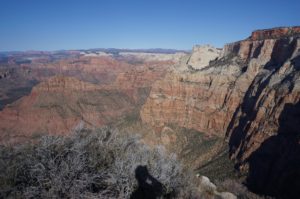 There are apparently some petroglyphs on the summit plateau, but this was a Mike hike, so there would be no sight-seeing. We retraced our route nearly to the Park boundary, then headed cross-country for a road closer to the entrance, crossing about 100 feet of private property near the end and jogging a bit of “private road.” Our road spit us out right next to the southernmost Springdale shuttle stop just as a shuttle pulled away. Rather than wait, we jogged a mile or so up the road before catching the next shuttle at another of the closely-spaced stops. Then I had an hour or so to nap and listen to the foreign tourists before the Armada returned (successful), and we were on to the next.