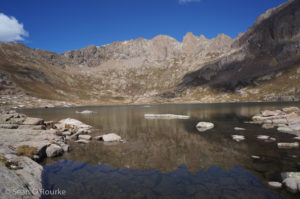 Jupiter Mountain lies just south of Windom Peak, the southernmost 14er in the Needles Range. Like the Needles 14ers, most people probably reach Jupiter via the train and the Needle Creek trail, but I am cheap, and I had already done the train-skipping run from Purgatory once this year. I therefore decided to come at Jupiter from the southeast, taking the Vallecito Creek trail to Johnson Creek. I had previously used the Vallecito approach to get to Jagged in 2012, and this time would be both shorter and technically easier. However, despite its taking less than 12 hours, this turned out to be “type II fun” for one reason: the log-jam I had used in 2012 to cross Vallecito Creek at the former bridge had washed away, forcing me to ford the thigh-deep water both ways. 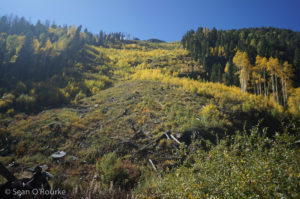 After a snafu the day before, I again started up the Vallecito trail by headlamp, this time slightly slower. For some reason this trail is a heavily-used horse-highway, and I passed the time dodging manure, horse-churned mud, and the occasional spatter of blood (hunting season?) on the jog upstream. I did not want to reach the ford too early, but it was still an hour before the sun would hit me when I arrived at the former bridge site. The trail-builders had foolishly sited the bridge in the middle of a huge avalanche path dropping hundreds of feet to the creek from the slope to the (wind-loaded) west. Predictably, the bridge had been repeatedly destroyed, and equally predictably, the Forest Service had simply given up rather than relocating the trail. 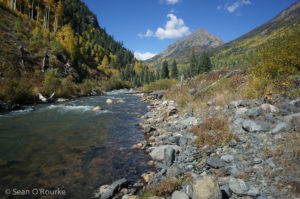 I found a suitable stick among avalanche debris, then sat down on a convenient log to take off my shoes and socks and roll up my pant legs. While it is much easier to ford a stream in shoes, I wanted to stay as dry as possible in the freezing morning. Finally, with my shoes tied around my neck, I grabbed my stick and waded in. Even this late in what is apparently a dry year, the water was about as much as I would have wanted to deal with: thigh-deep and reasonably fast. When I finally emerged cursing on the other bank, my legs tingled and my rolled-up pants were soaked. Moving slowly with stiff hands, I took off my pants to wring them out, put my clothes back on, and jogged unhappily up the trail until I was reasonably warm. I have forded deeper (Moran Creek for Bivouac) and faster (Bridge Creek for Goode) water, but the cold morning made this crossing my most miserable so far. 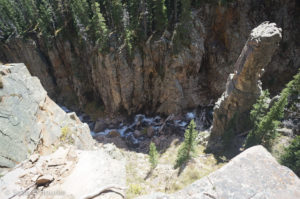 With the river now unavoidably between me and my car, I continued up the Vallecito trail, then left it on the better-located bridge to the Johnson Creek trail. This much less well-used trail climbs 3500′ from the Vallecito to Columbine Pass, before descending into the popular Chicago Basin. Surprisingly for such an old trail, it is plagued by endless maddeningly-horizontal switchbacks. Perhaps the miners who built it felt uncharacteristic sympathy for their mules, though its “ruling grade” is steep enough to make the flat switchbacks apparently pointless. Being a pack trail, it also features a couple of un-bridged stream crossings where it is difficult to avoid fording. 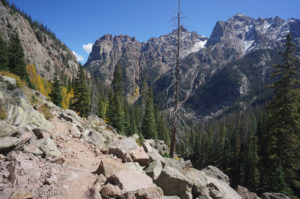 I passed one large party camped below treeline, drying out their stuff mid-morning before apparently packing out, but otherwise had the place to myself. Johnson Creek is a beautiful approach. Jagged Amherst and Organ mountains bound the creek to the south, and aspens cover the lower slopes. The creek flows through a narrow slot in places, far below the trail, dropping away in steep cascades. 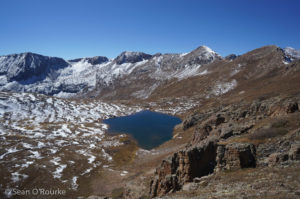 Knowing little about the terrain, I followed the trail up past Columbine Lake to near the pass, then took off toward the standard class 2 route on Jagged’s southwest face. There was enough snow hanging around on north-facing slopes to force me onto some annoying terrain east of the ridge, but none of it was harder than class 3, and the turf and boulders to the false summit were mostly snow-free. The final traverse to the true summit traverses the north side of the ridge, and the ankle-deep snow was mostly wind-packed and frozen. 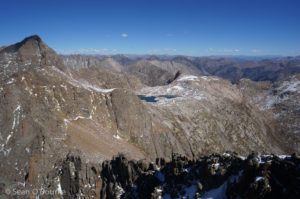 My ambitious goal for the day was to traverse southeast to Grizzly and McCauley, two 13ers on the way home, but the ridge to Grizzly looked tricky, with the usual Needles garbage-rock made spicier by the north-side snow. Knowing that I only had one more day of good weather, I decided to save my energy for the morrow. I admired Windom and an impressive lake perched at 13,100′ to its east, then headed home. 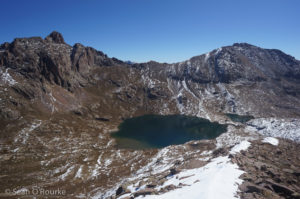 I retraced my steps near the south ridge, then dropped down a gully to Hazel Lake. Not only was this slightly more direct, but cross-country travel would be faster than horizontal switchbacks. While there was some obnoxious talus and brush lower down, most of the route was pleasant grass and slabs reminiscent of the high Sierra. I rejoined the trail near where it enters the woods, then switched into shorts for running comfort at the second stream crossing (easy ford required). Though I was worried about the water being deeper in the afternoon, it seemed to be about the same. I crossed in shoes and socks this time, and it went much faster, with the drying-off process fairly painless in the warm afternoon. The whole outing took just under 11 hours, giving me enough time to buy more junk food and drive around to Molas Pass to prepare for something a bit more serious.

Sunlight and Windom from Jupiter