A Bear and a Half 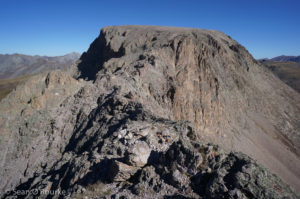 Grizzly Mountain A and Half Peak were actually pretty easy, but I couldn’t resist the title. Both peaks are on the list of Colorado’s highest 100, and both happen to be the type of half-day peaks I use to break up long drives. 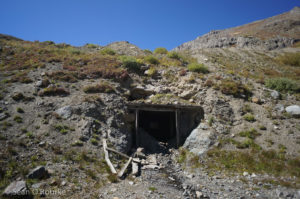 I slept just inside Colorado after doing Kings, then continued south, not sure exactly where I was headed. I had potential plans for both the Sawatch and San Juan ranges, so I made my way first to Leadville. There was a fresh dusting of snow on the peaks around town, looking more serious viewed from the north. After a brief stop in Leadville, I headed up toward Independence Pass to tag Grizzly and see what the snow was actually like. 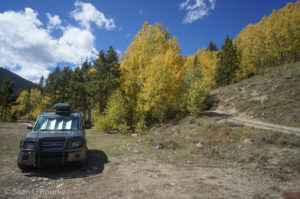 I cautiously drove the badly potholed road past the La Plata trailhead, parking at a three-way split when I probably could have driven another mile. Oh, well. After lunch, I put on my hip belt, tied a windbreaker around my waist, and started up the road. I was used to warm days in the Sierra, and was slightly nonplussed by the hat-and-gloves weather here, even at midday. 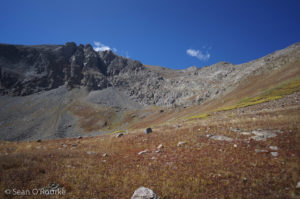 I passed a woman walking her dogs down the road, then had the place to myself as I continued past the gate to the mine at the end of the old road. From there, a line of cairns continued up the drainage before turning north before Grizzly’s cliffy southeast face. The Summitpost page complained about a loose dirt-chute getting to the east ridge, but I found it fairly pleasant. The key is to follow a vaguely-defined grassy ledge ascending from right to left, which deposits you west of some bumps on the ridge. From there, a semi-defined trail led to the false and eventually true summits. 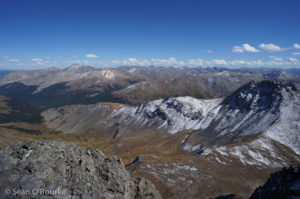 The peaks to the south still looked snowy, but now I knew that only the north-facing slopes were holding snow, and that it was meager. With fitness and a full moon, I was toying with the idea of attempting Nolan’s 14, and I now knew that the snow would not be a problem, but I ultimately chickened out. That level of sleep deprivation and suffering over class 2 terrain didn’t even sound like type II fun to me, and I knew I would have to be extremely motivated to force myself through something like that. 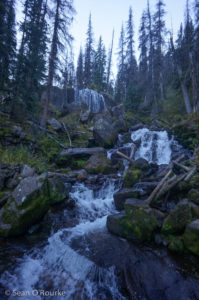 So it was on to the San Juan. I had been shut down on Half Peak during a wildly over-ambitious San Juan trip this spring, so I knew where to go as I rolled through Lake City late at night. I got a comfortably headlamp-free start around 7:00, again spending plenty of time in hat and gloves as I made my way up Cataract Creek. The creek rises steeply from the steep-walled, flat-bottomed valley above the San Cristobal Reservoir, and while the trail starts out maddeningly flat, it soon assumes a more reasonable grade. Having previously experienced this as a wretched slush-slog, I enjoyed the quick travel. 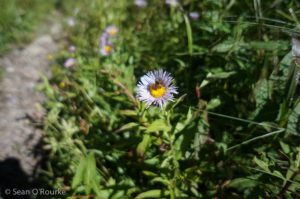 I also enjoyed the San Juans’ surprising late-season lushness. While the Sierra are brown, dead, and bone-dry by mid-September, the San Juans feature running water, bogs, and late-season flowers, including patches of asters and even the occasional columbine. My enjoyment of the greenery was, however, tempered by the decimation wrought by bark beetles in the last 20 years. While aspens and some species of evergreens (blue spruce?) survive, the majority of the conifer forests are dead and gray. I can only suggest that people visit the San Juan now, before they burn, or sometime next century, after they have had a chance to regrow. These mountains are screwed. 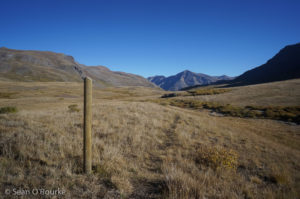 Moving on… I recognized the chute I had taken this spring, and realized just how severely I had underestimated the task in spring. Now I continued along the sometimes-faint trail, which crosses the creek a couple of times, then heads far east to avoid the brushy bog below Cataract Lake. Passing the surprisingly large lake, I turned west on the Continental Divide Trail (CDT) to begin circling back west toward Half’s south ridge. The trail meandered through rolling alpine terrain, gradually gaining elevation as it made its way toward some sort of ill-defined pass. I left the trail below the pass, heading straight up to what must be my desired ridge. 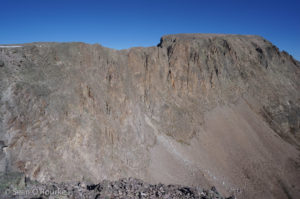 Half Peak has a distinctive shape. Its north face is 1,000 feet of near-vertical choss (if it were in Canada, people would climb it); its east and west sides are also steep and intermittently cliffy. Its south ridge is a gentle, grassy slope… until it narrows to a slender class 2-3 walkway just below the broad summit. I followed the standard route up this south ridge, looking for a more direct way east to the trailhead, and occasionally turning around to admire the more rugged mountains to the south. I found bits of trail on the isthmus leading to the summit, and a surprising lack of tricky climbing given its narrowness. 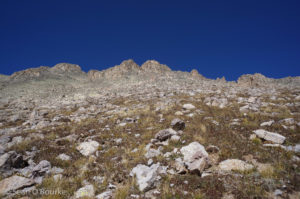 After lazing around on the summit, I headed over to the east side to check out a direct line home, which had looked reasonable from the south ridge. I found a few cairns near the top, and a bit of chossy, easy third class got me down to the lower-angle slopes below. It was slow going, but definitely faster than going all the way around to the CDT. So far, so good. 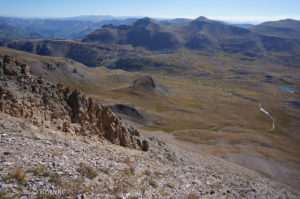 At this point, I could choose between crossing near Cataract Lake to pick up the trail on the far side of the drainage, and shortcutting down to below the brush-bog on the near side. I chose the latter, since it seemed shorter, and for awhile it worked. I made my way above a small butte on easy grass, then followed some game trails through a couple minor ravines. Unfortunately I had forgotten about the chossy cliffs above where I planned to rejoin the trail. The deer or mountain goats who passed this way had the same problem, and I began following game trails through the woody brush. The trails were surprisingly well-maintained, and saved me from almost all of the grim bushwhacking I had expected, but my “shortcut” saved little or no time over going directly back to the trail.

Morning exercise complete, I headed into Lake City to check in with the world. The library (with its friendly cat) had moved across the street since I last visited, but like most of the small southwestern Colorado mountain towns, it has done a remarkable job resisting change over the past few decades. The town was just beginning its transition from hosting jeep-ers and motorcycle clubs to hunters, before more or less shutting down for the season. I could have stayed around another day for the wine and music festival, but Lake City is not exactly a famous wine-producing region, and the music looked like it would be definitely loud and probably bad. Onward!

Looking back to La Plata

Half Peak from east

Rock glacier north of Half