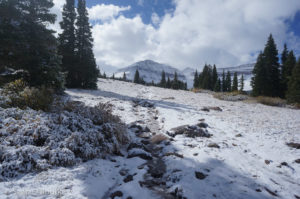 After a couple days of type I fun — Tahoe is really nice this time of year, nice enough that even I was willing to submerge myself — it was time to head back east. I had hoped my tires would last through the end of this season, but one of them decided to disintegrate in Nowhere, NV, and I got to enjoy a good part of northern Nevada at 50 MPH on a lousy donut spare. Lesson learned, I preemptively replaced the rest of the tires before heading out into the middle of nowhere. 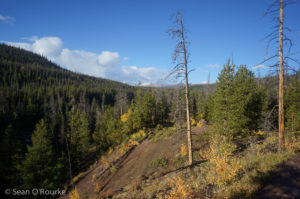 Kings Peak is the Utah highpoint, though it feels like part Wyoming. It is located in the middle of the Uinta range, an unusually east-to-west subrange of the Rockies on the far northern end of the state. I had previously tried to tag it on the way by early one summer, and was utterly defeated by the Uintas’ legendary slush-bog season. So when the opportunity presented itself this September, I gladly drove to the middle-of-nowhere Henry’s Fork trailhead, found a nice campsite near the creek for the night, and went to sleep without bothering to set an alarm. 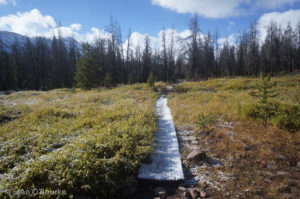 I heard some rain overnight, and woke to frozen water on my car, so I was in no hurry to get started. It had been cold enough to snow for at least part of the night up high, and I did not envy the poor folks huddled in their tents somewhere to the south. I got started about when the sun finally hit the trail, jogging the flats and hiking the hills. Thanks to an unofficial annual race, Kings has a stout FKT around 4h30, likely faster than I could manage even on a good day, so I was glad to have the snow as an excuse. The fresh dusting of white also made the Uintas, with their broad valleys and striated rock, look even more like the Canadian Rockies. 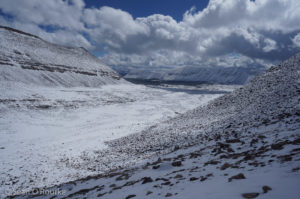 I passed some cold-looking backpackers on my way in, and finally hit solid snow just below Henry’s Fork Lake. The trail is usually a multi-lane highway, with several parallel paths worn in the turf, and ample sign of stock traffic. I found a pair of footprints leading partway to Gunsight Pass, but evidently someone had thought better of it the day before. It was cool with the partial cloud cover, and downright cold and unpleasant where the wind whipped through Gunsight Pass. 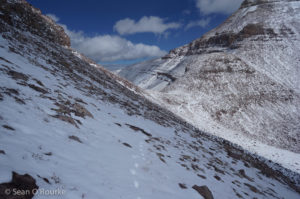 I hid in the lee of the giant cairn for a minute, then tried to follow the climbers’ trail that shortcuts around to Anderson Pass. The drifted snow made this difficult, and often made the trail a useless ledge covered in calf-deep snow. This section felt long and slow, and although I knew which peak was Kings, the fact that it is not much higher than its neighbors made me doubt myself. Most of the Uintas’ 13,000-foot peaks are bunched in this small area in the center of the range, and several of Kings’ neighbors are only slightly shorter. 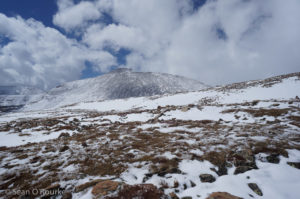 There may be a trail from the Anderson Pass trail to Kings’ summit, but I did not find it, instead slogging up large and miserably loose talus covered in drifted powder. I eventually found the (happily clearly-labeled) summit, watched the clouds for a bit, then turned for home. I had been fortunate to only feel a few seconds of graupel so far, but I could see scattered precipitation all around, and did not relish a long walk home in a flapping garbage bag. 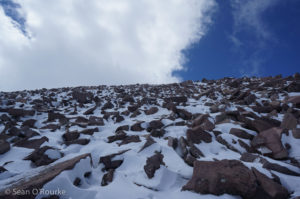 The final talus-slope was just as slow going down as up, but I picked up a bit of speed once I got back to the trail. Though there was no need, I jogged most of the downhill sections and some of the flats. Doing so made me even more impressed with the FKT, as the trail is horribly rutted and rocky; it would be tough to run with real speed even in perfect conditions. Mine was the second-to-last car to leave the trailhead, and the backpacking couple in the last were not far behind. Apparently the weather had scared everyone off; barring an extended warm and dry spell, I may have been the last Kings hiker this season.