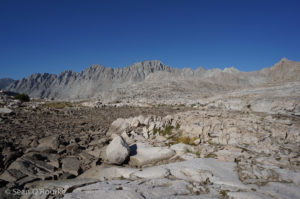 Ridge through Haeckel from valley

The Evolution Traverse, pioneered by Peter Croft in the 1990s, connects a long ridge of peaks from “Mount Steven Jay Gould” to Mount Huxley in the Evolution region of the Sierra. Thanks to mostly good rock and to Croft’s imprimatur, it sees a fair amount of attention from Real Climbers. “Evo” has been at the outer limit of my ambitions for the past couple of years, as its 5.9 rating is out of my league. However, this is a “Sierra traverse rating,” not a true YDS rating: as with the similarly “VI 5.9” Kaweah traverse, it can be made easier with a bit of creative route-finding.

After I broke my hand on Fury, I thought I was done with technical outings for the season. But after a successful outing on Williamson’s NE ridge and a scouting trip to Darwin, I decided to give it a try. Since I would rather use this part of the summer elsewhere next year, it was now or never, and I was fairly confident Evo was within my abilities. The short September days would be inconvenient, but if I could manage the 20-21 hours I hoped, there would be enough daylight for the ridge, and I can deal with the long approach and return at night. 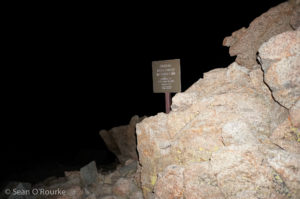 I woke to my alarm at 2:00, ate the usual Cup of Sadness, supplemented it by choking down some beet nitrates, then walked the road up to the trailhead as a sort of warmup. I didn’t remember how long the approach to Darwin Bench would take me, but I wanted to have as much daylight as possible for the technical part of the day. Moving by headlamp at the start of an anticipated 20-hour day, there is little running to be done on the Lamarck Lakes approach, as the trail is often steep and/or rough, but I at least jogged a few short flatter stretches for appearances. I had an unpleasant experience getting lost on the way to Lamarck Col a number of years ago, but had no trouble this time, even on a moonless night. 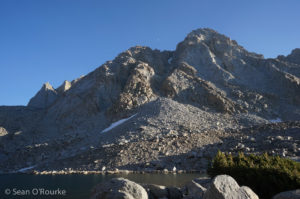 The other side of the col is still the same mess of cairns and boot-prints higher up. There is a fairly decent and efficient trail lower down, but with no chance of finding it at night, I just brute-forced my way to the bottom, where I picked up the on-and-off Darwin Bench trail. I walked through some people’s camp at night, reached the end of Lake 11,623′ (rather than the normal 11,592′), then headed up some part of Gould that I thought I could make work. Gould is a mess of gullies and fins from this side, and I had not planned to start up at night, but I had crossed Lamarck faster than expected, and did not want to waste time waiting for light. 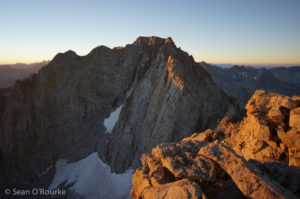 I turned off the headlamp after a half-hour of blind class 2-3 scrambling, and continued up my gully as it steepened. It was probably a snow/ice climb 10 years ago, but such things are increasingly rare in the Sierra, and I found only dirt and dirty rock. As it got steep, I moved right onto a rib via some class 4-5 terrain, then made my wander-y way to Gould’s summit. I glanced at the register (no pencil), then headed off toward Mendel. 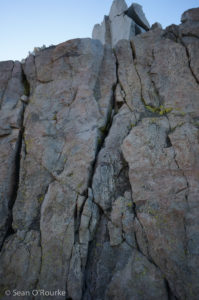 Having done the traverse through Darwin in 2012, I remembered a bit of route-finding trickiness on this part, and a short headwall with a fun hand-crack. I found the latter, and had no trouble with the route-finding. Still, this is a long connecting ridge, and it took over an hour to reach Mendel. 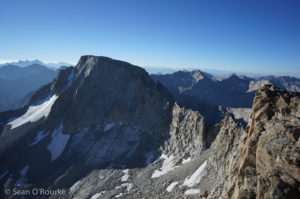 Though Darwin looks close from Mendel, I remembered that this next part was time-consuming and difficult, and that I had rappeled one section in 2012. Despite this difficulty, the first part is a virtual golden sidewalk along the top of the ridge. After this easy early progress, it is a rude shock when the ridge suddenly turns serrated broken, and loses precious elevation. After downclimbing past one or two useless-seeming rap anchors above short drops, I moved to the left side of the ridge, hoping to traverse across some of the more difficult towers on the crest. While I might have spared myself some harder climbing, I certainly did not save time, as I had to backtrack a few times while climbing up and down to connect ledges on the steep, sometimes crappy face. I eventually took a dirty gully back up to the crest, and was much happier. 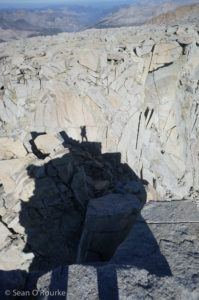 After a final, unexpected and spitefully steep downclimb into the final notch before Darwin, class 3-4 terrain lead to the summit plateau. I dropped off toward the detached summit block and then, feeling my oats, did the direct Peter Croft-style mantle up the front side. Though a friend of mine was supposed to traverse through, I was surprised to find that my scouting mission the week before was the last entry in the summit log. I signed again, then had a snack while I psyched myself up for the second scary section, from here to 13,332′. 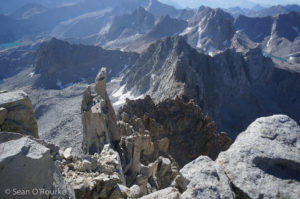 I went down the back of the summit pinnacle, then continued to the first nest of rap tat. The crappy downclimb seemed less scary than a week before, and I went straight across the golden face rather than taking whatever ugly line below it I had chosen then. Even though I had done it in the other direction just a week before, from there to 13,332′ was a mess of haphazard route-finding with a bit of backtracking — this part is confusing! I stayed mostly on the crest, bypassing a few things to the left or right. 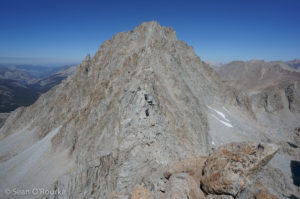 I got around the crux 5.9 crack downclimb that many people mention on the other (west) side this time, via a convoluted line that involved climbing up a chimney with an unreliable-looking semi-detached 30-foot pillar in front of it. (I banged and kicked it a few times beforehand, and it stayed put.) I may be pretty bad at climbing, but I’m pretty good at alpine hijinks. I downclimbed the fifth class big-talus south of the crack, then stupidly wasted a bit more time before getting on the obvious line to 13,332′. 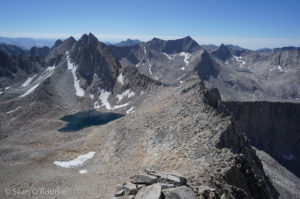 I was stoked: although I had a long ways to go, it was less than 10 hours into the day, and I was done with the scary part of the traverse. I dropped off the summit and began the long, downhill boulder-hop to Haeckel Col. It would cost very little time to drop past Lake 12,345′ instead of traversing the tricky little pyramid north of Haeckel, but I was doing fine for water on a cool-ish September day, so I stayed high. 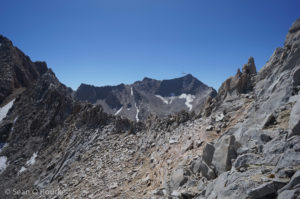 I heard the all-too-familiar sound of a helicopter just before the col, and paused my music to pay more attention. It approached the col, then made several circles around the Haeckel-Huxley cirque. I made random “I’m okay” gestures when it was near me, but had no idea how I could or should communicate. Taking several trips back to base to refuel, it eventually set up a base camp near Lake 12,021′ and extracted someone from Haeckel’s west face. I saw nothing as I climbed past this section of the ridge, but learned later that it was recovering the body of a woman who had just been doing exactly what I was doing. 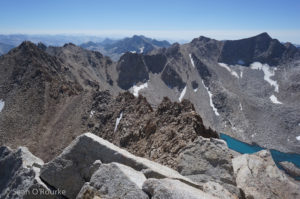 After getting past the pyramid, I found Haeckel’s northwest arête to be a fun class 3-4 romp on mostly good rock, and after mostly slow technical climbing and the descent to the col, I had the energy to move quickly. I found the register container stuck shut, and continued quickly along decent rock on the top of the ridge. Wallace is a garbage-mound, and Haeckel-Wallace Col marks the start of the traverse’s chossy section, which continues to somewhere past the aptly-named “Crumbling Spire.” I signed in on Wallace, relieved to see my friend’s entry from a few days ago, then chossed on. 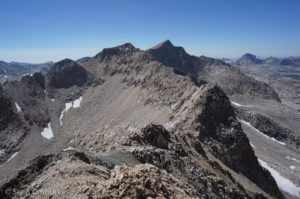 I had done Huxley-Warlow-Fiske in 2009 or 2010, and remembered that doing it in that direction felt like “petting a cat the wrong way” — walk up boulders, then downclimb steep stuff. However, I had not remembered any particularly tricky climbing, and was surprised to find quite a few 5th class sections on what I thought was the home stretch. I was getting tired, and the long traverse to Fiske seemed endless, with each technical difficulty feeling like an affront. Only when I reached the headwall on Huxley, steep enough to be thought-provoking but not scary, did I enjoy the challenge rather than resent the slower progress. 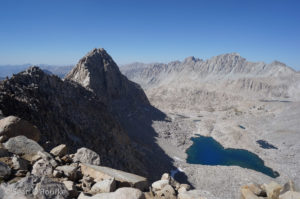 Huxley with Darwin behind

While I was happy with my time as I signed in on Huxley, I was feeling worn down, and apprehensive as I looked at the long route I must take back around Gould, up near the other side of Darwin, and over Lamarck Col, in the lengthening shadows of afternoon. I dropped down the wrong (second) gully about halfway before crossing over into the northern one to pick up a faint bootpack. It didn’t matter: after so many hours on class 4-5 terrain, I barely noticed a few 4th class steps. 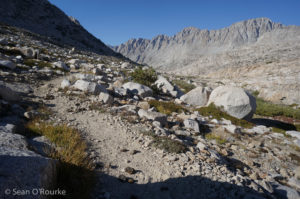 I finished my water at the base of the chute — perfect timing! — then refilled a safe distance from the Jolly Manure Trench, crammed down some pop-tarts, then took off at a jog down the trail, finding enough energy to make good time on the gradual descent. I passed the usual assortment of campers settling in for the night, then turned off on the Darwin Bench trail as the JMT dropped through the woods toward Colby Meadow. 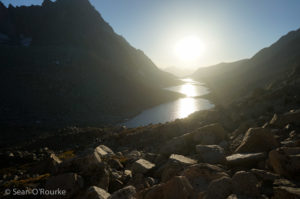 I had expected to do this section at night, but was thankful to be ahead of schedule making my way up Darwin Bench. While the trail is clear in some places, it fades in and out of existence crossing slabs and boulder-fields; it would be hard to get lost in the early moonlit night, but it would also be easy to lose a lot of time. Knowing that daylight would save me time on Lamarck Col as well, I forced myself to jog some of the flatter sections, and reached the sign at the col around sunset. Realizing that I could go under 18 hours, I ran the sandy upper col in the twilight, passing a couple camping near a random snowbank, then finally turned on my headlamp on the switchbacks just above the creek crossing. I at least managed not to face-plant as I negotiated the rocky trail past Lamarck Lake to Piute Creek, then ran past a few campers to the sign to stop the clock. I whistled happily as I wound down on the walk back to the car. It had been a good day.

I used some trail runners I am familiar with and trust on rock for the whole thing. I took 1L of water over Lamarck Col, filled up with ~2.5L before leaving Darwin Bench, then got another ~1.5L after Huxley. I had ~4000 calories of food: 5 packs of pop-tarts (2000 cal), 6 caffeinated Clif bars (1500 cal), and 3 “sweet ‘n’ salty” granola bars (540 cal). I also consumed a half-dozen salt pills and 600mg of ibuprofen. Other than that, I had standard Sierra hiking gear.

Having now done the Evolution and Kaweah Traverses, both rated “VI 5.9,” with similar levels of fitness and climbing competence, it’s worth comparing them. Evolution has a longer traverse section, a slightly harder crux (5.6 vs. 5.4-5.5), and trickier route-finding keeping the difficulty within the realm of things I can solo. However, Kaweah’s climbing is more sustained: once past Second Kaweah, there are no long choss or boulder-hopping sections. Kaweah’s rock quality is also somewhat worse, demanding some caution, though it is better in the steeper parts than one would expect given the Kaweahs’ reputation. Kaweah’s approach (Glacier and Hands-and-Knees Passes) is also much harder than Evolution’s (trail or pseudo-trail over Lamarck Col).

Somewhere on the way to Darwin

Warlow and Huxley with Goddard behind

Ridge through Haeckel from valley

Sunset on Darwin to Gould