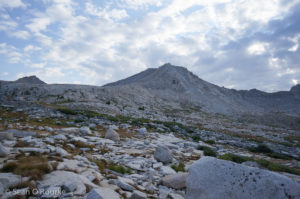 I slept fitfully, waking when the wind strengthened in my unsheltered camp, lying awake to watch the clouds wax and wane. Thankfully it did not rain overnight, but the morning’s scattered high clouds hinted that it might be another day of storms. To keep my options open, I decided to head over Valor Pass and down Goddard Canyon. If things looked good, I could head up to Davis Lake, climb McGee, and pack out over Haeckel Col or something the next day. If things looked wet and electrical, I could make my way back to North Lake via Piute Pass, staying low and on-trail most of the day. I put on my least damp socks and t-shirt, packed up quickly, and took off for the pass. 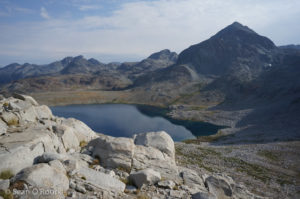 With one eye on the weather, I had a mostly-pleasant hike down to Bighorn Lake, then up to Ambition and Valor, and up to the saddle near Reinstein. The other side of Valor Pass had looked like easy slabs from the Reinstein’s northeast ridge two days earlier, but proved a bit trickier in practice. The far shore of Martha Lake looked easy, but awfully far away, so I instead hopped some difficult giant boulders on the near side, hoping to pick up some kind of trail near the outlet. My map, evidently based on the USFS maps, was wrong about this; both current USGS 7.5′ maps and historical maps show the trail ending a mile or more below the lake. 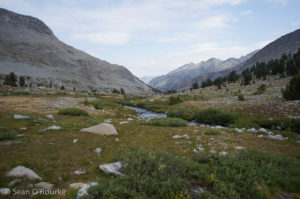 After some very pleasant and easy cross-country travel, I picked up a faint trail near where the USGS maps suggest it should be, and followed it down to the unsigned intersection with the equally-faint trail to Hell-for-Sure Pass. At this point I had to decide whether to head cross-country up North Goddard Creek (connected to the San Joaquin River, not Goddard Creek — ugh!) to Davis Lake, or to continue downstream and out. The clouds looked like they were getting serious to the south and east, so I began the long march home. 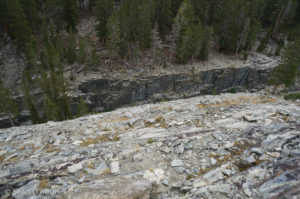 Continuing down the San Joaquin, I enjoyed the way the vertically-jointed rock caused the river to flow through slots and cascades, while the trail followed ledges above. Along the way, I was gradually reintroduced to civilization. I met another solo backpacker headed up to Martha Lake, who was as surprised to see me as I was to see him. After we parted, the trail gradually became more defined and I began to see more horse manure — apparently packers still use the first couple miles above the JMT. 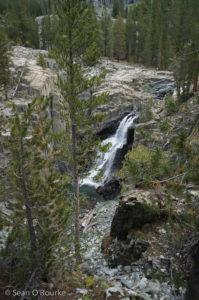 At the JMT junction, I could and probably should have gone up into Evolution Valley, on to the Darwin Bench, and over Lamarck Col, but the easiest and seemingly driest course was to continue downstream to Piute Creek. After seeing all of three people in the last 3.5 days, I suddenly found myself wading through the south-bound JMH herd. They wore various forms of rain gear, ranging from Arc’teryx down to ponchos, though none were quite as down-market as me in my garbage bag. While they all headed south and up toward certain drenching, I took off my rain-gear as I headed down and down to the junction at just over 8000 feet. 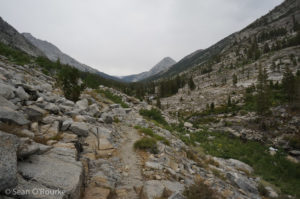 Fortunately I had saved plenty of battery and listening material, because the rest of the day was a mind-numbing slog along a pack trail. With no more peaks to climb or new things to see (I had run down this trail in 2012), I just wanted the trip to end. I was also in a hurry, as I needed to hitch a ride from North Lake back to my car.

I ground out the miles to Hutchinson Meadow with barely a pause, then stopped to cook myself an early dinner — I was out of non-cooking food, unless I wanted to drink olive oil. After 15 minutes to boil water and inhale glop, I was off again, climbing up and across Humphreys Basin, passing a lone woman at Piute Pass, then loathing every huge step and awkward rock on the pack-trail down to North Lake.

I reached the campground just before sunset, and cleaned up a bit at the spigot, still hoping that I might catch a ride with some other late hiker, though it was a weekday and I had seen no one below the pass. I slowed my pace after passing the hiker parking a mile down the road, but the only cars that passed me were driven by packers, who of course give no free rides. I eventually made it down to the main Lake Sabrina road before full dark, and hung out next to the sign a bit, but no ride was forthcoming, and it was getting cold. 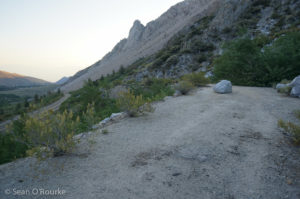 So I ended the trip with a sad bivy on the old road-bed, watching the occasional headlights pass below as I tried to sleep. The next morning, I walked the road through Aspendell to the South Lake turnoff, whistling some Bach to myself and watching the occasional unhelpful driver blow by. I was fortunately spared the 7-mile walk back up the South Lake Road by a nice older couple who used to be fire lookouts in the Bighorns. They kindly pretended not to mind my stench, and I gave them some suggestions for their dayhike. With the ride, I was back in Bishop and showered by mid-morning, resting and planning my next move.