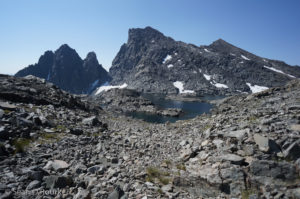 Waking up in starkly scenic Ionian Basin, I ate my morning glop, then left my camp in disarray to tag Solomons before packing up and heading west. Thinking I had the basin to myself, I was surprised to see someone perched on a rock a few hundred yards around the lake. I think we both wanted to pretend we were alone, so neither of us acknowledged the other, and the man and his partner had left by the time I returned from the summit. I went up Solomons’ south ridge, hoping for stable talus, and down the southwest slope, hoping for good sand-skiing. Neither worked as well as I had hoped, but I found no real difficulties. The peak is unremarkable from all sides, but commands excellent views of Ionian Basin and more impressive neighboring peaks like Scylla, Charybdis, and Goddard. 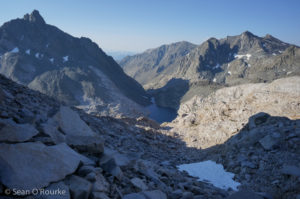 Packing up, I moved on to the lake just north of Scylla, then dumped my bedroll and food bag before heading out on an extended excursion. In addition to Scylla, I wanted to tag neighboring Hansen and the Sirens, three forbidding black peaks between Scylla and Enchanted Gorge. The Sirens were supposedly all class 3 or 4 along their west ridges, but reaching the base of those ridges looked hard. The north side, which was a friendly snowfield as recently as 2010 (a big snow year), has wasted away to an ugly mixture of packed dirt and bare glacial ice in the recent drought years. While it would be most efficient to start with the Sirens and work my way west and south, I did not want to try the miserable and treacherous slope. Instead, I headed up Scylla’s class 2 northwest slope, which was loose but bearable. 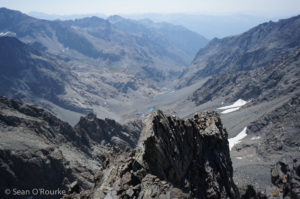 From the summit, I had excellent views of Enchanted Gorge, Ragged Spur and, beckoning below to the east, the Sirens. I dithered a bit, then began downclimbing Scylla’s east face, drawn by the prospect of reaching those rarely-climbed summits. Though covered with loose junk, the underlying rock on the face seemed mostly solid. The downclimb started as class 2, then gradually steepened and worsened. It reminded me a bit of the descent from Easy Mox in the Cascades, a blind downclimb that subtly draws you into ever-scarier terrain, all the while threatening to cliff out. I stayed north, hoping to hit the saddle at its high point. 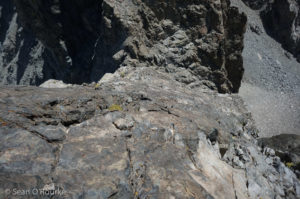 Perhaps 100 feet above my goal, I reached the limit of what I was willing to downclimb. I saw that gullies to the south clearly cliffed out, as did my line, barring some kind of miracle ledge. The north approach to the notch looked just as bad from above. The south talus-slope looked easy, though reaching it would require a long detour back into Enchanted Gorge. Retracing my steps to Scylla, I managed to break a solid-looking foothold I had been using when I put just a bit more weight on it to switch feet. Fortunately I was climbing paranoid, so I stayed put even with a gimpy hand. I left a warning to others in Scylla’s register, then headed for Hansen as a consolation prize. 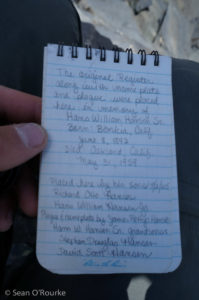 The traverse was obnoxious but not hard, following ledges over rotten class 2 terrain right of the crest. Though Hansen is higher than Scylla, it is not on the SPS list, and therefore sees far less traffic. Judging from the register, most visitors are members of the Hansen clan, who have appropriated the peak as a sort of shrine/mausoleum. I made my interloping mark, then returned to my gear stash before heading west. 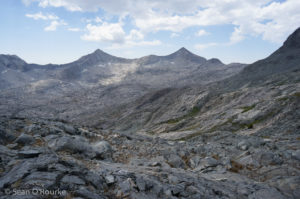 There was a bit of cliff-related frustration getting through the black rock around Lake 11,818, then travel turned more pleasant as I dropped across the grass and granite benches near the head of Goddard Creek. With more time and energy I would have scrambled up the impressive pinnacle of Peak 12,432, but it was late, and my plans for the next day required camping somewhere in Blackcap Basin. I found a few cairns on the way to the pass between Goddard Creek and Goddard Canyon (which, confusingly head in opposite directions), though I doubt the pass sees more than a handful of backpackers per year. 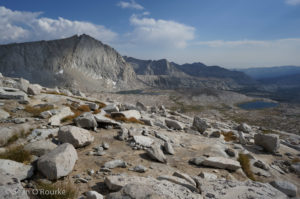 I lucked into climbing Reinstein the right way, scrambling up some steep, stable class 2-3 talus on the northeast ridge, then bombing down the standard sand route to the south. Blackcap Basin is a wonderful place to camp, with a ridiculous number of lakes tucked up against the White Divide near tree-line. It is also far from the nearest, annoying-to-reach west-side traiheads near Wishon Reservoir, so it sees few visitors. Reaching Regiment Lake, I decided that I was close enough to reach Tunemah, and set up my camp for the next two nights.

Sirens and Scylla from near Solomons

McGee and Goddard from Solomons

Charybdis and Sirens from Scylla

Scylla and Sirens from south