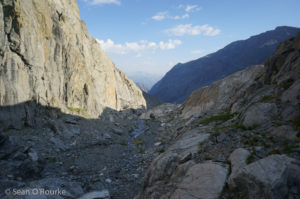 This was a true adventure day: I wanted to get from Ladder Lake to… somewhere, preferably near Chasm Lake, but had no idea what actually connected. While most of the Sierra is friendly to cross-country travel, and most internal valleys are not deep, Enchanted Gorge and Goddard Creek are neither, plunging steeply through lousy rock to 7000 feet in the heart of the range and creating Cascades-level local relief of 3000-5000 feet. Though people go up and down both canyons, I had read that the lower reaches of both are choked with nasty brush, bad enough that some people prefer walking in the river. Also, I had little desire to tackle a nearly 5000-foot climb with my still-heavy pack. 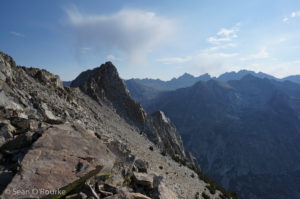 The first order of business was the Citadel, a quick class 2 jaunt from Ladder Lake. Following the terrain more than the map, I packed up easier terrain to a shoulder above the talus-choked col blind map-obedience would suggest, then headed off for the summit along a narrowing ridge requiring some third class choss escapades. Surprisingly, the register indicated much more traffic than on Langille. The Citadel is lower, slightly harder to reach, less striking, and has poorer rock quality than Langille, so the difference is hard to explain. A number of parties reported climbing a 5th class route (“The Edge of Time”), though it seems like Langille would be better for that kind of thing. 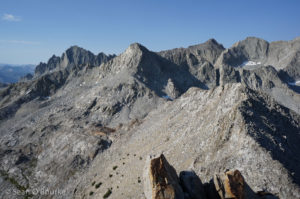 I returned to my pack, then got to the ugly business of forcing my way to Lake 10,892 below Rambaud Pass. There was of course suffering, but this sort of route optimization — choosing an objective, looking at the map and terrain, then trading off among elevation, distance, and ease of travel — is what makes cross-country backpacking interesting to me. While I need constant listening material to grind out trail, I find this mentally engaging enough not to require other stimuli. The direct ridge to Wheel looked bad, and a descent to Rambaud Creek around the 10,000 foot level would be bad, so I took the easiest path to a random ridge, then found a partially scree-able chute down to the lake. 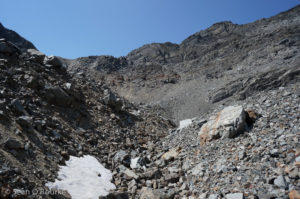 Rambaud Pass looks like an absolute nightmare, with an ugly black boulder-field leading to a steep dirt-chute below the saddle. However, the boulders are less bad than they appear, and there is a left-trending ramp leading to a point right of the saddle that avoids the chute. From the pass, I could see almost 5,000 feet down in a straight line southwest to Goddard Creek, and across to Tunemah, 5,000 feet up the other side. 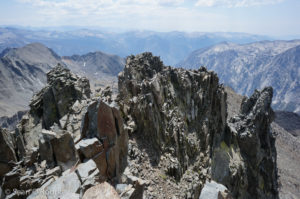 Turning aside from that for now, I headed up the long, mostly easy ridge toward Wheel Mountain. The fun ended at the shoulder southwest of the summit, where the broad ridge disintegrated into a series of ugly choss-towers, each a few feet higher than the last. I third-classed my way awkwardly through with my heavy pack, eventually finding the highest, and couldn’t resist misquoting “Full Metal Jacket” in the register: “I didn’t know they stacked shit that high!” 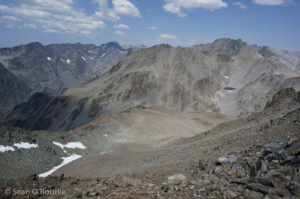 Now it was time to decide how to head off into the unknown. Perusing the register while having lunch slash stress-eating the rest of my sausage, I saw that people had traversed north to McDuffie, and that Jonathan had crossed from Tunemah Lake. I rejected the first because I did not need to break another hand on the Black divide, the second because “brush-fest,” and chose a third way instead. 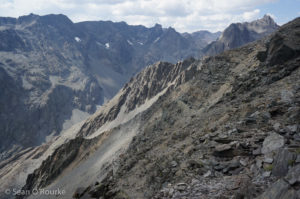 Leaving the summit, I dropped down bad talus and decent sand to the plain to the northwest, then into the drainage north. I managed to avoid most of the loose stuff by staying on a faint ridge in the boulders, then refilled my water while crossing the mostly-buried outlet stream of a small lake. With only one loose gully crossing, I made it to pleasant travel across low-angle turf and rock near Benchmark 11,512′. 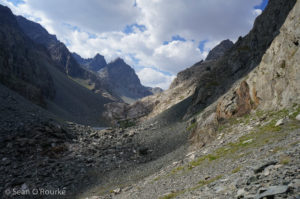 Every bit of progress up this side of Enchanted Gorge meant less elevation lost, as the stream rises rapidly through this section. This side-stream would deposit me around 8,500 feet — prime brush country — the next at 9,500; if I made it through that one, I could probably traverse right into Ionian Basin above 10,000 feet. Unfortunately, the traverse became steeper and looser, and a solid-looking wall of rotten cliffs appeared to block exits from the next gully below 11,500 or 12,000 feet. Looking at the map, it seemed that I might be forced right over 13,300 foot Mount McDuffie, something I had been trying to avoid. 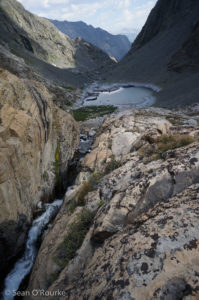 I thought for awhile, then decided that the least-worst option was to drop almost 2,000 feet into the Enchanted Gorge, then come right up between Scylla and Charybdis to reach Chasm Lake. This decision was supported by necessity, literature, and a desire to see the rarely-visited Gorge. After some decent scree-ing up high, the descent was straightforward and only moderately loose, depositing me in the talus-choked ravine next to Disappearing Creek just below an unnamed lake. 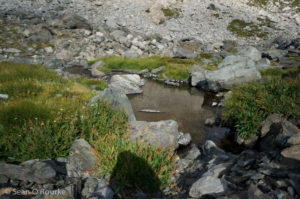 Flowing between two colliding choss-slopes, Disappearing Creek does in fact disappear and reappear as the valley bottom flattens and drops. This is not remarkable: much Sierra water can be heard flowing under boulders, tantalizing and inaccessible. However, Disappearing Creek is remarkable for its thorough and sudden transitions. The first lake I encountered was fed by a raging cascade, but had no visible or even audible outlet. And at one point higher up, the creek completely surfaced and burrowed deep underground in no more than 50 feet. 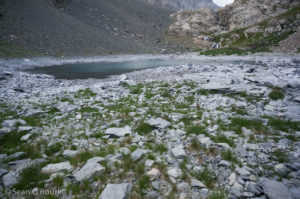 This first lake’s depth apparently varies by 10 feet or more, and it was surrounded by a ring of white deposits on the dark boulders. The combination of this light ring, the dark talus, the pink headwall, and an eruption of purple and yellow flowers made a striking scene that was difficult to capture on camera, even more so in the flat light of an increasingly cloudy day. Enchanted Gorge is a grim slog, an endless talus-march up high and (apparently) a brush-bash down low, but it is a remarkable place. Those wishing to visit should probably go up rather than down, as the talus is easier going up than down, and the scenery’s “dramatic arc” works better (or something). 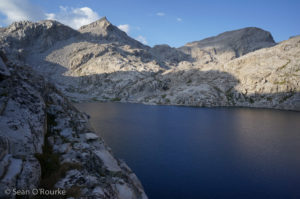 I eventually reached the narrow outlet of Chasm Lake, and had to choose a side. I chose west, since that was where I was ultimately headed, and was promptly and severely punished. After third-classing around a cliff near the mouth, I was driven away from the shore again and again, gradually traversing higher through slabs and talus infested with late-season mosquitoes. It was growing late, and while this meant great sunset views of Charybdis behind, I was increasingly tired and desperate to find a flat place to camp. 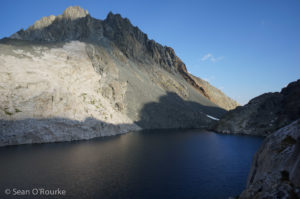 Most of the way around the lake, I was 100 feet or more above its surface, and abandoned hope of camping near the inlet. Instead, I gritted my teeth and climbed on up to Lake 11,592′, where I finally found a good spot at the base of Mount Solomons, my next objective. I set up my bivy, shoveled down some hot nutrient glop (rice-based, I think), and settled in to my typical bivy-sleep. Since I go to bed around dusk (7-8:00), I tend to wake up several times in the night, even more around a full moon, when the white Sierra granite makes it almost as bright as day. I’ve grown not to mind it: staring at the silent stars is relaxing, and I seem to get enough sleep in bits and pieces.

Tunemah and Finger from Rambaud Pass