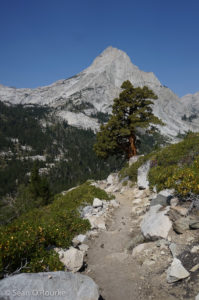 I picked up a permit listing a vague 6-night version of my plans in Bishop, then drove up to the South Lake trailhead to sleep in the overnight lot. I was shocked to find people parked in the overflow a mile down the road on a Thursday evening, but fortunately there was a single, relatively flat space in the lot for me to sleep. I had packed my pack the night before, but had to completely yard-sale it to add the sleeping bag I used as my blanket in the car, so I had some time to chat with my fellow parking-lot-sleepers before heading off into the wild. 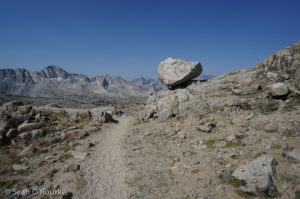 My first job was getting to “the wild.” South Lake is a mercifully high trailhead, but I unfortunately had to grind out a dozen miles of nasty pack trail to reach my jumping-off point. From South Lake, the trail climbs to Bishop Pass near 12,000 feet, then drops to around 9,000 feet to join the John Muir Highway at the Le Conte Canyon ranger cabin. The JMH is normally crowded, and is even more so this year, perhaps thanks to the popular “Wild” book and movie. Indeed, the wandering, free-spirited Muir seems better commemorated by a true wilderness like the Bob Marshall, while the trail could perhaps be renamed for Horace Albright (explanatory PDF), whose well-intentioned efforts to save the wilderness by making it more public-friendly (e.g. by feeding bears) led to a non-wild situation that is taking decades to fix. 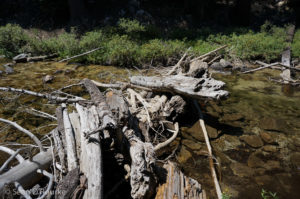 I stopped for lunch near the cabin, half-hoping to talk to the ranger. He and his girlfriend/co-ranger were in, but not especially outgoing, probably because they were about to take off for some quality time away from the constant company on the JMH. I finally asked him about the next leg of my intended route, and he discouraged me from taking it without providing much more information. I finished eating, then ignored his advice and continued as before. 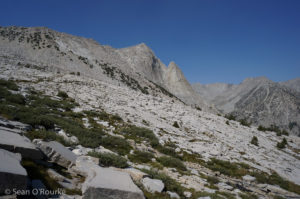 I crossed the creek on a convenient log bridge just upstream of the cabin, then followed some branching and fading use trails uphill through the forest before breaking out onto slabs around the creek leading down from Hester Lake or one of its neighbors. I refilled water at some random tarn, drank as much as I could, then dropped my pack to head up the turf and boulders on Langille’s south side. Despite its impressive appearance from the east, Langille is only class 2 from the “back,” and sees few ascents. One of the backcountry rangers was the last to sign in, after a recent visit to the Le Conte couple. 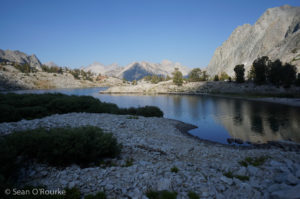 After returning to my pack, it was time to see how hard the traverse to Ladder Lake actually was. As it turned out, while it required a lot of talus-hopping, including a section of unpleasant loose dinner-plates, and some up-and-down, the line I had spotted on my map went at no harder than class 2. From near my tarn, I headed southwest to Lake 11,654, then passed through the easternmost of two gaps to its south. The gap held some snow-patches, a welcome break from the talus, and I soon found myself looking down toward Ladder Lake. A surprising amount of the descent featured obnoxiously loose talus, but nothing unusually difficult or treacherous, and I soon found an old campsite on a peninsula south of the lake, from which I watched the sunset on the nearby Citadel and the Palisades across Le Conte Canyon to the east.

Goode and Hurd on the way to Bishop Pass

Drop from Dusy into Le Conte

Slab-cut next to the Le Conte trail

You can stick to these

South down Le Conte from Langille

Dusy and Palisades from Langille

One response to “Uglies 1: South Lake to Ladder Lake; Langille”