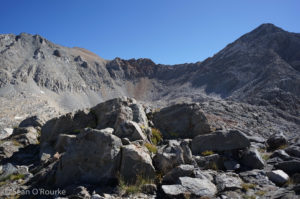 Taboose Pass is a once-a-year approach for me, and today was it. I don’t mind the 6,000 feet of gain, the various loose trail surfaces are tolerable on the way up, and the colorful cliffs to either side are beautiful in the usual morning light, as is the view of Arrow and Ruskin from the pass. Only in descending the pass, usually after a long and tiring day, does it reveal its fundamental hatefulness. Slightly tired and moving at a steady pace, it took me just under 3 hours to cover 7.5 miles and 6000 feet up. Going down the same took 1h45, despite taking the final sandy mile or so at a full run. In other words, the trail surface is so bad that it is impossible to average more than a fast walk. Indeed, some parts are slower going down than up, an unusual situation traveling cross-country and an evil miracle of bad trail-building. 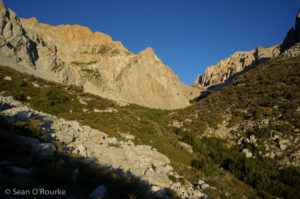 My ambitious plan for the day was to start by going around the day’s Challenge peak, unofficially-named “White Mountain,” to Pinchot Pass on the JMT before traversing back around to it via Wynne, Pinchot, and “Striped South.” This would net me two SPS peaks and a previous Challenge peak, putting me not quite within reach of catching Scott, but perhaps close enough to make him work for the Polka-dot Jersey. Of course, he needed no such motivation, and would put in a ridiculous final day no matter what I did. I did not know anything about the ridges around Striped South, and it turned out that the traverse to White would have been loose and scary, so I had to settle for three out of four. 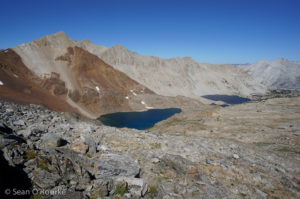 Robert had expressed interest in joining me on this adventure, but after falling behind below the pass, decided to just do White, so I had most of the day to myself. I passed a group of Boy Scouts on the way down to the JMT, then ran into the usual mid-August traffic along the popular trail on the way south to Pinchot Pass. I had gone this way a few years ago with Bob and Pat on the way to Ickes, so the route was familiar as far as Lake Marjorie. Leaving the trail at the pass, I found surprisingly decent class 2 rock leading to Wynne’s summit. 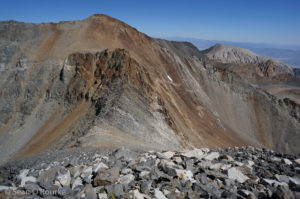 Though both Wynne and Pinchot seem like they should be class 2 rubble-piles from all directions, there is a surprising craggy feature on their connecting ridge. Taking a hint from Wynne’s register, I stayed near the ridge and found a bit of third class and generally decent rock. Past this feature, the climb to Pinchot is the expected class 2 talus-pile. I thought I was making good time, but found in Pinchot’s register that local runner Phil Kiddoo had done the same route nearly an hour faster. Sigh. 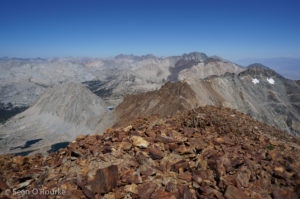 The choss-ridge to the north did not look appealing, serrated on top and loose on the sides. I stayed near the crest descending from Pinchot, finding a bit of third class getting around some drops, then followed a sheep-path on the west side around some pinnacles. It was not as bad as it looked, but still time-consuming. The rock quality suddenly improved as I reached the intersection with the ridge to White, just short of Striped South’s summit. However, the first half of that ridge was crappy, red, and steep, looking just as bad up close as it had from a distance on the JMT. It might turn out to be loose 4th class, but I was not in the mood for that kind of physically and mentally exhausting climbing. On the good side, the ridge would likely foil Scott’s plan to traverse around to Striped from White. 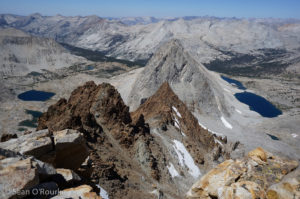 I decided to deal with White later, and continued to the nearby summit. The register, placed by Sierra Challengers in 2014, had seen all of two people since, one of them a sheep surveyor. I eyed neighboring Striped and White as I ate, contemplating my next move. The ridge to Striped was supposedly class 3, but looked intimidating, and I had already done the peak, so I decided to drop down to the lakes between White and Striped South, then maybe do the 1500-foot climb to White from there if I felt like it. 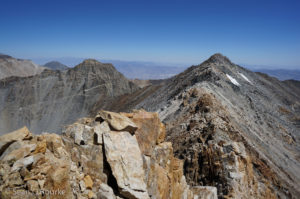 I followed the ridge a short way north toward Striped, then began descending what I hoped was a “scree-able” chute. Unfortunately, what I found instead was loose talus mixed with outward-sloping slabs covered in ankle-biting scree. Partway down, I tapped a rock with my foot to see if it was stable, and it rolled a few feet, then broke into several pieces. Wonderful.

After the tedious descent, I was in no mood to deal with White. I filled my water at the nearby lake, replacing the ice-ball that had formed when I added too much snow at a patch along the ridge, then cut cross-country to the trail just below Taboose. From there, it was just an hour and 45 minutes of frustration to the trailhead, where Jim was kindly waiting with cold beverages. As usual, Scott was still out doing something else. His original plan thwarted by the ridge, he had chosen to do Cardinal and a neighboring unnamed peak, adding another few thousand feet of talus-slog to his day. I’m getting too old to compete with that.

Arrow and Ruskin from pass

White and Pinchot from Pinchot Pass

Nice ledge between Wynne and Pinchot

A rabbit lost its tail?