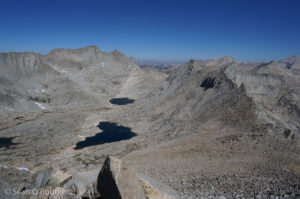 Mount Morrow is buried deep in the wilderness north of French Canyon, behind Merriam and Royce. I had passed nearby in 2013 on a backpack from Onion Valley to Rock Creek, and done Merriam, Royce and Feather a few years earlier, but had never dayhiked over Pine Creek Pass. This was expected to be a long day, which meant a 5:00 start from the Pine Creek pack station. With its low start and packer-ravaged trail, this approach is best begun in the dark, completing the initial climb while the sun gradually illuminates Peppermint Peak to the northwest. 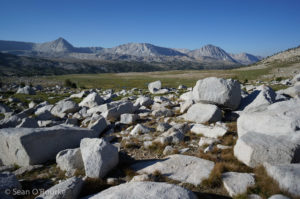 There was a respectable crowd at the start, which quickly separated on the climb. I traded the lead with Bob as we climbed past a couple lakes and through the woods toward the pass. After a short rest at the lake, I left Bob to run into the broad glacial canyon on a generally pleasant trail. After passing the impressive falls from the outflow of the Royce Lakes, I found the very faint, unsigned start of the abandoned Merriam Lake trail upstream of its outflow, and re-climbed 600 feet of the elevation lost from the pass. (On my return, I found that there are two abandoned trails to Merriam Lake, one on either side of its stream. For some reason the downstream one has been signed since I backpacked through in 2013, though it is unmaintained and somewhat less pleasant than the upstream one.) 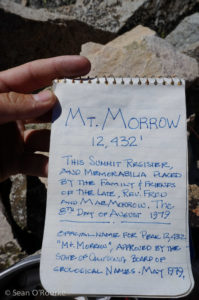 Following Bob’s suggested route, I stayed near the crest of Morrow’s broad east ridge, crossing a minor sub-summit and a short exposed section while weaving my way up class 2-3 slabs. The final climb up the south face near the ridge is a mix of talus and sand, but not too loose. I looked around the east end of the summit a bit, then found the register in an old camping pot on the west end. It held some information about Pastor Morrow, and a copy of an official naming application (possibly not approved). 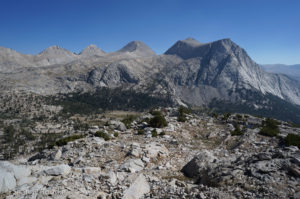 I waited around for a half-hour hoping for some company, then headed north to tag a couple of bonus peaks when I started getting cold. The ridge looks tricky, but as I remembered from my last trip through the area, ledges and benches on its west side keep the traverse mostly efficient class 2. Reading through a nice old register on the first peak, I watched Bob and Eric making their way to Morrow’s summit, then continued to the next bump. 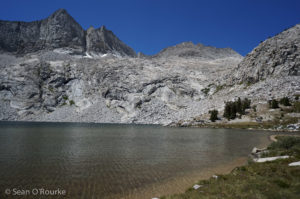 This one proved more difficult than the first: a couple of rotten gaps in the ridge required some third class downclimbing, and the summit itself appeared to be class 3-4 by the easiest route (from the south). This one also had a register showing occasional traffic, though it was much newer. It was early enough that I was tempted to traverse on around on the ridge past La Salle Lake to Feather. 2009 me would have done so, but 2016 me, being wiser or at least more middle-aged, decided that that sounded like an epic in the making. Instead, I retreated south to the “pass” I had used in 2013, then descended past Merriam Lake and down the other trail to French Canyon.

The rest was just a trail commute, 1100 feet up to the pass, then 3800 down to the trailhead. I passed poor Bob soothing his toes in the lake at the pass, then focused on my music as I jogged the pack trail home.