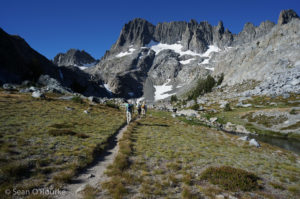 I was feeling down on the Sierra after two days climbing lackluster peaks, and I needed something to cheer me up. The Challenge peak of the day was Mount Bartholomew, an apparent talus-heap west of the Minarets, reached by much dusty trail through the woods from Devil’s Postpile. I hear it turned out to be reasonably fun, and to have good views, but a group including Renée and JD was going to the nearby Minarets, and I had unfinished business in that small group of jagged summits. 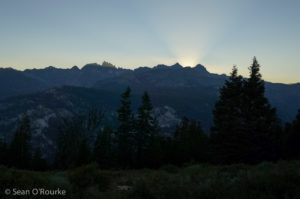 I normally camp near Minaret Vista for cool air and fewer bugs, but it actually seemed to get colder as I drove down the one lane road to Agnew Meadows. Once I figured out the confusing mess of parking lots, I quickly found JD and Robert but, as our 6:00 start time approached, I saw no sign of Renée. While the others started out up the trench of dust and horse manure, I located Renée and Chris in one of the other lots, then stood around getting cold while they got ready. (They were coming off a 12-hour day and a long drive.) 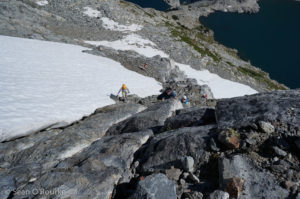 We finally got started a bit after 6:30. I normally start the day walking, but they’re both runners (Chris is a pro), so we jogged the trench, catching JD and the rest between Shadow and Ediza Lakes. With horses not allowed past Ediza, the trail dramatically improves, and I enjoyed the alpine views as we hiked the sort-of trail past Iceberg to Cecile Lake, where we met James and his friend, whom I did not know. 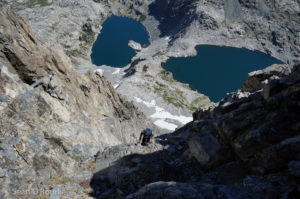 Together, the group of seven swarmed up the slabs and turf to the base of the Rock Route on the right side of Clyde’s east face. Sensing the potential for rockfall, and not having helmets, Chris and I peeled off to the neighboring Starr Route, which is slightly stiffer class 4, but with less loose rock and more fun. I was worried about climbing with only 1.5 hands (broken 4th metacarpal), but after a bit of adjustment I found that I could use my partial right hand for balance and figure out a sequence of left-handed moves. 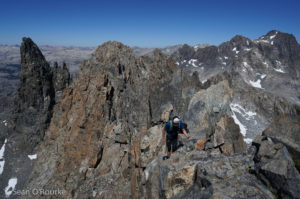 We topped out slightly ahead of the others, finding Loren waiting just below the ridge headwall. He had started off on-time and running fast, and is a strong climber, so I’m not sure why he waited. Anyways, I found a workable variant left of the (standard?) chockstone chimney, and popped over the ridge to a spectacular view of Michael Minaret, my original goal for the day. The rest of the group made its way down the crux step piecemeal, and eventually the eight of us assembled on Clyde’s summit. 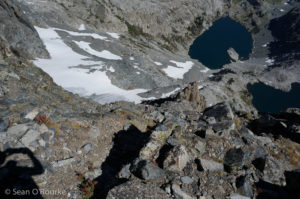 It was just after noon by the time the photos and hijinks were done. I remembered the traverse to Eichorn taking awhile with both hands some years ago, and Michael is farther still, so even if I could manage it in my current state (right hand uphill on the way out), it would be a long day. Lazy and pathetic, I retreated down the Rock Route, which was loose and a bit unnerving with so many people.

Things became more pleasant as we reached the slabs and trail, then started jogging near Iceberg Lake. Chris set a moderate pace that was probably frustrating for him, and we were making good time eating up the awful miles back to Agnew Meadows. Unfortunately, right as we reached the climb out of the valley toward the meadow, we came upon a large pack train. “You’ll have to stay behind us until the top of the hill,” we were sternly told. So we did, walking slowly up a trench full of sand and pulverized manure, dodging fresh piles of the same and a bonus lake of piss. Irritation fueled me enough to jog the rest of the way, thinking about negative externalities and the futility of trying to ban livestock from our National Parks.

Hanging out below the summit