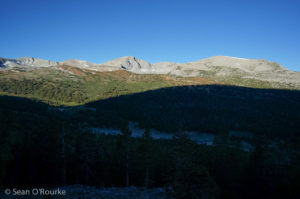 After dinner at the Mobile Mart (I brought my own), I drove up Tioga Pass for the next day’s peaks in Yosemite. Hoping to camp at my usual pullout on Saddlebag Lake Road, I was dismayed to find it already full of blatant campers; even the nearby trailhead I sometimes use was full. I finally settled for a lousy spot along a wide section of the road, and went to sleep with the occasional passing car’s lights flashing through my windows. I was up at 5:00, and at the Mono Pass trailhead by 5:40, but it was already full, and I ended up parking in an overflow pulloff a couple hundred yards up. Welcome to summer in the wilds of California, I guess. 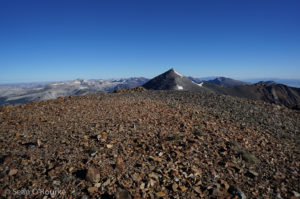 The day’s Challenge “peak” was a pair of bumps on Kuna Crest, a broad ridge leading from Mammoth to Kuna Peak. To leaven an unusually short day, I added Mount Gibbs, which is not connected to the others, but is nearby and on the SPS list. I stuck with the group, talking to Loren about various ambitious Sierra things past and future until he split off for Mammoth, then left the others when they took the trail toward Spillway Lake. I left the trail at an arbitrary point in the woods, and found myself near Gibbs’ broad southwest ridge. It turned out to be exactly the talus-pile it appeared to be, but was thankfully mostly stable, so after some climbing and a traverse along the south ridge, I reached the summit without too much pain. 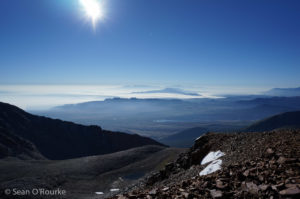 The fires to the southeast had left a layer of smoke, creating an interesting view of the hills in that direction. After signing the register, I retraced my steps, then took a more direct line toward Kuna Crest South. Getting down Gibbs sucked, but the rolling meadows over toward Spillway were pleasant. After a bit of a brush-maze getting around the lake, I headed straight up the talus ridge toward the summit. I passed Jim just below the summit, where I found a crowd of ten or so who had come straight to the peak. 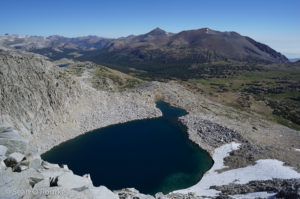 I paused only briefly before heading north along the ridge toward Mammoth. I had hoped (as had Bob) that it would be pleasant slabs, grass, or even compacted sand, but it was mostly a time-consuming boulder-hop. I stood on a few things that might be Kuna Crest North, then continued to Mammoth, still hoping to catch Bob. I missed him by about 15 minutes but, after dropping straight east down from the summit, finally enjoyed some pleasant, easy travel through meadows and open woods to the trail about a mile from the trailhead. I cooked my post-hike meal while being buffeted by constant passing cars, then carried my chair and pot back to the trailhead, which was at least slightly isolated from traffic. Ah, the majesty of Yosemite.

Ritter and Lyell, among others