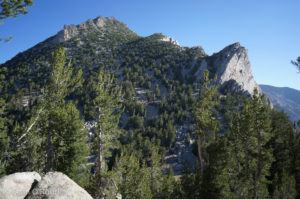 After a rest day around Bridgeport, it was time to begin the 2016 Sierra Challenge. I have not done one of these since 2013, and the event has grown despite the peaks becoming even more secure. Coming off time by myself in the spectacular north Cascades and the Pacific volcanoes, it took some adjustment to start hiking the bland dregs of northern Yosemite with a crowd. On the other hand, the nights are cool and clothes dry here.

I greeted some familiar faces in the predawn at Twin Lakes, then took off with the crowd at 6:00 through a sea of giant RVs. After a photo a bit up the trail we began to split up, with one guy running ahead, and the rest finding their pace up the pack trail. I got passed by everyone when I stopped to put on sunscreen, then passed them back one by one, catching up to the rest as they sat at the supposed junction with an old trail leading to a lake below Hunewill. 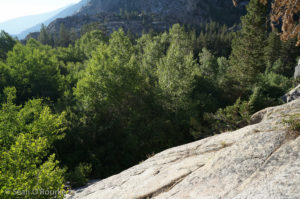 I sized up the brush then, fortified by my recent Cascades time, boldly plunged ahead. I wove through various gaps in the dense aspens and what-not, eventually finding a gap along the left-hand cliff leading to bits of something a bit better than a game trail. I intermittently ignored and followed this trail toward the lake, laughing to myself at the crackling sound of thrashing humans below. Evidently only Chris and I managed to find this route, while the rest suffered mightily. 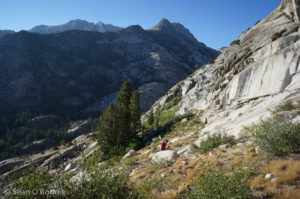 I slowly drew ahead of Chris on the long climb to the lake, then struggled up a steep sand chute to turn the corner to Hunewill’s southwest face and ridge. There I was faced with an endless slope of sand and brush. I followed sheep trails where I could, but still hit at least one brush dead-end, and it was slow going. Worse, it wasn’t the summit, but some nameless peak to its west, without enough prominence to give me points. I continued through the dip, failed to find a register, and sat down for a snack. 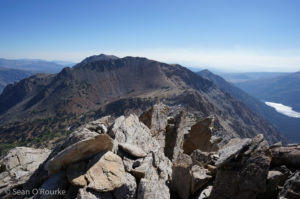 The ridge ahead looked long and slow, and it was windy, so I found a sheltered spot to sit and wait for others, then follow the crowd. After around 20 minutes, Michael surprised me by popping straight up the south side of the summit. It turns out he had studied the map, and figured correctly that the direct sand slope would be miserable, but still faster than the roundabout way the rest had taken. We waited a bit more, and eventually Bob and a few others arrived.

Bob had already done most of the peaks to the east, and wisely decided to return via the sand. Since the others decided to continue east, and I had nothing better to do in Bridgeport for the better part of a day, I did likewise. We descended some obnoxious class 2-3 to the saddle with Victoria, then traversed across some loose chutes north of the serrated ridge to reach its west face. The face was much more stable than it looked, and I made good time to the crest, passing Eric and Jonathan headed in the other direction. From there it was an easy traverse to Victoria’s summit, then on to Eagle, passing through a strange stripe of volcanic rock along the way. 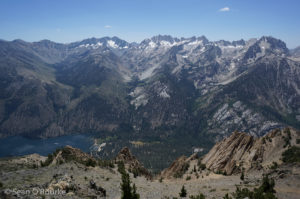 As I descended to the broad plain leading to Robinson, I saw a figure below, and knew he must be with the Challenge. It turned out to be Karl, who had started from a different trailhead, and intended to do Eagle and perhaps its neighbors. We talked for awhile, then I dodged trees and brush up to Robinson’s summit.

From here it was about 3500 feet straight down to my car by the lake. I headed east a bit, then turned south on a sort of ridge leading in the right direction. Following game trails, I settled into a ravine that went from pleasant sand to increasingly dense and rigid brush. After a traverse right and a couple of desperate brush battles, I ended up on an open, brushy sand-slope with just enough game trails to make it miserable but efficient. I emerged from the wilds to find that Bob had been back about an hour, time enough to swim and start work on the Challenge spreadsheet. After finding the showers closed, my hiking clothes and I took a quick swim as well, after which I hung out eating and watching the others trickle in.